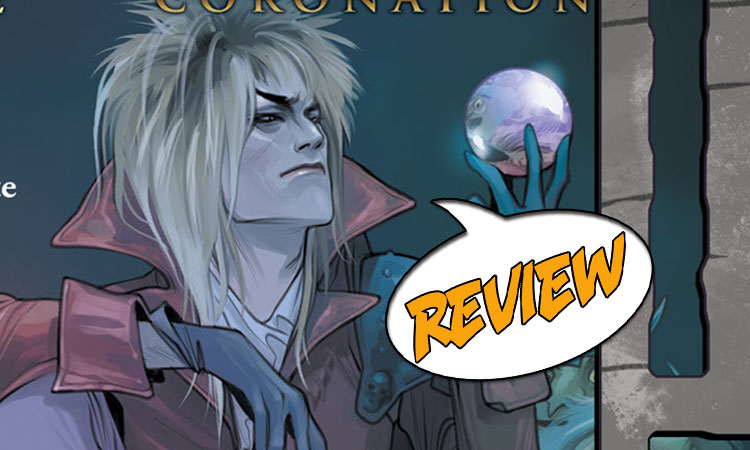 Maria did not solve the Labyrinth before the clock struck thirteen. What fate awaits her – and her baby in Jim Henson’s Labyrinth: Coronation #12 from BOOM! Studios. Previously in Jim Henson’s Labyrinth: Coronation: At long last Maria makes her way through the Labyrinth and reaches the castle. In Sarah’s timeline, we also see Beetleglum, a goblin whose job seems to be tending babies, wondering why Jareth does not keep on track with telling him Maria’s story. We also see, as the clock gets close to striking, yet more parallels with Sarah’s story. As Maria finally realizes that the Owl King actually has no power over her, the clock strikes. She is a moment too late. The Owl King captures Jareth inside a crystal bubble and orders Septimus to throw Maria back to the world she came from.

CAUGHT IN A FANTASY WORLD

We’ve known for some time that Maria is the Woman with the Unvanquished Heart, whatever that means. We find that out in Jim Henson’s Labyrinth: Coronation #12. Again, the opening is on Beetleglum sitting in the Goblin King’s throne. A white owl flies in, and it is Jareth, and he is not pleased. In telling his story, he has finally realized that Beetleglum was responsible for letting the outsiders in, for the downfall of his kingdom. But why did the goblin do it?

Beetleglum’s explanation is simple. He never found out how Maria’s story ended. Now I found this to be an interesting little twist. We haven’t yet seen how it ended. But Beetleglum was there – how does he not know? I have to admit, this piqued my interest.

Back in Maria’s story, Septimus is dragging her to the portal back to the world when she realizes that the power of her chalk was not in the chalk itself; it came from her. She attacks Septimus and gets free of him, runs over to the Owl King’s device, and starts changing it. Cible, Tangle, and Skubbin attack Septimus. The baby is saved and the Owl King vanishes. And here’s where it gets interesting. Beetleglum steps in. Maria has saved her baby and wants to go back to normal and home – but she is too late. The clock struck thirteen and now she and the baby are connected to the Labyrinth and everything around it, and this is affecting events in the real world too. Understanding this, she says good-bye and steps into the machine.

And back in the modern Labyrinth story, this is where Beetleglum wants to know what happened. Well, there were some happy endings. Cible became famous. Tangle got the hugs and affection it craved. Skubbin had further adventures. But Jareth as Goblin King arrived, fully formed and an adult. In true Labyrinth style, Jareth gives Beetleglum several possible outcomes, and then asks him what he thinks happened. Beetleglum decides it doesn’t matter. He had just tried to give him a life where he was happy or at least content.

As the story closes at the Goblin King’s ball, he informs a few of his guests that Sarah will not be joining them. And those guests are Maria, and the construct of her Albert. She has her family around her, and she is content to stay here.

This is an interesting ending. I like how it clinches the connection between the movie story and Maria’s. It’s also, in a way, a little chilling that she has decided to stay in the fantasy life that was offered to Sarah. She’s happy – but maybe her life the in the real world was so difficult that a fantasy life is better for her. And I really liked the concept that, however it ended, maybe that really doesn’t matter and it can be different things to different people.

There are some lovely moments in Jim Henson’s Labyrinth: Coronation #12, and there are also some panels that look a little rushed. This is a story that demands a wide range scenery, details, and characters, and I think that makes it extra challenging for the art.

The climactic scenes with Maria are emotional and exciting. The panels showing baby Jareth coming back and the Owl King waning are particularly nice. The Owl King’s device seems to be filled with a magic that has an almost tangible presence. And I really like the double splash showing a bunch of crystal balls floating, revealing how the real world has changed, and how Maria’s life could be if she were to return.

On the other hand, as we get toward the end, the way adult Jareth is rendered in some panels makes him look as though he is balding. There’s enough likeness to the movie character that this is rather disconcerting and momentarily pulled me out of the story.

It has been a long tale to tell, but Jim Henson’s Labyrinth: Coronation #12 winds it up in a satisfactory ending. There were times the series felt like it was just a few issues too long, and moments where the art felt somewhat rushed. Overall it had a good flavor and it introduced some distinctive, flavorful new characters. It is a fitting descendant to the original.

Some endings are happier than others, and perhaps the Labyrinth gives you the choice.