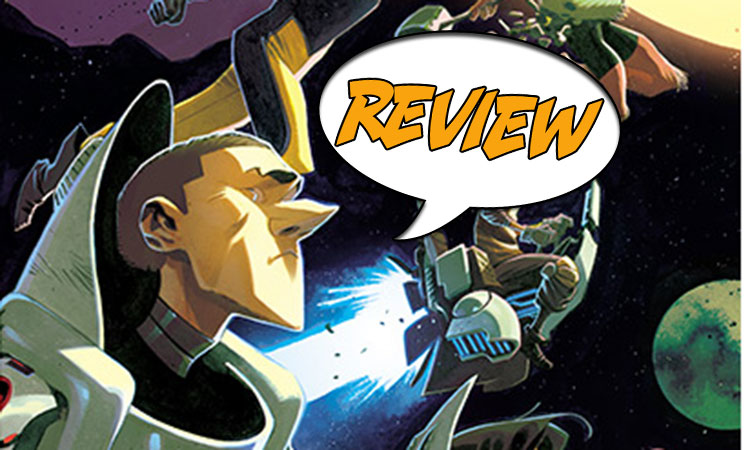 Black Science #39 spends too much of its time talking and not enough time getting ready for the finale. For all that, the art is as good as it has ever been, even if the writing is too wordy and the pace on life support. Stay tuned, though, because with this issue out of the way, the ending promises to be a winner.

Grant McKay’s hubris has killed the universe, but is there a chance his genius could resurrect it?  As the survivors of a dead multiverse gather to plot to bring everything that was lost back, will infighting thwart their desperate efforts…your Major Spoilers review of Black Science #39 awaits! Previously in Black Science:  what began as a device to travel the multiverse became a creation that brought all of existence down.  Barely saving his family and his marriage, Grant McKay’s rival Kadir hatched a plot to save reality.  Cast again into infinity, McKay and his wife improbably fought their way back to their children as reality crashed down around them.  Now reunited, McKay and his family must make one last effort to save everything they loved from final destruction!

TALK IS CHEAP.  THIS BOOK ISN’T.

$3.99 is a lot of money for a comic book.  With that sort of money, I could by myself lunch and a Coke (not a big lunch, mind).  But it would be definitely more nutritious than what has been served up in Black Science #39.

The last time I reviewed Black Science, I praised it for its inventiveness and the wonderful artwork.  The story barrelled along at a great pace, brimmed with ideas and awesome sights, and really left me looking forward to more.  It’s just a pity that ‘more’ in this case turned out to be something of a disappointment.

After all the action of the previous issue, Black Science #39 spends an inordinate amount of time doing very little.  There’s the affecting reunion of the McKay kids with their father and mother, something that feels earned after the travails of previous issues.  Once that is out of the way, interpersonal arguments become the order of the issue, with McKay and Kadir trading shots at each other, mainly over Kadir’s killing of McKay’s brother, but also the jealousy of two geniuses locking horns.

The main problem I had with the long middle stretch was that Grant McKay comes across as an entitled, whiny man-child whose hubris has unraveled all of creation, even if creation was a hologram.  There’s a deplorable lack of taking responsibility, as McKay spends more time abusing Kadir and less acknowledging his own faults.  Declaiming on his right to act as he wants to bring to mind the shameless nonsense fakers like Aleister Crowley bleated to his coven of disbelievers sixty years ago.  My genius means I can do whatever I want without consequence flies about as well fridge out of a cannon.

A party intervenes, followed by the nod and a wink of a sex scene, before Kadir and his partner are forced out of the last sanctuary in existence, and into the perilous remaining world where their continued existence can be measured in seconds.  It feels very much like Remender sees McKay as something of a Mary-Sue character, and favors McKay over the more common sense Kadir.

Artistically, Matteo Scalera delivers once again, ably helped by Moreno Dinisio’s delicate coloring.  The character design is distinctive, with the exaggerated features of each character matching the end of creation vibe Black Science #39 brings to the reader.  The detritus of creation is depicted in all its cluttered glory, with vast buildings and extravagant ruins hogging the limelight.  The art is the one bright note in an otherwise dull issue.

Black Science is undoubtedly a passion project for creator and writer Rick Remender.  From his remarks at the back of the issue, this is a series very close to his heart as a person and creative.  So I’m not going to smash it simply for being slightly sub-par.  In the grand sweep of this inventive, artistically challenging series, one issue, which serves as a placeholder for the glorious ending that is to come, doesn’t undermine the entire tapestry.  I hope that with the end in sight, Remender can return the book to its fast paced, thought provoking best.