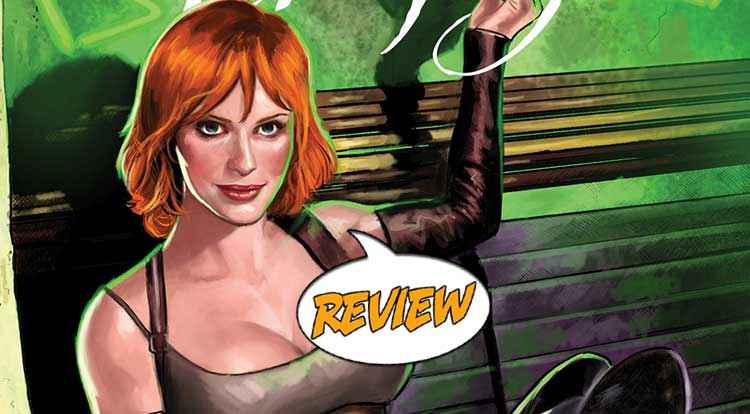 Yolanda… Saffron…  Bridget.  Whatever name you know her by, she probably stole your wallet.  Your Major Spoilers review of Firefly: Bad Company #1 awaits! Previously in Firefly:  After the Earth was used up, we found a new solar system and hundreds of new Earths were terraformed and colonized.  The central planets formed the Alliance and decided all the planets had to join under their role.  There was some disagreement on that point.  Even before the war, folks were divided into the Haves and Have-Nots.  There were only so many choice for those that found themselves living on the wrong side of the central planets, and the ones who made it had to square themselves with that.  Some made their way within the system, some made their way around it.  And some played the system against itself… unless they were lying about that, too…

We open in the past, on the moon called Ita, with the girl who would grow up to have many aliases.  Her world is lonely, dirty place, where the terraforming never quite took, where hundreds died from unclean air.  Our young “Bridget” makes a living picking pockets as she can, while her dad suffers from The Pox, a respiratory disease that makes him practically an invalid.  When she gets caught stealing once too often, she ends up taken in by the local Companion’s Guild, who bandage her wounds and let her sleep.  Sadly, while she rests, her father dies.  “Bridget” ends up living with the companions as a sort of servant girl, always in the shadow of the women training there.  Given a chance at revenge, though, she poses as a companion to murder the man whose actions led to her father’s demise, going on the run afterwards.  Cutting to the present day, we find that she’s telling her story to an Alliance bounty hunter who has finally taken her into custody, some time after her interactions with the crew and Captain of the Serenity.  She makes her escape in sneaky/murderous fashion, remembering her father’s advice never to judge until you see all the pieces put together, ending with a defiant “Be my guest.”

THAT IS ONE LOVELY COVER

I have to say, I am quite disappointed that the interiors are so very different from the beautiful cover of this issue, but that’s not necessarily saying that the interiors are badly drawn.  Mortarino does really good expressions, especially for a character who doesn’t let a lot through her facade, and his backgrounds are deep and quite well-rendered.  I also like how you can see just enough of the actress in his drawings, no matter the age, to recognize that they’re all Christina Hendricks (or close enough for likeness rights.)  The story is also interesting, giving a little bit of Freudian excuse for her terrible behavior throughout the series, but I also feel like it reveals more than I would have preferred in its world-building and back story.  Even with that concern, nothing here falls entirely flat or rings sour, and it fits in perfectly with what we already know about the world of ‘Firefly” (although, introducing ‘The Pox’ in a world where ‘The Pax’ is important does lead to some cognitive dissonance for me as a reader.

All in all, the biggest question for me is whether or not the page count justifies the increased price, and I’m still a little bit torn on that score, leaving Firefly: Bad Company #1 a little bit at a disadvantage, even with strong story and better-than-average art, earning itself 3 out of 5 stars overall.  It’s by no means a bad story (and that cover should be a poster), but I’m not sure that there’s enough metaphorical “crunch” here to make the eight-dollar price go down smoothly.

I like everything this book has to offer, but some stories are better secret, and the price is hard to overcome...