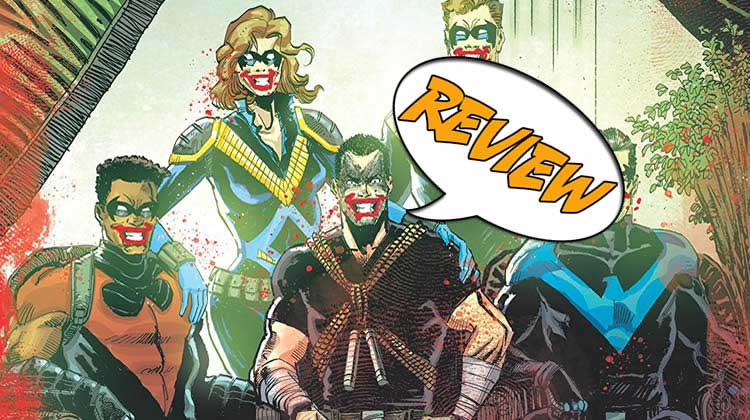 I do want to see more of the Joker’s Daughter in the future. She’s not Harley Quinn, nor should she be, but she brings her own type of insanity wherever she appears. She does help keep this comic in the Bat-Universe.

One of the best villains from the recent New 52 event was the Joker’s Daughter. She kind of disappeared when that ended and Rebirth began, so I’m glad to see her back in this issue.

She’s always one to see herself as the hero for the downtrodden even though she’s as crazy as they come. When Ric and the Nightwings have to face her, it’s a challenge worthy of the group. SOLICITATION: The Joker’s Daughter is back! Or is she? While she wasn’t shot in the head like Nightwing, Duela Dent might be facing an identity crisis even more traumatic than Ric Grayson’s. Fortunately, the new Nightwings are doing their best to protect Blüdhaven–learning as they go–allowing Ric to try to help steer Duela away from the life of a homicidal zealot of the crazy Clown Prince of Crime!

KIND OF A FEMALE JOKER

There’s a lot to like in this issue, particularly when Zack Kaplan is scripting. He’s the creator and writer for two Top Cow comics I truly enjoy—Eclipse and Port Earth. A very creative storyteller, Zack is taking this unique spin on Nightwing and making it work! (Of course, he’s fleshing out Scott Lobdell’s plot, if I read my credits correctly.)

For those who haven’t read this book in a while, Dick Grayson has become Ric Grayson after a bullet hit his head, giving him amnesia. However, he still has many of the skills he used to use, so he can still take on the baddies. A group of people rose up to take Nightwing’s place, calling themselves “Nightwings.” Ric has been in the process of joining them in order to protect his new home city.

One of the great story points of the new situation is that the Nightwings, while committed to making the city safe, are still amateurs, really. They’re learning on the job, as it were, and having Ric around has proven helpful. By the end of this issue, we find out what Ric’s intentions are as far as being a part of this team.

The Joker’s Daughter, while not often genuinely funny, is just as deadly as her namesake. She also is one to plan ahead, which makes thwarting her plans and catching her very difficult, as Ric discovers this issue. As she says in this book, “the bigger the show, the bigger the audience.”

Speaking of women in Ric’s life, we get another appearance by Barbara Gordon, this time as she’s heading to the airport. Somehow, Ric just can’t seem to leave her behind and, even though she’s heading out of town, I get the feeling we haven’t seen the last of her in this title.

I enjoy Zack’s storytelling because he always strikes the right balance of action and drama. In this issue, a councilman has explosives bound to his chest, pushing up the anxiety in most of the pages. To resolve the situation, it’s going to take Ric and the Nightwings taking on the Joker’s Daughter while they try to rescue many of the city’s upper crust.

The various Nightwings themselves are interesting, with some more experienced than others. Interestingly enough, the one I like the most is named “Zak,” much like the scripter. He’s trying to work out father issues, so we’ll see how that all resolves in the months ahead.

I particularly enjoy the action sequences in this comic. When the Joker’s Daughter appears in the middle of all the trouble, she jumps into making things tougher for the Nightwings. How like her father she is in this regard!

The fact that the various Nightwings are wearing different costumes that the hero has worn in the past helps us keep them apart, as well as the differences in their faces. Moore does a great job of helping know just who is who and what they’re up to, helping the plot move along well.

I still struggle with Dick being Ric now. I know that Dan DiDio has never been much of a Nightwing fan, wanting to keep the Bat-guys down to Batman and Robin. I’m not sure I’ll ever really get used to the whole Ric thing, but the storytelling in the past couple of issues since Zack has been scripting has made the book much more engaging.

And I do want to see more of the Joker’s Daughter in the future. She’s not Harley Quinn, nor should she be, but she brings her own type of insanity wherever she appears. She does help keep this comic in the Bat-Universe.

What the future holds for Ric and the Nightwings (sounds like an ‘80s pop band somehow) will be something I’ll be keeping track of. Keep at it, Zack—you’re making this comic a much better one!