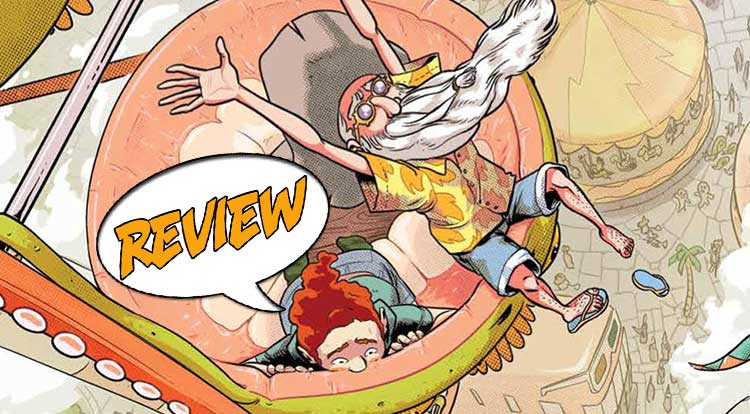 Wizard Beach #4 is not your typical fantasy book, but it is charming and thoroughly entertaining.

It is yet another beautiful day at the beach, while the northlands continue to be inundated with cold weather. Can Hexley get what he came for and learn to relax? Let’s find out in this review of Wizard Beach #4 from BOOM! Studios. Previously in Wizard Beach: Hexley Daggert Ragbottom has made his way from his frozen homeland to the beach, where his Uncle Salazar lives. He wants to learn the magic spell to get rid of the cold, icy weather back home. But at the beach, everything seems to be fun and games – the wizards act like they’re on vacation and don’t seem to take anything seriously. Worse yet, Hex is cursed and cannot leave. He gets badly sunburned. He attempts to study on his own. He meets a young lady – Agnes – and they have a fun evening along the boardwalk – until he sees Salazar change the weather. In the meantime, the wizards of Wizard Beach appear to have hatched a plot against Salazar.

DOES HEX EVEN KNOW WHAT HE REALLY WANTS?

Hex is a resourceful young man. At the outset of Wizard Beach #4, we find out he is in communication with his father through a cauldron, and that he finally has the spell that will let him end the cold weather back home. But he can’t talk long as Uncle Salazar has an armload of sand pails and shovels and is ready for another day at the beach. Hex stuffs the cauldron into a cooler and off to the beach he goes.

After some sand castle building, the yeti who is with them starts getting hungry and everyone eyes Hex’s cooler. He could not get the cauldron lit, makes an excuse for the cooler not having anything to eat, and runs off to get some food.  On his way, he figures he’s been making a good pretense at enjoying himself and tries again to leave – to no avail. Agnes spots him, and he apologizes for running out on her on their date. In an apparent non sequitur, she asks him if he likes oysters.

This is one of the things that can be charming in the writing. At Wizard Beach, the characters defy convention and the conversations seem to jump in the oddest directions. Usually there is another point to be made, although at moments I do feel like Hex, as though I missed something that everyone else has gotten. But the longer we stay here, the more I see that maybe there is a lesson to be learned. Whether Hex can see it is another matter.

Agnes hits the nail on the head. Hex has walls up around him and is utterly focused on being the one who changes the weather in the North. He isn’t even trying to give life at the beach a chance.

Back at the beach, Salazar is…well, let’s just say he’s ballooning, and he asks Hex to join him. With just a little muttering, Hex does. He gives some lip service to seeing that life can be different from his old life, and Sally releases him from the curse which is keeping him here. He blow off the beach and lands in a tower where Salazar’s friends are holding a meeting where they talk about luring him out, and how he’ll be in for a big surprise. Are they indeed up to no good? Knowing this now, will Hex leave or stay?

It seems to me that the art of Wizard Beach #4 has some roots in the style of psychedelic comics, and it totally works. There are strange and weird things around every corner, and the details are so humorous. Take the first scene on the beach – Salazar and the yeti are both building intricate sand castles, and they’re entirely different from each other. Meanwhile, Hex is making something like what you or I would probably do – heaps of wet sand shaped like upside down pails. In the background, there’s a little round hut on legs that walks by. I’d like to spend some time at this beach.

When I said Salazar and Hex went ballooning on the beach, that is true, but they make balloons of themselves. Then we get to see the beach from above – both looking over the boardwalk and looking out over the ocean. Again, the scenes are full of interesting little details. This is a book that is well worth a second read to linger over it and absorb it all. And when Hex is deflating, we get an additional little lightning tour around the area.

BOTTOM LINE: IMAGINE HAVING TO LEARN ABOUT FUN IN THE SUN

Wizard Beach #4 is not your typical fantasy book, but it is charming and thoroughly entertaining. Hex is not just the butt of all the jokes, but he still doesn’t quite fit in. Like it or not, he’s learning to loosen up just a bit. I love the world-building and how we get new and different takes on fantasy tropes. And after the winter we’ve had in the Midwest, it is a pleasure to spend some time on an idyllic beach.