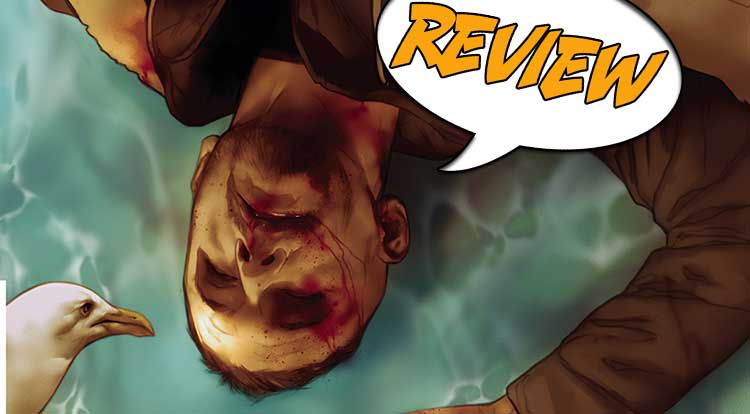 While Wynn Morgan isn’t a perfect analogue of Trump, he does feel perfectly suited to a world where Trump is President. And while American Carnage #5 isn’t a documentary, there are enough elements here to challenge the reader to not look away when confronted with the reality of America today.

Former FBI Agent Richard Wright is getting closer to finding the murderers of Agent Watson.  But the closer he gets, the further trapped he becomes.  Caught between his growing attachment to Jennifer Morgan, and loathing for her racist father, can Richard solve the crime and escape with his life…find out in our Major Spoilers review of American Carnage #5! Previously in American Carnage:  Ex FBI agent Richard Wright is tasked by his friend Agent Sheila Curry to investigate the murder of agent Watson.  Infiltrating Wynn Morgan’s white supremacist organization, Wright finds himself confronted with new iterations of the racist underbelly of America.  Beaten and shot, Wright is confronted by Morgan, whose own plans for his future are very dark indeed.

In the light of the recent massacre in Christchurch, and its white supremacist inspiration, it feels that books like American Carnage can only hope to scratch the surface of the dark, dark time confronting us.  Without sounding fancy, it is through art that most of us get to work through our understanding of events like those, to come to terms, if we can, with terrible events.  Better this, than staring at the barrel of a gun pointed straight at you.

American Carnage #5 picks up where it left off, with former FBI Agent Richard Wright wakening on a beach, not dead, as he expected, but shot with rock salt.  White supremacist Wynn Morgan is there to greet him and lay down some truths about what he perceives to be Wright’s character, and how he can help him achieve what Morgan thinks that he wants.

Writer Bryan Hill’s depiction of Wright here is a confronting study of a man using his own pain to inform his response to Morgan.  Morgan is building up a cadre of the broken and disaffected, shaping them into an organization that will provide the muscle behind his respectably patrician appearance.  Wright excoriates himself, using his own personal pain to bring power to his performance.

QUIET BEFORE THE STORM

American Carnage #5 presents as a holding pattern to the overall story.  We see conversations between various parties, helping to lay out future issues as plots are hatched and hands revealed.  Sheila Curry interviews a former business partner of Morgan’s, a man himself who is running for the US Senate.  This conversation reveals the moral bankruptcy at the heart of business and politics in America, where the ultimate goal is power, and the path paved with shattered morality, where political labels are just that, and real conviction is as substantial as a puff of wind.  Elsewhere, Wright and Jennifer Morgan have a confrontation.  We see the pulpier side here of the storytelling, where an impossible attraction briefly rises before crashing and burning.

While Bryan Hill has created a world built on the edge of Hell and populated it with the damaged and the damned, artist Leandro Fernandez has brought it to life.  His kinetic artwork brings to life Wright’s home invasion of another racist, Sheldon.  Bodies fly, angles are acute, and the violence extreme and visceral.  Elsewhere, the character work is well defined (it will take a lot to scrub your mind of the man wearing the grinning Obama mask) and there is a beautiful page of shadows and the dying light as Wright and Jennifer have their confrontation.

I can’t say you’ll feel happy, relieved or relaxed after reading American Carnage #5 – after all, the type of story you’re reading is described in the title.  It’s perfectly natural to want to escape the current plight (that’s what it feels like watching from the other side of the world) America faces today and read something, anything, that doesn’t remind you how bad things have become.

Of course, you might look at American Carnage #5 and sneer at what you see as liberal posturing.  If you do, fair enough.  But you’d be turning a deaf ear from what is essentially a cry for help.  America is burning, and American Carnage #5 is a chronicle of that inferno.  Those who stoke the fire will soon find themselves consumed with the rest of us.