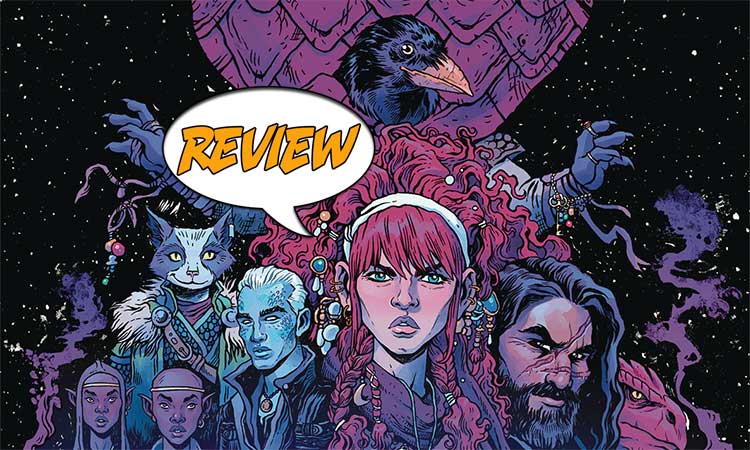 Good solid fantasy that should scratch that itch for a lot of people. I’m just not sure it is good Dungeons and Dragons.

The Moonshae Isles are under attack by the forces of evil, and only a band of experienced friends command the armies that will have a chance in defending them. But before there was bloodshed and before they were experienced warriors, they were novice adventurers, seeking glory. Find out both side of their story in DUNGEONS & DRAGONS: A DARKENED WISH #1 from IDW Publishing. Previously in DUNGEONS & DRAGONS: The Forgotten Realms have been a living, evolving campaign world for decades, and for many Dungeons and Dragons players is the only one they have ever known. It has been the scene for small intimate stories as well as major, earth-shattering epics. Now we see a tale set within the modern Forgotten Realms and it’s near past as we learn of a threat to the Moonshae Isles and the people who live there.

CRY HAVOC, AND LET SLIP THE TROGGS OF WAR…

On the shores of Alaron, on the Moonshae Isles, the dark forces of the land of Moray have landed their assault force, intent on winning the day. A diverse group of attackers comprised of humans and humanoids, possibly Ffolk, Lizardfold and even Lycanthropes surge from their boats to meet the defenders on land.  A quartet of powerful, seasoned warriors survey the battlefield from their tower and know that the situation looks grim. Xander, a scarred and battle proven warrior, Helena, who controls the elements, and Karrin and Kerrin, who hold the mysterious healing and powers and other abilities not yet revealed. The four-race down to the battlefield, and hold the line until their reinforcements arrive. But in the distance, a great disturbance signals a more powerful foe has taken the field.

How did this all start? How did these warriors find one another, and whom are they protecting the Moonshae Isle from? The answer is in the past, where a young girl, on the verge of her womanhood, makes a decision to leave her home and forge her own path.  Helena, accompanied by her lifelong friends Xander and Aiden, plan to start a new life with the White Sails Company. Along the way, they meet with the mysterious Kerrin and Karrin, as well as the dragonborn known as Royonde. More will come to hear the call of adventure by their side, as they encounter dangers they never knew within the port city of Mintarn. They are aided by a Kenku named Solivigant and make a vow to stick together and watch one another’s back. So what happened between those promising beginnings and the dark ending of this issue? You’ll have to read more to find out.

ASK ME ABOUT MY <INSERT CLASS HERE>…

B. Dave Walters does not have any prior comic scripting credits to his name, but he is the author of the book “49 Lost Secrets of Peace, Love and Money”, as well has being co-creator of the ElectroPunk online comic and hosting or participating in many popular liveplay rpg podcast and streams. He has an obvious love for roleplaying and the worlds that form the game, and his script for this issue conveys that love. That said, I do feel there are some weak points in this issue. Running two storylines simultaneously, the past and future, is hard for any comic writer. If done well it gives you a craving to find how the characters got to where they are. If done poorly, it takes away any anticipation of character growth and spoils the possible feeling of attachment that can develop. Here it seems an attempt to hook you early and then go back and discover their origins. The problem is you have put the figurative cart before the horse; the driving element of the story feels as if it should be focused differently. In this issue the first four pages are in the “present”, fifteen sequential pages in the “past” and then a single cliffhanger page returning you to the “present.” This issue is clearly meant to be about the Helena character, but feels watered down. You don’t get enough information to care about her. It isn’t clear exactly what she was running from or why her grandfather would support her decision. We are lead to believe that her abilities are beyond the norm, but what is the norm for a young girl in her situation? As a reader and gamer, I assume she is a sort of druid, but is it any different that another druid in her world at her point in life? Likewise with the Kerrin and Karrin characters. Elves? Eladrin? Fey? Are they clerics or something else? And Aiden, I understand he is supposed to be the rogue, because in one panel he attacked from behind in the shadows, but what race? Triton? Maybe hard-core gamers who play in the modern Forgotten Realms and the 5th Edition ruleset can get these references right off, but those with less experience may be left with more gaps in the story than they are willing to deal with. I think there is a compelling story here to be told, but I think it is buried under some writing techniques that are better left on the shelf. I do want to see if it turns around, as the story has potential.

The artwork by Tess Fowler (Rat Queens, Kid Lobotomy) is great. Really. She has a very organic and detail oriented style that brings these characters to life. I think her character designs go a far way for making you believe these characters could be real. Great emotional expression and details draw you in. There are some odd panel designs, and there are uses of small panels to show lots of action that may have been better executed with slash pages, but it is consistent and well done. The differences between the young versions and the veteran versions works and is what you would expect.  She too clearly loves the world she is storytelling in, and it shows in good work.

BOTTOM LINE: NOT A CRITICAL SUCCESS, BUT FAR FROM A FAIL

I’ve made no bones about the fact that I am a tabletop gamer from way back. In fact, I have dice older than a few of the people in my gaming group. When you enjoy something, you tend to set a high standard for it. Do I think there are storytelling problems in this issue? Yes. Do I think the issue is bad? No. It is however, heavy-handed in its treatment of a narrative style that works better in other forms. On a first read, I was little confused on a few points but enjoyed the overall story. ON a second read, I was more critical. It is those criticisms which give me pause. There is a lot of potential in this story, and I am willing to come back and see how the next issue fairs.

DUNGEONS & DRAGONS: A DARKENED WISH #1 has a lot of promise, but it needs to find its narrative voice to fulfill that promise.