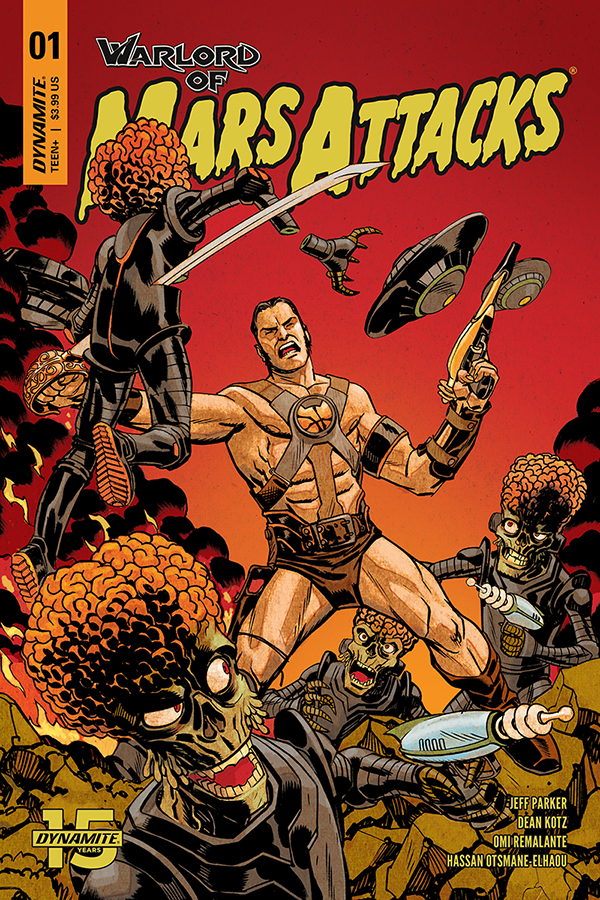 While we are keen on crossovers between Vampirella and Army of Darkness, and Barbarella and Dejah Thoris, Dynamite is really going all out on its next crossover as John Carter takes on the Martians from Mars Attacks in Warlord of Mars Attacks! Who can best defend against a Martian invasion? A fearless human hero adopted by the red planet, the one and only John Carter! After a lander disturbs the Martian surface, everyone’s favorite big-headed sadistic aliens lead a brutal invasion force toward Earth. Meanwhile on Earth, a man from 1868 Virgina comes out of stasis.

The mini-series will be written by Jeff Parker, with art by Dean Kotz.

“John Carter meeting the Mars Attacks! Martians may sound insane, but I assure you it works, because Dean Kotz is drawing the hell out of it. It’s easily the most bizarre sci-fi concept I’ve been able to do yet, and the wildest mashup yet,” said writer Jeff Parker. “And if you’re a Burroughs fan, you’ll appreciate some deep cuts that we put in.”

Artist Dean Kotz shared, “Working on my favorite Burroughs character with Jeff and Nate is a dream come true. Jeff seamlessly drops the original sci-fi swashbuckler smack dab in the middle of a retro alien invasion that spans two planets and hundreds of years. The blockbuster-scale story features so many interesting locales and characters. I never know what Jeff’s gonna throw at me next. And, thanks to those nasty Mars Attack! invaders, I get to draw A LOT of fun property damage.” Warlord of Mars Attacks #1 arrives in June 2019, and you can bet we are going to keep our eyes peeled for this release.