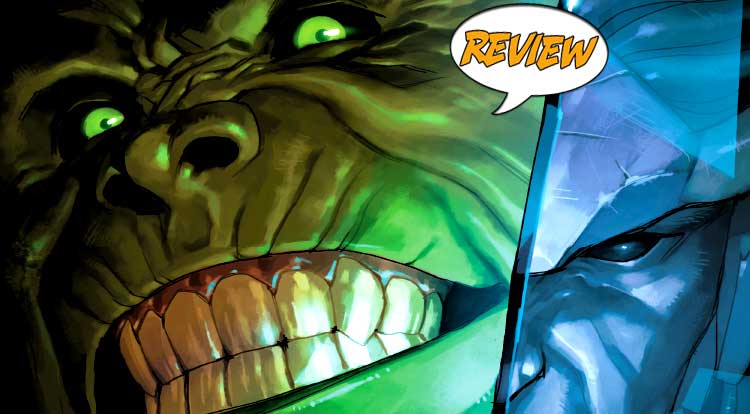 It’s monster versus living nightmare, as The Hulk takes on Hypnos in the realm of dreams.  Your Major Spoilers review of Avengers: No Road Home #5 awaits! Previously in Avengers: No Road Home:  The Grandmaster’s daughter Voyager was observing Earth from afar when she witnessed the violent return of Nyx, Goddess of Night.  Feeling responsible for her role in Nyx’s escape and subsequent slaughter of Olympus, Voyager gathered an Avengers team to stop the Queen of Night before she could reclaim the three shards of her souls that Zeus scattered, bringing about endless night.  In the Nightmare Realm, Hawkeye, Hulk and Rocket are locked in battle with Hypnos over one share, and it looks like they may be about to turn the tide.  But in Omnipotence City, the remaining Avengers are faring much worse.  Nyx’s twin children, Apate and Dolos, used their illusion powers to wreak havoc on the team long enough for Nyx to catch up, with a captive Voyager in tow…

THINGS LOOKING DARK FOR THE AVENGERS

The two teams of Avengers are in deep trouble, as Rocket and Hawkeye fend off armies of attacks, while The Hulk chases a terrified Hypnos, who has captured one of the soul-shards needed to restore his mom to power.  In Omnipotence City, a blind Scarlet Witch has a spell that would allow her to escape, if only she could SEE to draw the sigils necessary to cast it.  Teaming up with Spectrum, who transforms into neural energy, the spell is cast, but bad timing seemingly dooms them all.  The Hulk snaps Hypnos’ neck, sending Nyx into a rage and causing her to lash out and annihilate Hercules and The Vision.  Voyager teleports the Scarlet Witch away with her shard of Nyx’s soul, leaving her to face Nyx alone.  Well, not alone, but what can she and Monica Rambeau do against an enraged goddess of darkness?  As for The Scarlet Witch, she lands in a desert and is accosted by cutpurses.  Before they can take her shard and maybe kill her, she is saved… by CONAN THE BARBARIAN.

HOPE THEY DON’T IMMEDIATELY REVERSE IT ALL

Okay, maybe I should have seen that last page coming, what with the solicitations for ‘Savage Avengers’ making it clear that Conan would back in the 616 universe soon, but it was nicely handled.  The plotting of this issue raises a lot of questions, and the seeming death of the Olympian Pantheon is something that should have consequences for the Avengers going forward.  On the one hand, I don’t want to see that immediately retconned, but then again, I don’t want to see Vision and Hercules dead either.  Izaakse’s art is okay, I suppose, but I’m not overwhelmed by it, using the darkness of Nyx’s powers as an excuse for limited or no backgrounds.  The final-page shot of Conan is very well done, though, and that makes up for a lot of the problems.  With any luck, next issue will clear up some of my storyline complaints, but I have to say I miss Paco Medina.

I’m always a big fan of teams that feature lesser-known characters, so this book appeals to me, and this creative team always does interesting work.  Avengers: No Road Home #5 wasn’t quite as much fun as previous issues have been, but the art is pretty much okay and the story opens up many interesting avenues, earning a still-better-than-average 3 out of 5 stars overall.  At this point, the big question is going to be whether or not Conan overshadows this team (and whether or not any of them actually survive the miniseries.)

Some shocking moments, and even with their wins, things look bad for Earth's Mightiest Heroes. The art isn't entirely to my liking, but there's a lot of good here.