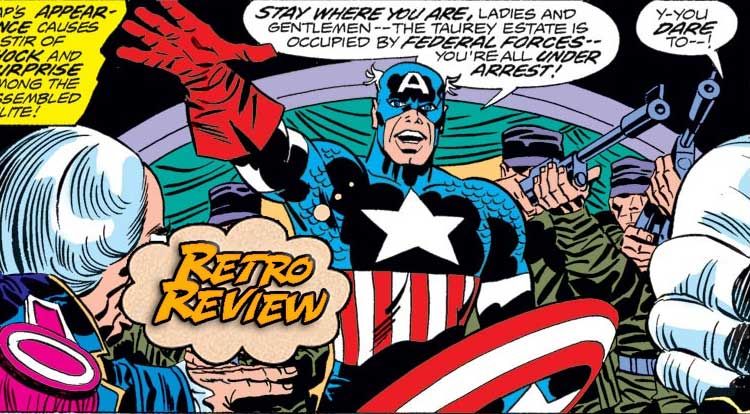 A wave of hate has swept across the United States, and only the Sentinel of Liberty can stop it!  Your Major Spoilers (Retro) Review of Captain America #200 awaits! Previously in Captain America:  After a series of attacks wherein random people turn into murderous mobs, Captain America has tracked the “madbomb” epidemic to one William Taurey, a madman who wants to return the United States to an earlier era through the use of explosives and mind-altering devices.  On the eve of the 200th anniversary of America Independence, Captain America and the Falcon are on a desperate race to stop the biggest madbomb of them all, while bringing Taurey to justice. Attacking Taurey’s estate in the hours just before dawn, Captain America and a squadron of SHIELD elite agents (some of whom are, confusingly, wearing yellow suits that resemble those of the science-types from AIM) quickly overcome Taurey’s security team, infiltrating his compound.  At the same time, in Philadelphia, The Falcon discovers the location of the last of the madbombs, the one called “Big Daddy!” That top panel of Falcon in action is an example of how much fun 70s Kirby art can be.  Though I wasn’t old enough to buy this book off the stands, my Captain America collection covers these issues, and they were kind of a shocking change from the Englehart and Isabella runs that immediately predated them.  I remember being really bugged by Kirby’s bombastic writing and art, and for that, I can only say: I was totally wrong.  When The Falcon engages the Taurey forces with a cry of “It hasn’t happened yet, you SCHEMING DUM-DUMS!”, it becomes clear that we’re dealing with next-level comics madness here.  Falcon and SHIELD make their way into the bombsite, while Captain America seeks out Taurey himself… Taurey and his loyalists (all what might be termed “one-percenters” in modern parlance) toast each other and their successful plan, even revealing Taurey’s true intentions: To avenge the loss by his distant ancestor in a duel against Steve Rogers’ distant ancestor.  Captain America takes advantage of this revelation to confront Taurey face-to-face. The tense standoff continues, and while Taurey is focused on Captain America, Falcon successfully makes a final run at “Big Daddy.”   You can almost hear the clock ticking down… It’s a satisfying ending to a story that was a bit over-the-top, even for 1976 comics.  The idea of a fascist group of rich people conspiring to take over the government through the use of “madbombs” probably seemed crazy 40 years ago, but certain elements of this issue’s story resonate differently in 2019.  All in all, Captain America #200 was ahead of its time in more ways than one, and features Kirby’s all-caps, double exclamation point style in both the plotting and the art, combining for a well-deserved 4.5 out of 5 stars overall.  If you’ve ever complained that an anniversary issue doesn’t feel like enough of a celebration for any given comic, this book might put your frustrations to rest.

This issue is a bit uncomfortable in a modern context, but it's still wild and exciting Kirby, back on the character he co-created, featuring crazy art and tense plotting. A fine anniversary celebration.