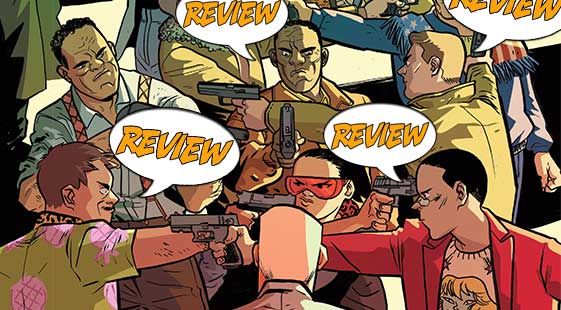 A darkly tongue-in-cheek story about the perils of assembling the world’s greatest hitmen (and women!) in one room. Fun and frivolous, Assassin Nation #1 doesn’t take itself too seriously, and neither should you. If the crazy antics of the hotheads don’t bring a smile to your face, you’d better check your pulse!

What do you do when you’re the former foremost hitman in the world now targeted for death?  Hire the best of the rest!  Settle down with Assassin Nation #1 as the accusations (and bullets) fly! Previously in the Assassin Nation #1:  Rankin, formerly the number one hitman in the world, finds himself targeted for assassination three times in the last three weeks, does he go to the police for protection?  Heck no!  He reaches out to the top twenty hit-persons in the world, an assemblage of the brutal to the outright insane and offers to hire every last one.  Do all these funsters take him up on his generous offer?  Heck no!  Before you can say I’m all out of ammo, the bullets start flying and we’re off to the races in Assassin Nation #1!

THE WAY OF THE GUN

If ever you were looking for a comic that put a fun little spin on the bloody handiwork of hired killers, then Assassin Nation #1 is the issue for you.  Creator Kyle Starks has put together an entertaining, tongue-in-cheek almost comedy of hired killers and the job they’re hired to do.

Boastful Rankin is now the head of a crime organization, though he got his start as the most lethal hitman in the world.  As we learn, his nickname was Chekhov’s Gun (because if you saw him, you knew someone was going to do), such was his fearsome ability.  But as we see in the opening pages, he’s been targeted for death – and when an ex-hitman finds himself on the opposite end of a gun, you can be sure he’ll surround himself with even more guns as protection.

Assassin Nation #1 assembles a diverse bunch of killers, puts them in a room, and lets the bullets fly.  It’s bloody, It’s ruthless and it’s pretty funny.  Kyle Starks stuffs noir-ish dialogue into the mouths of his characters, with tongue firmly in cheek.  Even the artist Erica Henderson is in on the act, as we memorably see in one panel where a goon’s head is ventilated by a bullet, with the word SCANNERS-ED appearing above the line of the bullet’s flight.  When the artist is having this much fun, you know the creative team is all in.

Don’t expect the human condition to be examined in all its banal detail – the object of Assassin Nation #1 is to present an enjoyable tale, populated by larger than life character, with a solid dose of lead poisoning on the table.  Starks helpfully presents a sort of league table at the start of the issue, ranking from 1 to 20 the top hitmen in the world, and allowing the reader to get their head around the large cast.

Helpfully, Starks gives each of the killers their time to shine, often in amusing ways.  Elderly Wistful Stan (ranking: 6 (with a bullet, no less) makes his bones by offing the elderly in their retirement homes.  Then there’s newbie Dave (that’s D. A…) who seems more intent on collecting autographs than anything else.  I’m certainly not talking deep level characterization, but coupled with Henderson’s art, there’s enough work in Assassin Nation #1 to be able to tell one character from the other.

Of course, for all swagger, these gals and guys aren’t particularly bright.  You don’t have to do too much thinking when the answer to every question is a bullet.  So it’s no surprise that halfway through Assassin Nation #1, the bullets do start flying.  While the artwork and action is dizzying and fast-paced, the real utility of the kill off is to reduce the cast to a manageable size.  One gets the sense that Starks is going for an And Then There Were None vibe to future issues, as the noose tightens around Rankin’s neck.

There’s a lot to like about Assassin Nation #1.  It’s fast-paced and breezy atmosphere makes the issue appealing, to the point where the constant killing isn’t as off-putting as you think it should be.  Rankin’s arrogance and cocksure attitude is a hoot, with his constant declaiming about how badass he was in the old days a source of endless amusement.  If you stop and think about it for a moment, the whole things falls apart (and is pretty tasteless) but such is the pacing of it, Starks never gives you a chance to do anything but keep flipping the pages.  Assassin Nation #1 is a lot of fun, and holds the promise of even more mayhem to come.