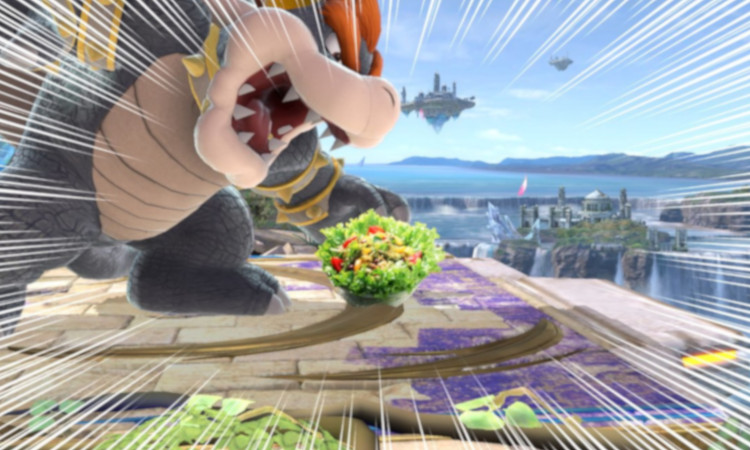 Mario: You always have a balanced plate. It doesn’t have to be in a healthy way, even if you’re snacking your ratio of chips to dip is perfect.

Donkey Kong: You genuinely like healthy food, You’ve caught yourself talking at length about salad.

Link: You eat whatever your significant other is into, you dated that guy who was all super Atkins and you ate nothing but ham for six months. Dark Link: Same as Link but way more hardcore. If your girlfriend is a vegetarian you become a militant vegan.

Samus: If you don’t like it, you’re not eating it. Period. You’d rather starve.

Dark Samus: If you don’t like it you make sure all your friends try it so that you can all suffer together.

Yoshi: When you go out to eat with friends you’re the one who asks “Are you going to finish that?”

Kirby: When you go out to eat with friends you’re the one who doesn’t ask “Are you going to finish that?” You just grab stuff from other people’s plates. You animal!

Fox: You make sure everyone sees you putting hot sauce on whatever you’re eating. If you catch someone’s gaze you let them know this sauce isn’t even the spiciest you’ve had.

Pikachu: You keep a jar of candy at your desk at work for anyone who wants some, you eat 50% of any given jar.

Luigi: Everyone at your local sandwich shop knows you by name. You want to eat other places, but you don’t because you don’t want to let them down.

Ness: You will try to have a pizza delivered wherever you are, even at public parks or airports.

Captain Falcon: One time you told someone that you kinda liked chicken caesar wraps and now people believe that they are your favorite. Sometimes they will just bring those to you unprompted if they go out to lunch.

Jigglypuff: Whatever’s close to the bar, or better yet, whatever they happen to have at the bar.

Daisy: You order a giant burger and a diet coke.

Bowser: You always have the biggest burger, the spiciest curry and the tallest beer. You don’t care if anyone else sees you destroy a porterhouse steak, but if they do you appreciate their gasps of awe.

Ice Climbers: You order two entrees and split them with your significant other.

Sheik: You love many exotic dishes cooked in traditional ways (as opposed to restaurant fare) but you never talk about it because it makes you sound like a snob.

Dr. Mario: You have a significant eating restriction, celiac disease, lactose intolerance or god forbid a serious food allergy. However, you do not let it define you, instead you approach a healthy, fulfilling diet as a problem to be solved.

Pichu: You will look at a menu for hours before making up your mind. Even then, you will often regret not ordering something else. Falco: You make sure everyone sees you putting hot sauce on whatever you’re eating. If you catch someone’s gaze you let them know this sauce isn’t even the spiciest you’ve had. Then you have serious heartburn all night.

Marth: You get kinda mad when someone orders the same thing as you.

Ganondorf: You have very, very strong opinions about pizza.

Mewtwo: Sometimes you’re so focused you forget to eat.

Roy: You have extreme brand loyalty, you can tell when someone slips you McCormick mayonnaise instead of Hellmann’s.

Chrom: Your family recipes are sacred to you.

Mr. Game & Watch: You’re that person that will take a bite out of a piece of writing chalk to show that it’s perfectly edible.

Meta Knight: You eat well and exercise, but are still kinda chunky. You need to realize that you are valuable as a person, regardless of how much you weigh. All your friends agree, we’re all rooting for you!

Pit: You read somewhere that milk isn’t as good for you as people say it is so you don’t drink milk anymore.

Dark Pit: You read somewhere that the government puts chemicals in the water to mind control the population so now you only drink kahlua.

Zero Suit Samus: There is a part of your body that you think looks really good. You go out of your way to show that off. What does that have to do with food? Check out these biceps, that’s what.

Wario: One time a co-worker saw you eating cheetos and told you not to eat those because they’re bad for you… so you slashed his tires.

Snake: Even as a kid you’ve always eaten like an old man. It’s all soup and hard candy for you.

Ike: The guy at the coffee shop thinks you’re cool and is convinced that you’re really interested in coffee and will talk your ear off and ask for your opinions. You came in to use the bathroom.

Diddy Kong: you say “five second rule” more than you care to admit.

Lucas: You keep walking by that Pupusas place, looking longingly through the window, chickening out and eating at Panera. (If you’re actually a Salvadorian Lucas main, reverse the restaurants)

Sonic: It doesn’t matter where you eat or what you make, it ends up on Instagram before it goes in your mouth.

King Dedede: You’ll eat anything as long as someone else is buying.

Olimar: Whenever given an option between two dishes you answer “Whatever’s easiest.”

Alph: Whenever given an option between two dishes you stare off quietly and hope someone else chooses for you.

Lucario: You actually like the taste of coffee (or earl grey or a similar drink), whenever you see someone adding cream or sugar it makes you a little mad.

R.O.B: You start a story, take a big bite, then hold up your finger for everyone to wait until you’re done chewing.

Toon Link: Last night you had a giant bowl of fruity pebbles for dinner and binged an anime no one’s ever heard of.

Wolf: You make sure everyone sees you putting hot sauce on whatever you’re eating. If you catch someone’s gaze you let them know this sauce isn’t even the spiciest you’ve had. Then you produce your own super spicy hot sauce and force everyone at the table to try it.

Villager: Food cannot fill the endless void that is your soul.

Mega Man: As soon as you eat something you like you immediately look up the recipe and try to reproduce it yourself. It works about 50% of the time.

Wii Fit Trainer: You know a lot about a particular subset of food; gluten-free, tacos, BBQ, smoothies, or what have you. Your friends know to come to you for recipes, restaurants where they actually get it right, and places to avoid.

Rosalina & Luma: You always make way too much food and will bring it to work or school for everyone to share.

Greninja: You’re the person that figures out the bill and does not let anyone leave until everyone has chipped in what they owe.

Mii Brawler: You’re kind of a food poser, you’ve never actually had a banh mi, but you talk about them a lot. (If you’re a vietnamese Mii Brawler main substitute banh mi with chilaquiles.)

Mii Gunner: You like almost no food. Sometimes you bring an egg salad sandwich with you to restaurants because you know you’re not going to like anything.

Palutena: You sneak a full-sized chocolate bar every once in a while, you work hard, you deserve it.

Pac-Man: You will eat most of the watermelon AND win the seed-spitting contest.

Boy Robin: You were late for work so you grabbed whatever was handy, which in this case was a slice of wheat bread, a ring pop and flat Dr. Pepper that’s been in your car since Wednesday.

Girl Robin: You were late for work so you covered by stopping to pick up two dozen donuts for the office and then were like “Oof, sorry I’m late, the line at the donut place was suuuuuuper long!”

Shulk: You always walk into a restaurant determined to have something new, but you end up eating the same thing. It’s good! Don’t beat yourself up over it.

Koopalings: You go to a restaurant and ask for a coke, the waiter says “pepsi ok?” you answer…
Bowser Jr.: “No, what’s wrong with you, bring me a Dr. Pepper.”
Larry: “Are you asking me?”
Morton: “FINE!”
Wendy: “If it still has rum in it.”
Iggy: “Wait, now I have to switch my whole order.”
Roy: *walks out*
Lemmy: “I’ll just drink this.” *reaches for the ketchup*
Ludwig: *double finger guns* “Actually I’ll take your number instead.”

Duck Hunt: You and your significant other went on a double date with Ice Climbers main and they wanted you to order four things and split it four ways. Um, no. You ordered this chicken carbonara and you’re going to eat aaaaaaalllllll of it.

Ryu: You are willing to drive two hours for the best sandwich in the city.

Ken: You are willing to wait four hours for Ryu main to bring you back the best sandwich in the city.

Cloud: You know what drink pairs with everything. You will physically fight anyone who disagrees with you.

Corrinn: You love fusion cuisine so much that you can’t eat at single-ethnicity restaurants anymore.

Bayonetta: You bought whipped cream and chocolate sauce to use in the bedroom, but then you realized you had ice cream in the freezer so you made a sundae instead.

Inkling: You are kind of into gross food like pickled eggs and sardines, not together of course… although…

Ridley: You eat when you’re angry, which is most of the time.

Simon: You always have to make sure everyone else is fed before you can eat.

Richter: You always have to make sure Simon main sits down and eats, otherwise they’ll pass out.

King K. Rool: You were the kid who would mix ketchup, orange juice, and chunks of cheese pizza in a milk carton at school and then dare other kids to eat it.

Isabelle: You keep your lunch in a tupperware container clearly labeled with your name, but Villager main keeps eating it.

Incineroar: Whatever you’re eating it’s GOOD AND STINKY, it’s going to smell up the whole office when you put it in the microwave.

Piranha Plant: You are constantly eating, if your blood sugar drops below a certain point everyone’s having a bad day. Joker: You are going to be late for dinner.

And that is it! Eerie how all of this is so accurate right? Well, if you’d like to know more about the highly scientific process I used, or if you feel that I didn’t correlate your character and your diet correctly, fell free to leave a comment below.