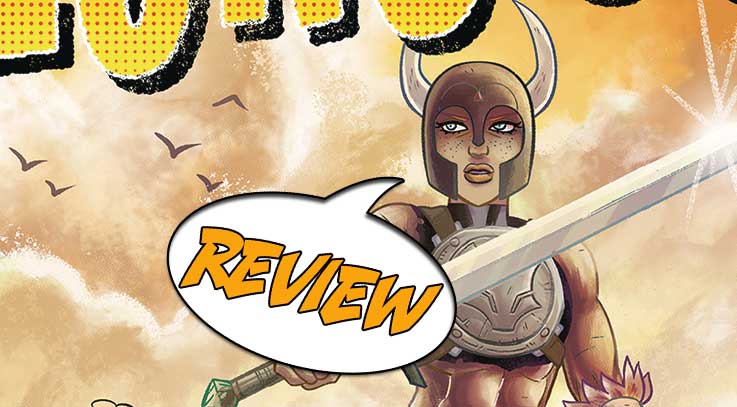 There’s always something new around the corner at The Long Con, and sometimes it’s even terrifying.

In the Con that outlasts all the other cons, deep and meaningful questions are asked, such as who would win in a fight – Skylarks or Battlefoxes? Previously in The Long Con: Dez and Victor make it through Capetown and reach the office of Helvetica Caslon. Before she became the editor-in-chief of Zenyth Comics, she was one of the writers of Skylarks. She is intrigued by Victor’s story that the world outside the Con has not ended, and we get his flashback to the event – the calls from his boss, the bombs falling, and his getting knocked out and driven away. Helvetica does not want to bother with trying to get to the outside world, but she lets them in on her knowledge that something is going on in Hall F, and it may involve the Special Guest, and she wants Victor and Dez to go in to investigate, disguised as prisoners.

IF YOU THOUGHT THINGS COULDN’T GET WEIRDER

The Long Con #7 opens with a brilliant understatement, as Victor says, “Well, that was unexpected,” surrounded by the bodies of several Skylarks. In a book where the unexpected is, frankly, what I should be expecting by now, this is not what I expected. I really identify with Victor sometimes.

Helvetica had just handed Victor and Dez, with Flix for good measure, off to the Skylarks who grimly march them up to a checkpoint. Victor and Dez have a fiercely whispered argument as to whether they were betrayed, or this is part of the plan. And then several Skylarks are hit with arrows as the Battlefoxes show up. After quite a fight, the Battlefoxes win and Dez finds Loren among them, looting the bodies. “Loren,” she says, “we have a specific performance improvement plan about this.” I love gems like this – treating the utterly ridiculous as though it were absolutely mundane, and phrased in such a way that makes you wonder what has happened that this was actually a thing.

One of the Battlefoxes greets them – it’s Megyn! (Who, you may remember, was a Star Hussar cosplayer five years ago.) So what happened? Why is she now a Battlefox? It goes back to the early days after the event, when the Special Guest started to consolidate power, and purge the parts of Skylarks that he felt were not in canon. That included the Star Hussars, who found not only a hidden vendor stash of Battlefox stuff that gave them purpose, but a videotape of a Skylarks/Battlefoxes crossover event.

A flashback to that event leads to a discussion between the women about how they’ve been treated. As it turns out, babes and non-babes alike had to deal with things like being quizzed (and called out) on the tiniest details, and having their asses grabbed. I hear you, ladies. Well, it’s all well and good that they’re on the same team now…

When an alarm goes off, and Loren tackles Victor through a blast door that opens only briefly. The heroes are separated, but there is another way through the Great Panel Divide. What follows is a series of one to two-panel gags which just get progressively goofier, until Victor and Loren meet up with Dez and Flix again among a bunch of cultists at the doors to Hollywoodland.

THIS IS A REALLY BIG CON

There is a lot of humor in The Long Con #7, and a goodly portion of it is visual. From so many of the characters, we get the blending of the intensity of their current situation mixed with moments when they are so much the con attendees of five years ago.

The fight scenes are terrific. The Battlefoxes are really cool. They’re a terrifically diverse mix of women and fighting styles. The panels use some interesting diagonal shapes, and the action is so big it sometimes overflows the borders. It’s dynamic. The lettering is fun, and there are plenty of sound effects.

But honestly, where the art really shines is going through the panels that are still going on at the Con. From the Flix Bixby Fan Club meet up through Women Wyverns in Comics, there is such delightful goofiness. And if you’ve ever been to any kind of Con, they have the added bonus of almost being plausible.  I laughed, and I kept going back through those pages.

BOTTOM LINE: IF YOU’RE IN, YOU CAN’T LEAVE NOW

Granted, it might be kind of confusing to jump into The Long Con #7 without having read earlier issues, but honestly, as long as you know something about Cons, it’s still a lot of fun. This book pokes fun at everything and dares you to keep up.