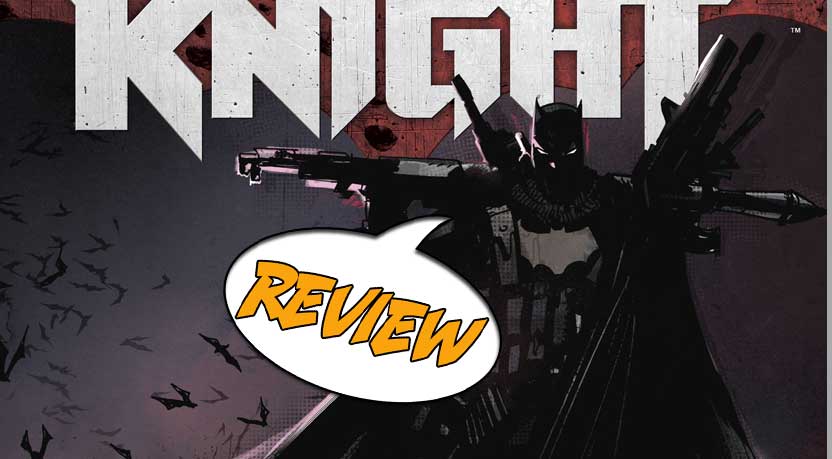 the origin story of the Grim Knight, the world’s most dangerous vigilante!  Read with awe how one small change creates a cascade effect that shakes the very foundations of an alternate Gotham City in this powerhouse issue! Previously in the Grim Knight: From the pages of The Batman Who Laughs comes this ripping origin story of the Grim Knight, born of a strange twist of fate in an alternate Gotham City.  Having infiltrated ‘our’ Gotham City, the Grim Knight abducts Jim Gordon, promising to take him to meet his greatest foe.  Along the way, we find out how the Grim Knight came to be, and the terrible threat to Earth he and his crazed master promise…

THIS AINT YOUR 60s TV BATMAN!

If you’re a big fan of fantasy writing like me, you’ve had to come to terms in recent years to the rise of ‘grimdark’ fantasy, where no horror is too great to inflict on the characters populating books by authors like GRR Martin or Joe Abercrombie.  Though, like this book, the grimdark phenomenon really dates back to the 80s, where works by Stephen Donaldson with his deeply conflicted lead character Thomas Covenant, were matched by graphic novels like The Dark Knight Returns.

The Grim Knight really feels like DC Comics answer to the Punisher.  The look and feel of the Grim Knight echo that of Frank Castle – the heavily muscled body, and the resort to guns to remedy all problems.  However, while Castle’s war on crime is effectively a war of vengeance, the Grim Knight’s efforts are designed to impose order on the chaos that led to the death of his parents.

There are those who decry this sort of storytelling – the nihilism, the bleakness, the resort to violence as the only answer to seemingly intractable law and order problems.  And they’re right – the fantasy that is exposed in works like The Grim Knight #1 could never work in the real world – which is why they’re a fantasy.  Happily, the power fantasy inside this issue could never work in a world where the laws of man dominate – however frustrated we may feel at the slow turn of the wheel of justice, at least that is better than taking up arms and killing those we believe deserve it.  Admittedly, there’s a catharsis in seeing how this alternate Bruce Wayne – a man who never foreswore the use of arms in his pursuit of justice – terminally deals with the criminals and lunatics of his Gotham City.  Thankfully, it is a catharsis that resides only in the pages of this issue.

THE ART OF VIOLENCE

This well-paced issue alternates between the ‘birth’ of the Grim Knight, and his rise to dominance, with his efforts in ‘our’ Earth’s Gotham City to demonstrate to Jim Gordon that he was his greatest foe in that alternate Earth.  If the cliffhanger, which promises more from the Batman Who Laughs, is a touch perfunctory, the true enjoyment from this origin story is how one tiny difference can have such a huge impact.

Tynion and Snyder show with chilling effect how far a Batman with no limits can go.  How the World’s Greatest Detective, armed with an arsenal and technology paid for by the bottomless well that is Wayne Enterprises, and no moral qualms, can overwhelm the criminal class, and impose an essentially fascist regime dedicated to order.  The most chilling moment is where, after the Grim Knight has gunned down a mugger in front of their child, the father tells the boy to smile, as the Batman is always watching.

Eduardo Risso’s art is to die for.  Thanks to colorist Dave Stewart, there’s a painterly quality to the art that is riveting from panel to panel.  Shadows and silhouettes dominate in this issue, as can be seen where the Grim Knight overcomes Gordon’s men in a powerful scene.  There’s also a brutal vitality to everything that happens in The Grim Knight #1, which matches the instinct to mete out unrelenting violence in the face of a terrible personal tragedy.

For the Grim Knight, the end justifies the means.  Brutal violence is the only answer to a scarifying childhood moment that found its answer in the barrel of a gun.  This is a powerful story that many would shy away from; but nonetheless, present a compelling story about a character who seeks surcease in the destruction of others.

The Grim Knight #1 is a power fantasy for all of us who revel in its masculine identity. It’s also a story that lays out in brutal detail that while our Batman operates outside the strictures of the law, it is those laws that keeps monsters like the Grim Knight from imposing their twisted morals and values over the rest of us.