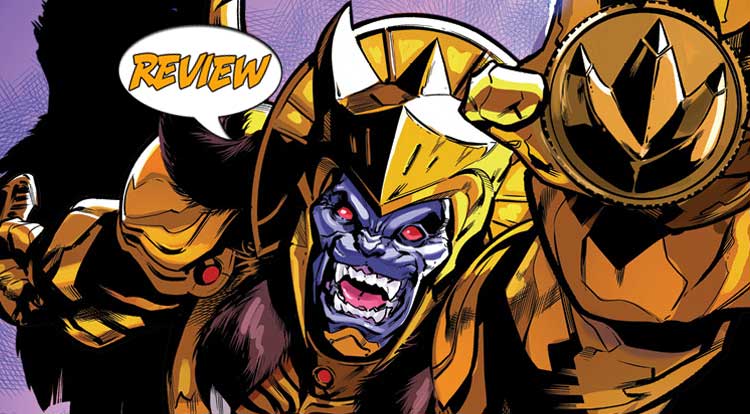 Who can out-Rita Rita Repulsa?  How about her MOM?  Your Major Spoilers review of Go Go Power Rangers #18 awaits! Previously in Go Go Power Rangers: Alpha One’s backstory is revealed!  Meanwhile, Rita and her mother reconnect after all these years…  will this be the key to powering the Dragon Coin?

We open with another flashback to the world of 10,000+ years ago, as Zordon laments the endless war against the forces of Master Vile. He worries that his failures will bring down the entire universe, but his King argues that the battle is still ongoing. (Knowing that the fight is still going on eons later kind of gives Zordon’s side more credence, but that’s with the perspective of the readers.) In order to help turn the tide, Lexian has a gift for his vizier: He has commissioned his most skilled craftsmen to forge a perfect defender, a warrior/confidante/advisor, eve a protector. An Alpha. In the present, the five Power Rangers have met Alpha-1, and with his advice, easily take down one of Rita’s monsters in the natural history museum. Still, they’re uneasy that this new ally has been watching them from afar and when Trini tries to raise her concerns, she is shut down by Jason, leading her to feel betrayed by her sorta/kinda secret boyfriend. Elsewhere in the universe, Rita Repulsa has raised a pan-dimensional corporeal echo (read: ghost) of her late mother in the hopes of manipulating “Mom” to unlock the power of the Dragon Coin…

DIGGING THE BACK STORY FOR RITA AND ZORDON

It’s really impressive to see the amount of emotion that Parrott is able to imbue into these characters. Seeing Zordon (often a cardboard “Good Guy” with no development or emotions of his own) consumed with regret is truly touching, but the sadness in Rita’s eyes as she meets her dead mother makes me empathize with the wild-eyed, cackling Witch Bandora. That’s a tough row to hoe, but it works beautifully, thanks to subtle dialogue and Carlini’s expressive art. The story behind Alpha-1 is also well-handled, but I especially like how he immediately helps forge the team into a more cohesive fighting force, but somehow they still don’t trust him. The design of A-1’s face gives him the technological equivalent of R. Lee Ermey’s drill sergeant face, even when he’s saying things that should be comforting, and even Alpha-5 seems to find him creepy, which adds to the tension of what his endgame actually is.

With long-lost secret back story for Zordon *and* for Rita, the Green Ranger story waiting in the wings and things getting weird after secret kissing, Go Go Power Rangers #18 is ratcheting up the drama on all fronts and doing so with some lovely, quirky art that conveys tons of emotion in every face, earning 4 out of 5 stars overall. Given the sudden last-page surprise, I’m looking forward to more of the original Rangers and their supporting cast.

The drama between the episodes of Season One, including back story for Zordon and an emotional reunion for the *villain*. Good stuff...