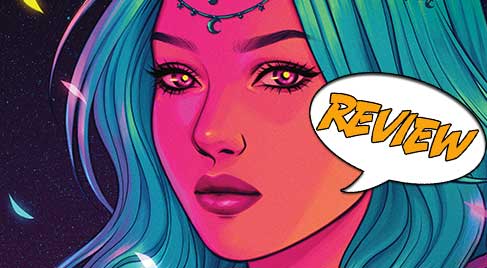 What cabal will Nina choose, and what really happened to her in the earthquake ten years ago? Previously in Blackbird: Nina’s mother Gloria is not dead; she is alive – and is a Paragon. Nina runs from her, angry and feeling betrayed. Then she finds out that her sister, whom she thought was taken away, is also a Paragon. Nina gets even angrier and feels she has no one to trust, when Clint shows up and tells her the truth, that a Paragon initiation requires that the die for that magical power. Nina also agrees to go with Clint and talk to his father, Carter. He tells her Gloria wanted them to use spells on her to make her forget, but he’s giving her the option to become a Paragon, if Sharpie the Cat approves. Sharpie has been cursed. Clint lifts the curse, and Sharpie reveals that Nina’s life is a lie, and that she died in the earthquake ten years ago.

A MOTHER’S LOVE – PROTECTION OR CONSTRAINT?

Now that Nina knows the truth, she intends to confront her mother in Blackbird #6. She wants to hear it firsthand. Iridium Castle, in the hills, looks intimidating. Clint says he has something that will help, and takes her into a liquor store. She adamantly refuses liquid courage, but that’s not Clint’s intent. He built a little hidden place in the store. (The owner, Mr. Sunny, was getting robbed all the time. Using his magic, Clint made a spell generator that makes robbers think they pulled their gun and robbed the place, but they don’t. I think that’s an elegant use of his magic besides being a way to show us more about him as a character.) Clint has big dreams of using magic to help tackle the root causes for people’s desperation, which is a noble and laudable idea. Zon Cabal does not agree, and he hopes that maybe Nina can help him.

But first she has to see her mother. In parting, Clint gives her a gem for a truth spell. And Nina crosses the border, and is dumped at Gloria’s feet. The argument is made flashier and more grandiose with the use of magic, but it is a classic one. Nina feels that all she ever wanted was a mother, and Gloria left her, and left the family to fall apart. Gloria feels that she’s sacrificed everything to protect Nina and to give her a normal life. (At this point, that seems arguable, but she sticks to it.) Gloria tries to make Nina forget, and fails, and Nina casts the truth spell.

On the night of the earthquake, Nina died. Gloria sees the cat, Sharpie, nearby and tells him to call. He magically calls out, and two older Paragons appear – Gloria’s parents. Gloria had left the Cabal – becoming what is called a Blackbird – but with the death of her daughter, she gets drawn back in, asking her parents to initiate Nina to bring her back to life. But she wasn’t ready for it, so it was not a full initiation. She has power, but no control, and Gloria says she must never become a Paragon. This makes no sense to Nina, and we get only the slightest hint of something sinister. Gloria’s parents murdered someone. And there’s talk of the high price to pay to become a Paragon. And there’s the hint that Marisa may somehow be paying the price for saving Nina.

At this point, Gloria boots Nina back out of her territory. Nina talks briefly with the two spirits that Paragons call upon – the Jackal and the Beacon, one dark and one light, and in short order, she becomes a Paragon of Zon Cabal, determined to find her own way and to make her life better. While this is the end of this arc, we are left with the question of what the consequences will be of this decision.

The story is interesting. At the start, we saw a lot about Nina’s troubles with her family, almost too much. And they seemed very much like growing up in a family that becomes dysfunctional. It seemed at first that the discovery of Paragons would vindicate Nina’s crazy fantasies. Instead, it showed the deeper, hidden divide that was growing within the family.

The art of Blackbird #6 continues to be gorgeous. The linework is lovely. The fashions are distinctive and interesting. From small character moments to large splashes, this book is a treat for the eyes.

One scene I particularly like is when Nina is dropped unceremoniously into Gloria’s presence. Gloria’s color scheme is red, gold, and white, and she’s standing in front of a throne/sofa which is also red and gold, almost organically part of the surroundings by virtue of blending in with a bunch of curving, organic lines. Behind that and wrapping himself around as though he’s guarding her, even though he’s dozing, is the great beast.

I like the take on Gloria’s parents. They’re both decidedly older, gray-haired even, but they’re still stylish. And that style is more mature, although it is just as distinctive as that of the younger characters.

BOTTOM LINE: AND WILL THE TRUTH SET YOU FREE?

Blackbird #6 comes to a satisfactory close that still leaves some questions unanswered, some problems unresolved. The family drama has higher stakes than we supposed at first, and Nina has grown strong enough in herself to make choices and stick with them.