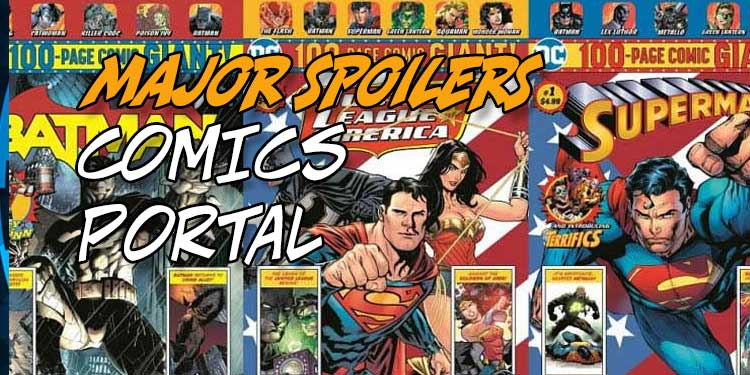 COMICS PORTAL: From Walmart to Your LCS!

If you’ve been enjoying the DC 100-Page Giants found at Walmart like I have, you’ve also had some troubles finding every issue!

Well, those days may be over as DC appears to be getting ready to make those Giants available in your local comics shop as well! It’s been several months now that DC has been making these Giants appear in local Walmarts, and apparently they’re selling well.

Recently, DC made a new Flash Giant and a new Swamp Thing Giant available. I’ve also found that I need to get to my local stores very close to the day the books are released, or I may not find them.

Commenting on this, DC Co-Publisher Dan DiDio said the following on his personal Facebook page recently:

“Successful and continuing. For those fans of the DC Giants at Walmart, have to clear up some misinformation making the rounds. Just want to let you know these books are doing well, so well that we are looking to expand the number of original pages in each book and include distribution to the direct market. Look for these and new titles later this year. The promise is to keep it one of the best values and reading experiences in the market. Best, DD”

Of course, I have to wonder if the books coming to our LCS will have the reprinted parts included or not. I’ve often bought those stories before, so it would diminish my interest if I still have to pay nearly $5.00 for these Giants. At Walmart, it’s different because of their availability. For now, they’re collectible because you can’t get them anywhere else! The goal of this series sure seems to be attracting new readers, so the reprinted parts help new folks catch up on stories they likely haven’t read before.

Then, too, with some of the books coming to an end, such as Sideways, other heroes will likely have to take their place.

Buying these books at Walmart is often a solitary experience for me. I’m the only one rummaging through the box while I’m there. Granted, I’m not there terribly long since the dynamics at Walmart are very different from my LCS, where discussion is more open and welcome. I grab what I am looking for at the big store, then worry about keeping them in good condition once I head to the check-out counter.

This does make me wonder how many new readers are being attracted to DC comics as a result of the Giants. Or are the other people buying them comics fans like I am? I doubt there’s a way to tell!

Still, if the sales are good, that’s a plus. I puzzle over just how releasing the Giants in local LCS’s will impact Walmart. If the sales go down at the big guy, they might tell DC to stop that practice! Another aspect of this story recently took place when scripter Tom King talked about the lead story he’s writing for the Superman anthology.

“My goal in doing the Superman Walmart book is to put new customers into comic shops. You like this Superman, go check out this Batman,” King tweeted. “Why exclusive then? That was the price we had to pay to get this opportunity. I don’t like it, but I think it’s worth it.”

It’s always important to remember that this is “show BUSINESS,” and everyone is trying to leverage interaction with everyone else to benefit themselves. That’s just how it works.

Walmart sells these Giants to make money, plain and simple. If that helps attract people who currently aren’t reading DC comics to a local shop, that’s good for the industry. Everyone wins!

Of course, another related story has to do with DC selling a specific line of toys and an annual to Target.

That 100-page Giant focused on the Funko DC Primal Age set of action figures. They came out in mid-January and, based on how I couldn’t find any in local Targets, they sold very well!

Every opportunity a comics company takes to get the word out to local shoppers, some of whom are likely at least familiar with superheroes and the like, is worth the gamble, in my opinion. I wouldn’t mind seeing more of this kind of thing taking place, honestly. And it doesn’t matter which company we’re discussing here!

I mean, there are many stores that cater to women these days. What if those Wonder Woman Giants were available in some of them? It would depend on just who the clientele is, but if it reached a broad spectrum of girls and women, I’d at least like to see DC explore it!

There are kids’ barbers in some shopping malls I’ve seen. I wonder what it would take to get Teen Titans or Batman for sale in there.

Anyway, I’m hopeful this trend will prosper and continue to be valuable to Walmart and Target, at least. If we can get more eyes on comics, I just know that some people will be drawn strongly enough to them to peek inside, maybe even buy a few. After that, who knows?

What do you think? Does the Walmart or Target models work in your neighborhood? Have you bought some of the Giants, if not all? Do you want to see more or less? Whatever your opinions, be sure to share them in the space below!