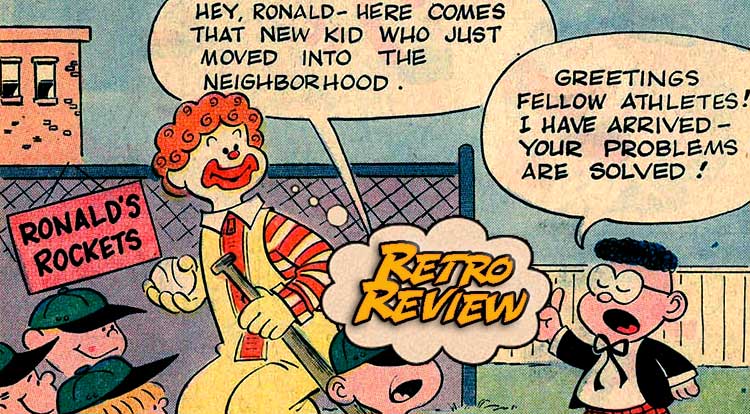 Why number three?  Because I don’t own a copy of number one!  Your Major Spoilers (Retro) Review of Ronald McDonald #3 awaits! Previously in Ronald McDonald:  The story of the most beloved clown in the fast-food world begins in 1963, with Willard Scott, of all people.  A radio personality at the time, Willard portrayed the hamburger-happy clown in a series of television ads.  There are differing reports of who actually created the character (naturally, Mickey D’s doesn’t agree with Willard’s assessment that it was all his idea), but once the clown was up and running, he did not stop.  Initially a strange-trash golem in face-paint, today’s Ronald is portrayed by an army of performers who are trained with identical physical mannerisms, but back in the 1970s, licensing and likeness issues weren’t quite the science that they are today.

And so, this happened: No, Faithful Spoilerites, you’re not crazy.  This whole issue is done in a fascinating not-quite-Charles Schultz style, with Ronald himself resembling a grown-up Linus in face makeup.  The stories a mostly two to five-page comedy skits (the haunted house tale ends with him scared because he caught a view of himself in a mirror) including an appearance of a very familiar-looking puppy who reappears later in the book, when Ronald agrees to help his unnamed young friends make a movie. The black-and-white beagle was the dead giveaway that made me wonder if this was actually a reworked ‘Peanuts’ comic, especially given that we’re never actually given names for the random gang of kids.  Are they actually the Peanuts gang with the serial numbers filed off?  (A quick check of the Comics Database reveals collections of Schultz strips throughout the 1970s, but I can’t find any evidence of a Charlton adaptation of the Peanuts.)  The gags here are pretty much the standard Charlton gag-strip stuff, though there are a couple that did get a little giggle, like the two-pager about a costume party. There’s also a clever bit where Ronald and the kids help out their local grocery store owner compete with their corporate competitor’s skywriting outfit, leading the clown hero to save the day with his ingenuity. I’m a big fan of the old “funnybook” collections of gag strips, and it’s always kind of disappointing to see how little attention the old Dell, Charlton and Pines comics are.  Books like ‘Dennis The Menace’ and the various Looney Tunes and Disney stories were a HUGE part of comic history, and the loss of those silly entertainments is actually one of the most damaging steps from the millions of comic books sold in the past to today’s rather anemic direct market.  The very fact that this book might have, indeed COULD have starred Gool Ol’ Charlie Brown or Daffy Duck or Abbot & Costello is a large part of the charm of it all, and eve though Bill Yates (and his writer, assuming that he had one) were working in a Schultz-inspired style with shopworn plots, I really enjoyed reading this book. First of all, that’s a really scary Ronald.

Second of all, I’m almost certain that’s actually Victor Garber as Jesus from ‘Godspell’, which would make Yates pretty presceient, as the off-Broadway opening would be until later in the Spring of ’71.  That combination of cute story, fascinating art and Future Vision leave Ronald McDonald #3 with a bemused, terrified but entertained 3 out of 5 stars overall.

Not for nothing was "a big stack of vaguely related funnybooks" one of the biggest eBay sellers of my comic retailing days, and this comic is a perfect example of why. It's pretty clever, the art is fun in puzzling ways and I enjoyed reading it.

Now, can I find a copy of Number One?