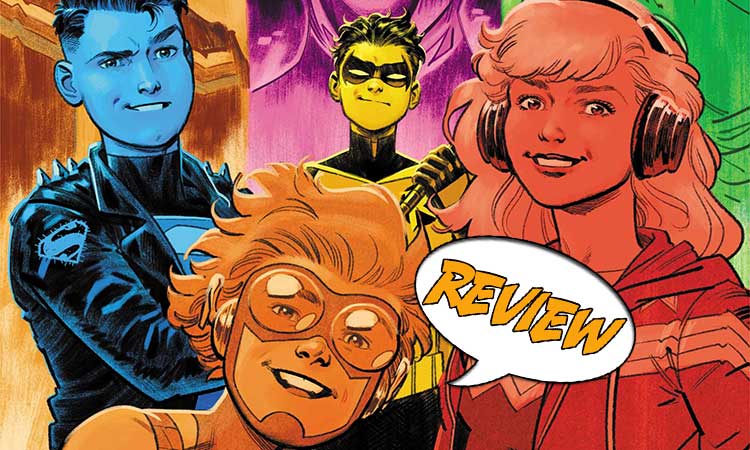 Bart Allen finds himself on Gemworld with no one else around him, until he runs into Conner Kent! But what is he doing here? Previously in Young Justice: All is not well in Gemworld. Lord Opal is currently in power, and he hints that he would reward someone well if they would dispose of Princess Amethyst. She comes crashing into his castle accompanied by Robin. The rest of the team also were pulled into Gemworld. Jinny, Teen Lantern, and Wonder Girl find themselves together. In short order, they run into Robin and Amethyst. Their meeting doesn’t last long, as Lord Opal shows up and claims they’re all in his custody now.

Young Justice #3 begins with the enthusiastic reunion of Bart Allen and Conner Kent. Imagine being transported to an alien world, and the first person you meet is an old and dear friend you thought was gone. Then Conner asks Bart how he got here. He, in turn, asks, “Where is here?” He, too, is on Gemworld, and Conner apparently lives here, farming the land. And he loves it. That’s about all they have time for before one of Lord Opal’s men, Carnelian, shows up to apprehend Bart, accusing him of trespassing. Living up to the Impulse name, he, in turn, accuses Carnelian and his men of invading Earth – and places him under arrest. This continues for a few more delightful panels as Carnelian explains a bit more of what’s going on and Bart prepares for what he thinks is going to be his and Conner’s fight against him. Instead, Superboy stands down and Bart is apprehended.

In this issue, we have a flashback of Conner. How did he get to where he is now? Well, one day he was fighting a monster above a secret S.T.A.R. Labs complex. He wonders what the monster was. The S.T.A.R Labs people want to know who he is and what he’s doing there. It’s national security versus basically a teenager. He leaves, and we see him next in high school, where Conner is part of a discussion about rules – why do we have them, and why do people follow them? There isn’t time to go very deeply into this, but it is a discussion that is not only interesting, but it fits the plot. But it gets him thinking, and he decides there are more important things that he could do besides attending school. He returns to the lab complex, where they chide him to follow the rules and move along. Long story short, he doesn’t; he breaks in to see what they’re up to, and he ends up transported to Gemworld.

Bart’s reaction to Conner, who is still wearing his Superboy shirt, draws attention to him and his shirt. Carnelian starts asking him more questions. And then his wife shows up, with their infant son (who is adorable).

Meanwhile, Cassie, Robin, Amethyst, Jinny, and Teen Lantern find themselves in the prison pits of Castle Opal. Each is in their own oubliette, although they can talk to each other. And apparently Cassie feels it’s her fault – she lost her head in the fight and, well, here they are. Not only that, but there is some kind of enchantment which causes some befuddlement. But this is where we learn that reality is falling apart, and the only person who knows or could do something in Amethyst. Who is stuck in an oubliette.

GORGEOUS AND FUN TO LOOK AT

I love the art of Young Justice #3.  We get young people who look and act like young people, taken maybe a touch over the top for humorous effect, it works. This is used to great effect between Bart and Conner. Impulse runs the whole gamut of emotions in rapid succession (naturally), and his bravado is delightfully cheeky. It makes him all the more astonished when Conner doesn’t fall in with his crazy plan.

I think the scenes of Conner prior to arriving in Gemworld are also lovely, and it sets up a callback to Cassie’s solo bit last issue. I like this take on the rebellious teenager. Not only does it have some logic behind it, but the connection that S.T.A.R. Labs was involved with something from Gemworld ties his presence in neatly. And the scenes of his travel to and arrival on Gemworld are super pretty to look at.

For as dark and dank as the prison pits are, there is still humor to be found.  I appreciate this, as someone who has a tendency to find things funny when I can. With some well-placed speech styles in the lettering, and slightly different oubliette openings, we can clearly tell everyone apart. And I do think this was an amusing way to do it.