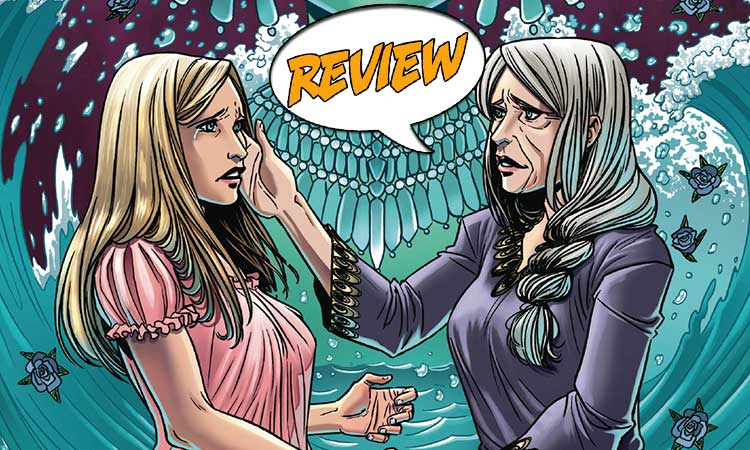 The Girl in the Bay #2 Review

Life, death, and reality meet each other head-on as Kathy Sartori tries to figure out why she is here and what’s going on. Previously in The Girl in the Bay: We meet Kathy Sartori, a young woman living her life in 1969, as she recounts her death. She died that year, one night when she went out, drinking, doing drugs, and meeting a man who seemed interested in her. She may have been expecting sex, but what she got was murdered, and dumped in the bay. But then she wakes up and finds her way back home, although everything in the city looks strange. Her family is gone, and the neighbor, suddenly much older, informs her that they moved. Kathy is stunned to learn that it is 2019. She goes to her family’s house, only to meet…herself, but fifty years older.

SOMETHING REALLY ODD IS GOING ON

As The Girl in the Bay #2 opens, we see an old man sitting on a bench, talking to someone, perturbed. The reveal is soon enough – he’s talking to someone unearthly, who may be there or who may be only in his mind. That’s one of the fascinating things about this book. Whatever is going on is strange indeed. Is it real? Is it a depiction of madness? Is it the experiences produced by the last neurons firing in a dying brain? Is it all just a nightmare? To make matters even more convoluted, Kathy, who is also our narrator, tells us that the guy on the bench is Hugh, the guy who killed her. And that she’s killed him.

This is a trippy book. This isn’t exactly time travel, and it isn’t exactly a parallel universe. It does play off the concept of what if someone had multiple versions of their life. Kathy fainted last issue, and comes to on a sofa in…her house, that is, the house of the Kathy who lived through the past fifty years. She does not tell the older woman who she is, and has a momentary vision of her with a decaying face and body. She runs off, and her older self calls after her by name. And we see that the bench Hugh was sitting on in the opening pages is just across the street from the house.

Kathy makes her way back into the city. She doesn’t know where to go. She doesn’t have anyone she can turn to. She can barely adjust to the culture shock of how things have changed. But she finds money in her pocket, and a current driver’s license, and a credit card. Convenient, but weird. She gets a hotel room, sleeps for a bit, and then is overwhelmed by current television.

She goes out and wanders into the West Village, where she sees the ghost of Winston Burton, a singer who was hugely popular back in the 1960’s. Not only can she see him, she can touch him, and when she does so, she experiences his entire life. It turns out that he, as a spirit, is trapped there by the enduring idolization of his fans. Now that’s an interesting concept for a ghost, and it’s also terrifically sad. But with Kathy’s touch, he is finally able to move beyond the place where he died, and he goes with her.

That night, Hugh kills the older Kathy. She sees this on the news the next day, and goes to the funeral. When she touches the corpse of her other self, in a flash she experiences her entire life – which she never lived. She faints again, and comes to with the older Kathy’s family. But in seeing that life, she saw the man who killed Kathy, and she’s pretty sure it’s the man who killed her.

The art of The Girl in the Bay #2 is also fascinating. There are characters who appear both in their young version, and in an older version – fifty years later. They are recognizable as the same people.

But the first surprise of the book is the creature who is talking to Hugh. It is a monstrous form that was clearly human, malformed, almost dripping, and with altogether way too many teeth. It is horrifying. It also bears a hint of resemblance to Hugh. It is real? Is this a hallucination? It is just giving life to something that internal to Hugh? This is a book that asks you to believe some incredible things, but doesn’t give away whether what you are believing is real in this world or not.

As awful as some of the scenes are, there are some that are incredibly beautiful. The Kathy who lived was apparently an artist. Her house is full of paintings many of which, if I recall correctly, are of her sister who disappeared. Not only is she portrayed as some sort of fantastical person, but the same woman also appears in young Kathy’s memories of her death. She also appears in Kathy’s dreams when she finally falls asleep, looking like the painting she lives in has come to life around her. And later on, we see her looking after Kathy and Winston. Is she real? Is she another spirit manifested by people who will not let her memory go?

BOTTOM LINE: AN INTERESTING TWIST ON A MURDER MYSTERY

The Girl in the Bay #2 fascinates me. We really don’t know much about our main character. She was a rebellious young lady, but at this point, she’s mainly rather shell-shocked and almost as confused as the rest of us. At its heart, this looks like it could be an interesting story. I only hope that the two remaining issues provide enough room to resolve everything in a way that lives up to the premise.

At its heart, this looks like it could be an interesting story. I only hope that the two remaining issues provide enough room to resolve everything in a way that lives up to the premise.