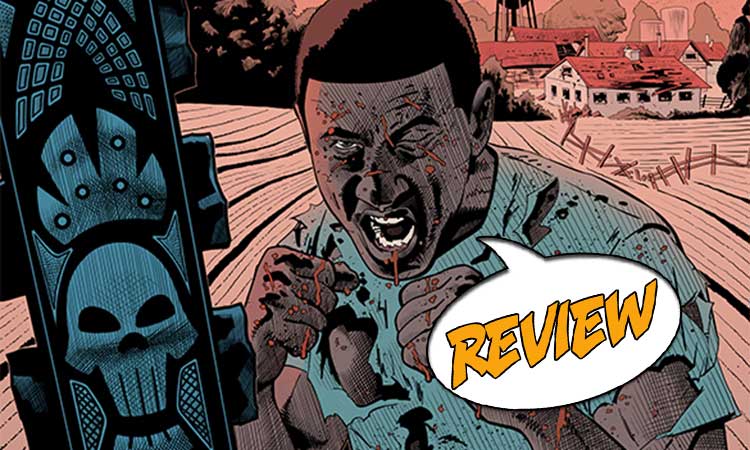 A compelling tale grounded in on the corner in the here and now, and in the other with an otherworldly story that has a savage, bizarre grace to it.

Ever wanted to read a book that examines the intricacies of the intersection of the US/Mexican border while an alien pops out of a boy’s chest?  Your Major Spoilers review of Gasolina #16 is here! Previously in Gasolina:  the politics of the US/Mexican border have played out with predictable results in that the strong exploit the weak and the desperate for profit and perversity.  Police procedural meets supernatural menace as a little boy named Quique finds an insectile creature sprouting from his chest.  With the police closing in and Randy striving to find the kids he promised to save, the hunt begins in Gasolina #16.

On the other side of the border, in Mexico, Randy is searching for a little girl, Graci, and a young boy Quique.  The boy isn’t all he seems; in fact, he’s something far darker and more horrifying.  Jumping between two periods of time, in the past, Randy promises to find the children.  While in the present, Randy has been captured and all hope of recovery seems lost.

Meanwhile, a crazed criminal warlord finds and frees Quique.  Obsessed with a demon goddess named La Querida, the warlord sees Quique as being similar to her, and strives to spread the word that something holy has arrived on Earth.

Gasolina #16 is a strange mix of the mundane and the insane.  Criminal gangs trafficking people across the border provides the grit of the storyline.  Tales of human misery, of people being transported for profit, are the backbone of this story.  Criminals take on the police and bloodbaths abound.  Tied into the story is Randy’s search for the two children, one of whom is host to a bizarre and sickening alien/insect creature that lashes out at those who would hurt the boy.

Writer Sean Mackiewicz is in sufficient control of the story that he strikes a balance between the mundane and the bizarre.  The human trafficking is depicted in all its miserable glory, men and women separated from one another and transported back and forth over the border.  The authorities are next to useless, always one step behind and last to the bloodbath that ends the issue.  On the flipside, there’s something truly eerie about the creature hiding in Quique’s chest, a creature able to lash out and kill in spectacular fashion when the boy is threatened.  Couple that with the warlord who’s got religion thanks to La Querida.

In fact, it’s the warlord storyline that provides the most compelling element of Gasolina #16.  Surrounding himself with demon masked guards wielding Aztec inspired weaponry, he runs a stadium where men kill each other for sport.  He presents as kindly to Quique, who he frees from captivity, but his obsession with La Querida (who appears in all her monstrous glory in a wonderful panel by Nico Walter) promises a bloody future for all he comes into contact with.  Set against the police procedural aspects of the story, it’s a compellingly odd sidestep.

The artwork in Gasolina #16 is grounded and impeccable.  There’s nothing exaggerated about the human characters, which helps make their actions simultaneously more human and bizarre.  Excellent use of panels helps drive the issue forward.  Artist Niko Walter isn’t afraid to wield a bloody brush, as we see in key moments when La Querida appears, and victims start dying in torn heaps.  Mat Lopes coloring is also a treat – given the story, he makes great use of blood red, with some of the key pages dripping with it.  But his browns and ochre color mark the story throughout, as do the long, menacing shadows that predominate in a world that appears to be always approaching sunset.

Gasolina #16 is not an issue to immediately jump into if you expect to pick up what’s going on in the series.  It assumes the reader has been with the series since the first issue.  That said, there’s enough in the general story to bring the casual reader up to speed as to what has happened recently in the story arc, so from that perspective Sean Mackiewicz hasn’t completely closed the series off to new readers.  And more than that, Gasolina #16 drips with atmosphere and the promise of an apocalyptic finish.