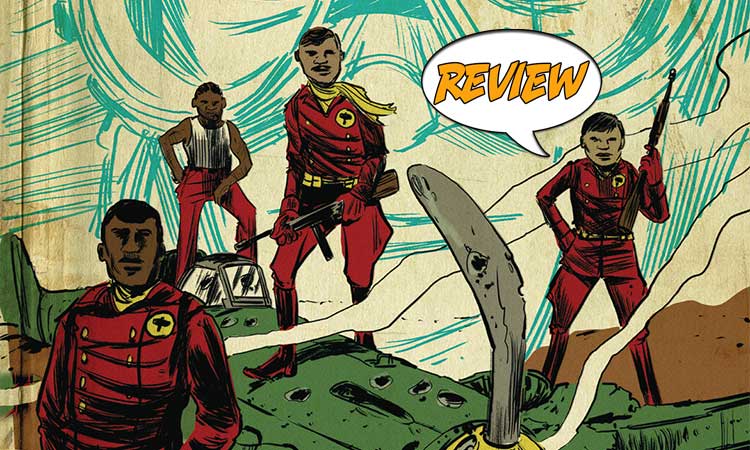 For fans of the Black Hammer titles, this is a treat. If you don’t know those stories, don’t let that stop you from picking it up.

In the waning days of World War II, Hammer Hawthorne and his famous Black Hammer Squadron are assigned a final mission, one in which Hawthorne will not only be racing against the Soviet forces known as Red Tide, but see the return of his most hated foe, the Ghost Hunter. But is the mission all it seems to be? Take a step into the past of the Black Hammer universe in Black Hammer ’45 #1 from Dark Horse Comics. Previously in BLACK HAMMER ‘45: Set within the Black Hammer Universe, as conceived by Jeff Lemire, BLACK HAMMER ’45 goes back to the time of World War II and tells the story of the Black Hammer Squadron, led by Hammer Hawthorne, during the last years of the war. On their final mission, something happens which continues to haunt the survivors of that mission…

An aged Hammer Hawthrone tools around his small apartment, caring for his beloved plants and listening to jazz music on a beloved, if scratched, original record. He looks at the photos that adorn his walls and sees old friends and acquaintances surround him as well as milestones of a life lived in service to his country. Much like the days gone by while he was in command of the Black Hammer Squadron, today he has a mission.  First, he remembers those days of flying and bullets and bravery, of sacrifice and bravado, of the days leading up to his final mission.

The Black Hammer Squadron was the best of the best. They accomplished missions that saved lives and did it with little fanfare. The newsreels did not think that your average Mr. and Mrs. Joe America would celebrate the accomplishments of an all minority squadron, but the Black Hammer Squad’s achievements eventually became so great no one could ignore them, and the people celebrated. They took the fight to the Nazi menace, be it alone or beside the super-powered heroes of the day. They sacrificed their own, but they always did their job and they never gave up.  Then they were given what would be their final mission of the war. It was a black book mission, no records being kept, and no glory to be gained. The Nazi were holding a family, a family so intelligent they could possibly sway the war, if their Nazi captors could break them. It was a rescue mission. Rescue them from the Nazis who held them, and from the incoming Red Tide who were advancing on them. Run of the mill of the boys in Black Hammer, until Major Thompson announced that the enemy ace pilot known as The Ghost Hunter would most likely be there as well. Ghost Hunter had taken down some of those closest to Hammer Hawthorne, and Hawthrone intended to get his revenge.

In future, Hammer Hawthorne is an old man, but he and his fellow veteran Lin still have a mission to accomplish. You see, it is the tenth, and they have a standing date to attend. What is the connection with that mission so long ago, and what happened which resulted in the current state of affairs?

THEY JUST FADE AWAY…

Black Hammer ’45 takes place in the Black Hammer Universe from Dark Horse Comics. To be honest, I have no history with those titles, and have no real point of reference with these characters or their current standing within that world of stories. I was drawn to this title due to its World War II setting and the homage the main characters paid to a favorite World War II fighter squadron from a competing company.

The beauty of this issue is I feel I need no frame of reference to the Black Hammer world. Jeff Lemire (Sweet Tooth, Black Hammer) has woven a story that needs little to no prior knowledge to enjoy. Yes, this is an action-packed issue in the vein of Captain Midnight, Blackhawk, and Airboy, but it is also a story which shows how much can change. The elder Hammer Hawthrone is a man with regrets who lives surrounded by memories of past glories. Something happened to him that he cannot forget, and his devotion toward honoring that past shows how it affected him. Yes, there are some exciting action sequence. There is a lot of in era dialogue that reads, accordingly, as if World War II era films inspired it. There are hints of the issues minority servicemen would have been faced with in that era, and there is some appropriately mysterious stage setting for future issues. As much as that story is of interest, and it is greatly interesting, it is the story of an old man who wants to honor the past that speaks to me.

The artwork provided by Ray Fawkes (Batman Eternal, Constantine) is shockingly effective. His use of watercolors changes the tone of the story, giving it a dreamlike read, like a rapidly fading memory. He appears to use a heavy grade cold press paper, and you can see the textures of it on the printed page. There are many quiet moments in this book, and Fawkes art makes them beautifully deafening.

BOTTOM LINE: CINEMATIC, IT WILL SUCK YOU IN…

Again, I did not have any connection with this book prior to reading it, it just looked like a genre I enjoy and had a compelling cover. I am glad I picked it up. Lemire and Fawkes did a really good job on keeping the story moving and making sure the feeling of weight and importance was kept at the appropriate levels. There is world building on a wonderfully detailed scale at work here, and I ardently look forward to the next issue.

BLACK HAMMER ’45 #1 is a sky-soaring issue that holds such beauty that you will possibly start looking for a box of tissues.