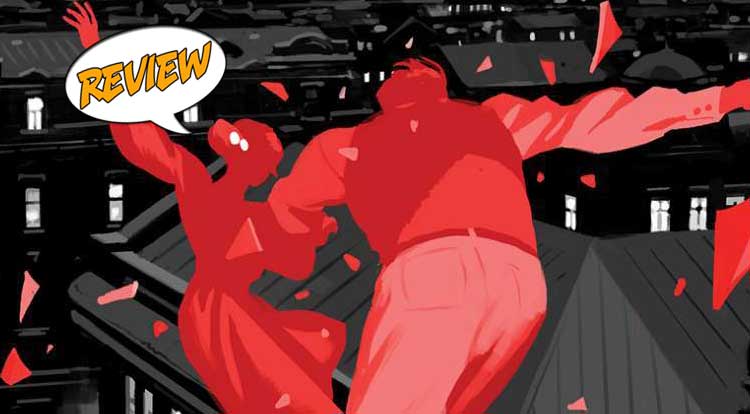 Old-fashioned spycraft meets even older-fashioned magic, but can even that synthesis stand against The Crimson Lotus and her mystical prowess?  Your Major Spoilers review of Crimson Lotus #4 awaits! Previously in Crimson Lotus: A run-in with the Crimson Lotus leads one agent to realize they’re being kept in the dark by the other, while the question of what the Lotus is after looms larger than ever.

MAGIC COMBINES WITH MUSCLE AND STEEL

In a hotel in China, Agent Shangli prepares to check out, leaving her erstwhile partner Dai Jieh behind and terminating their difficult team-up once and for all.  That is, until the desk clerk remarks about “his guest” keeping him company.  Shangli races up the stairs just in time to find Dai being mystically tortured by Crimson Lotus herself.  With a little magic of her own (and a throwing star into the skull of Lotus’ trained sniper monkey, and yes you read that right), the duo manages to escape, barely.  And with a few broken ribs to boot.  Shangli moves on to her next meet, only to find that Dai tailed her there.  They travel into the mountains of China to find a hidden city, with a mystic temple that contains a particular idol.  They argue the entire time, including about the meaning of the idol (a piece of literal Hell itself, which has a little more heft in a story that takes place in the same world as Hellboy), until the statue begins to bleed and hordes more monkeys leap from the rafters.

The first thing I noticed about this comic is how delicate and rounded the visuals are.  Like most of the books set in the Mignolaverse, it has a lot in common with Mike’s art (deep blacks, extensive use of shadows, a stylized take on facial expressions) but Shangli’s features especially show a much more measured use of inks and a much more rounded line.  There’s also more color here, with vivid greens and bright gold tones to denote the use of magic, and it’s a really attractive package and creative touches like a monkey with a gun make it memorable.  I’m still pretty fuzzy on what Crimson Lotus is doing, who she is or what her plan entails, but the fun interplay between our spy leads makes it fun to read.  (There’s also very little of the ol’ slap-slap-kiss routine, which might feel a little played out.)

There’s a lot of fun spycraft stuff in here, combined with the magical craziness that you’d expect from a Hellboy comic, but Crimson Lotus #4 defines itself among it’s peers with attractive, colorful art and lot of fun dialogue, even if the main premise is a little bit wobbly, earning 4 out of 5 stars overall.  I tend to run hot-and-cold on most ‘Hellboy’ comics, but this issue’s amalgam of the spy and magical genres (with two Asian leads, no less) lands squarely on the “hot” side.

I'm a little vague on the details, but it's charismatic, well-drawn and fast-moving. All in all, it's a good book.