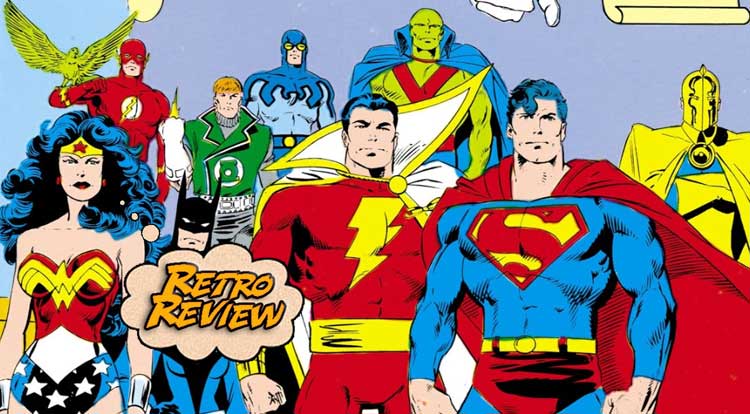 Retro The Crisis On Infinite Earths reconfigured the entire DC Universe and brought all the various characters together on one Earth.  But…  what then?  Your Major Spoilers (Retro) Review of Legends #6 awaits! Previously in Legends:  Darkseid, the ancient Lord of Apokalips and The Phantom Stranger, a mysterious…  phantom… stranger have made a wager.  Big D believes that he can undermine the heroes of Earth by sowing discontent and distrust, making even Superman quit the caping business.  Having sent his herald Glorious Godfrey to Earth and using his hypnotic powers, Darkseid has caused the public to turn against the heroes, even bringing about the end of the Justice League of America and causing a crowd to beat Robin nearly to death.  Now, his final gambit begins. And, to be honest, things ARE looking dire for the heroes of the DCU.  The Justice League has splintered and fallen apart, including the horrific deaths of Steel and Vibe, “new” hero Captain Marvel has given up his costume after a tragic death-which-isn’t-actually-a-death-at-all, and the people of Washington DC have turned out in force to finally run the heroes out of town.  They’ve assembled with torched and pitchforks and picket signs at the Lincoln Memorial, where Doctor Fate has assembled his champions for a final stand (with the sudden addition of The Martian Manhunter, who goes where he is needed, summons or no summons.)  The assembled heroes, including Green Lantern Guy Gardner, the Blue Beetle and Black Canary, fight off Godfrey’s warhounds successfully, but then the second wave attack begins. Say what you want about John Byrne (and, honestly, the man has given any detractors plenty of ammunition), the layouts in this issue are wildly creative and give new life to characters who had been a bit stale throughout the 80s.  The use of the new Black Canary suit is pretty amusing to me, especially since Byrne clearly had no idea how to make it work, but his Batman is all shadows and whooshy cape.  And you can see why they chose him to reboot Superman on the visual level.  As the heroes leap into action, Doctor Fate is surprised and overwhelmed by the attacking crowds, who actually manage to knock the helmet of Nabu off his head, forcing Kent Nelson to flee or be trampled.  Godfrey manages to disappear as well, running into Captain Boomerang of the newly-formed Suicide Squad. With his plans imploding all around him and the threat of Darkseid punishiment weighing hard on his mind, Godfrey hopes that his armies of Warhounds and Parademons will be enough.

The newest hero in town arrives just in time to prove that they absolutely are not. Among the really weird decisions made in the wake of Crisis, the decision to reboot Wonder Woman as brand-new to Man’s World is one that sort of works, and this “first appearance” fifty years after her first appearance is a pretty amazing debut panel, reminding us again why ’87 Byrne was the Gold Standard of pencillers.  (His only real competition at the time would have been George Perez, who was the mind behind the rebooted Wonder Woman in the first place.  Some might say Frank Miller, but his “ink with a sledgehammer phase” was well under way by this time.)  The heroes fight through the Apokaliptian hordes, with Superman and Captain Marvel smashing legion after legion of Parademons, The Martian Manhunter saving the POTUS from an alien death squad, The Flash and Changeling working crowd control with Batman and Black Canary.  Even Robin gets into the act, bringing a horde of children who still have faith in their heroes before Glorious Godfrey has the worst idea of his life. Doctor Fate reclaims his helmet, Glorious Godfrey is reduced to a gibbering mess and the mind-controlled hordes suddenly return to their senses, leaving the heroes to realize that they worked quite well together.  When Doctor Fate asks them to become a full-time team, nearly everyone says a hearty yes (Changeling is still an active Titan, Superman says he’ll be there when they need him and Wonder Woman fades out before anyone notices.)  It’s Blue Beetle who suggest that they call themselves The Justice League, in honor J’Onn’s fallen teammates, ending the cosmic chess game and sending the Phantom Stranger into full-on Rod Serling mode, ruminating about the need for and the role of heroes.  Legends #1 is one of those “reset the game board” stories, most of which don’t really age well out of their own time, but the combination of  Wein’s tight plotting, Byrne in his prime and Ostrander’s dialogue make for a book that still works, earning 3.5 out of 5 stars overall.  This book is really the first chapter of the post-Crisis DCU, and the fact that so much of it is still relevant to the DCU twenty years later is both cool and a little sad.

It's very 1987, to the point where J'Onn J'Onzz saves a President,who is explicitly Reagan, but it's still a good story out of its context.