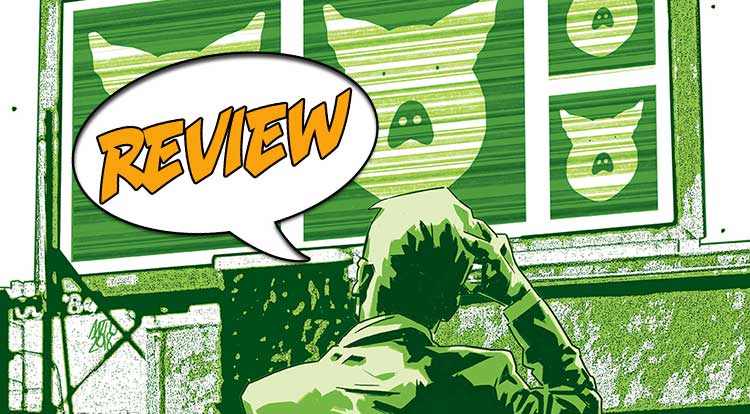 Lots of fun elements that never really cohere, saved for the most part by excellent artwork and some very dark humor.

When a Prime Minister goes rogue and refuses to see reason, there’s only one man who can provide a terminal solution – Pitor Wyrd!  Wyrd #2 features a main story and several backups that take us into the warped world of the man they call when every other solution fails.  Along with dealing with a Prime Minister with a fondness for bacon, Wyrd #2 goes back in time, then forward to a horrifying future for Wyrd.  With a storyline plundered from other places, Wyrd #2 will take you deep into the crazy adventures of Britain’s last resort in times of crisis! Previously in Wyrd: After the event in Crimea, dealing with a super-soldier program gone awry, everything resets and Wyrd #2 opens with the titular hero contracted to take out the UK Prime Minister.  Blending the action thriller with the occult, this issue takes an even darker look at Wyrd, and the lengths he is prepared to go to get his man.  The backup issues take a similarly darker tone, with the last few pages drawn in the style of an LSD fuelled nightmare.

Not too many years ago, the very first episode of the television (and now streaming) series of Black Mirror dealt with a UK Prime Minister forced for the sake of Queen and Country to do unmentionable things to a pig.  Fast forward a few more years and rumors sweep the internet that a now former UK Prime Minister did indeed do strange things with a pig whilst at university.  Allegedly.  Very, very allegedly.  No self-respecting reviewer would dig a hole for himself and this august site by forgetting to mention the words ‘allegedly’ and ‘allegation’ with a helpful serving that rumors are complete nonsense and please Mr Lawyer, don’t take my home away from me.

None of this is an impediment to Curt Pires effectively naming said Prime Minister as part of this interesting issue.  Wyrd #2 is a strange beast – a truncated main story with three backup strips designed to flesh out the character a little bit more.  As a result, it feels neither fish nor fowl (or pig) and while it is entertaining, it fails to hit the heights it is aiming at.

The writing and the artwork are a real treat.  Pires gives Wyrd most of the best lines, which are outrageous and all the funnier for it.  Wyrd #2 isn’t an issue that takes itself too seriously – after all, an immortal detective leaping out of a plane without a parachute on the way to assassinating the serving Prime Minister isn’t something that is anything other than extremely shallow.  The opening scene, in the church, before the ceremony is a really effective satire on the English cast system, and the duties and responsibilities inherent in being upper crust.

Antonio Fuso’s artwork appears in the first three stories and is a wonder to behold.  Angular linework and heavy shadows are complemented Stefano Simeone’s coloring which brings it all too life.  There are a lot of characters in Wyrd #2, and such is the intricacy of the art I was half convinced Fuso had based his characters on real-life people.  But the lawyers no doubt would’ve had something to say about that!

The last storyline, which features another mission for Wyrd, is where the art falls down for me.  It’s outlandish and easily the most cartoon-ish art I’ve seen in comics in the time I’ve spent reviewing.  I didn’t like it, but that’s just me.

While there are many fun elements in Wyrd #2, it doesn’t feel yet that the series has really found its feet.  The main story feels perfunctory and more interested in poking fun at certain real-life characters and the UK Establishment as a whole.

There’s also too much John Constantine in the look of Pitor Wyrd and in the depiction of the character – world-weary cynics with unnatural powers have been done before and done much, much better than this.  The pacing in this issue is seriously out of whack.  An under-running main story sees the issue padded out with three other stories that could each support an issue worth of material and a final story your reviewer actively dislike, mainly for the art.

Wyrd needs to improve, and improve quickly, if it is to justify its existence.  The writer needs to decide soon what sort of character Wyrd is and work on making him less of a Hellblazer clone and something more distinctive.  If Pires fails to do that, the constant unflattering comparisons will get tiring, very, very quickly.