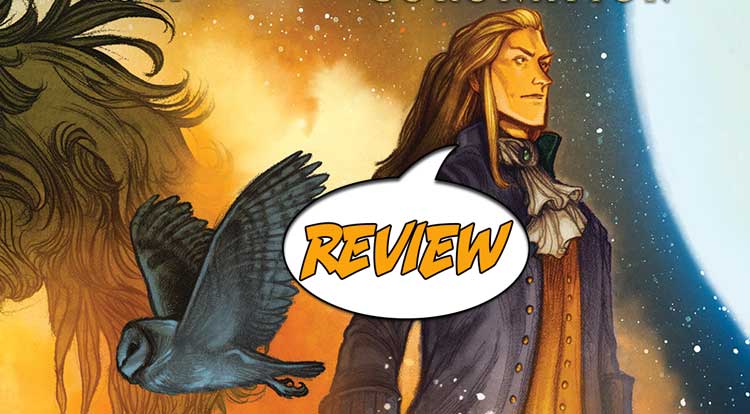 After a couple issues of noodling around, Jim Henson’s Labyrinth: Coronation #11 picks up the pace.

A last few puzzles and Maria reaches the Owl King’s castle! She is so close to her baby she can almost touch him, but what happens when the clock strikes thirteen? Previously in Jim Henson’s Labyrinth: Coronation: The Owl King is getting impatient – he wants to siphon away baby Jareth’s life. He tells Beetleglum to send word to his goblin army to concentrate on Maria. Beetleglum, who has grown attached to the baby, instead sends a note directing the general to spare her. The Owl King’s monster, Septimus, observes this and vows to hunt down Beetleglum. The goblin army fights the goblin resistance until Cible makes a speech that unites them in the idea that being a goblin should be more about fun than fighting.

AS THE CLOCK STRIKES THIRTEEN

As Jim Henson’s Labyrinth: Coronation #11 opens, Maria is on the wrong side of an enormous moat filled with monsters, and her magic chalk is running out. Who should show up but the gondolier (who dumps riders who can’t pay, and who invariably takes people where they don’t want to go). It is Tangle who figures out the puzzle, and Skubbin who tricks the gondolier into taking them without payment – and they reach the castle.

But then there’s something intriguing. Beetleglum is seated on a throne, in Jareth’s timeline, holding a crystal sphere, talking about Jareth, about how his story of Maria started out strongly, but he wandered from it. All Beetleglum has wanted harmony, and to make Jareth happy, and to keep him away from humans. Beetleglum has been around all along, but suddenly it seems that he has more agency that we may have first thought, and perhaps a bigger part in the story.

The parallel stories cut between each other more frequently. Maria has yet another puzzle to solve to get into the castle. Sarah reaches Jareth, and quotes her book, asking that he return her brother. Maria charges up to the Owl King and demands her son. As she reaches for baby Jareth, mechanical arms lift him out of her reach, and another pair grabs her. As the clock gets closer to striking, Skubbin and Tangle fight the Owl King and Septimus. Maria gets knocked loose and confronts the King, launches into a tirade, and gets as far as “You have no power over—“ and the clock strikes. We flashback to the climactic scene in the movie where Sarah does stumble upon the right words, only she says them in time.

And then we’re back to Beetleglum again, who realized from early on that he was different. But also that everything has a pattern, and everything repeats itself. Back in the past, the Owl King traps baby Jareth in a crystal bubble, and orders Septimus to throw Maria back to where she came from.

I like how this story is turning out to be more complicated than just an earlier version of the movie. While it hits a lot of similar beats, there are also some interesting changes to it. And the fact that right now, whatever happens to Jareth may not be what we’ve been expecting.

DRAWING OLD AND NEW TOGETHER

The art of Jim Henson’s Labyrinth: Coronation is solid, but one of the things that particularly stands out in my eye is the way it is used to emphasize the connections between Sarah’s story and Maria’s story. The movie has an owl motif, so bringing in an Owl King and continuing with panels with an owl is a straightforward way to make this connection. What is more clever is the use of the crystal bubbles, which were also a major motif in the movie. But here we see Beetlglum handling one, watching the action through it, letting it fall to the floor. What was once a device to connect the stories now twines them together even more tightly.

There’s a lot of expression in this issue, and I like the way we reach thirteen o’clock in both timelines. The reflections of the movie are quite good, and they make a strong contrast with a story where the heroine has failed. The lettering is great all around, from helping keep scenes separate from one another so we don’t get lost, to Tangle having more things to say in his, shall we say, rather tangled speech patterns.

BOTTOM LINE: THE STORY IS BACK TO ITS STRENGTHS

After a couple issues of noodling around, Jim Henson’s Labyrinth: Coronation #11 picks up the pace. I like that as we get so close to the conclusion, we still have questions and some uncertainty. That is not easy to pull off when the original story is so familiar.