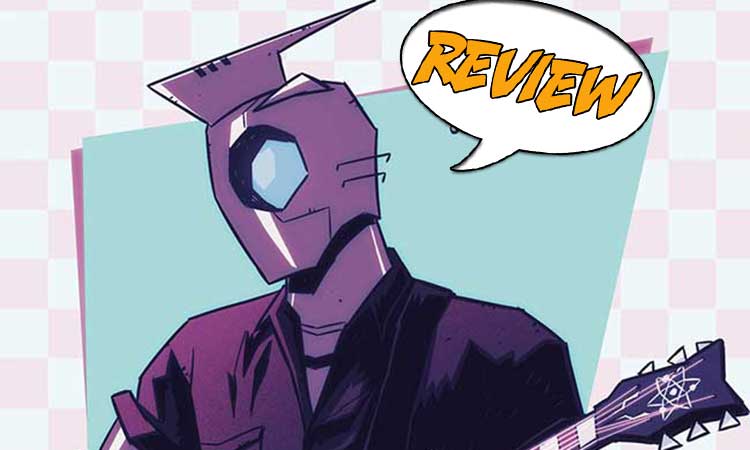 Well, we knew things wouldn’t stay peaceful for long. Vampires at Los Alamos! Where did they come from? What do they want? Previously in Atomic Robo: Dawn of a New Era: Robo has been working on building a robot son, Alan, from the AI from Hashima Island. And he’s keeping this secret. Foley is busy with three new interns, who use their free time to explore abandoned buildings around the Tesladyne property. One shed has a whole secret hidden basement – perfect for a clubhouse! Bernard is exploring a nearby lava tube and getting lost, losing his mind, or perhaps both. Vik and Lang stop off at Los Alamos on their vacation, which is much scientific fun for them. Or at least it is until the vampires show up.

We’ve had some breathing room, and now Atomic Robo: Dawn of a New Era #3 gets into the action. Last issue left off with vampires, but that’s hardly the only thing going on. These stories are so beautifully paced that we can get multiple really interesting plots happening all at once. Take Bernard, for example, who is lost in the lava tube. As a scientist, he starts thinking of other options to what’s happening, besides losing his mind. I love that our action scientists take some time to think about things, to consider other options, to not just jump to a single conclusion and stick with it. He starts finding more and more crystal shards, but just as he thinks they cannot possibly be from Atvatabar, an arm comes through the rock and drags him in. But only for a moment, as he emerges and, with effort, pulls out someone who looks suspiciously like the beings he met in Atvatabar.

Vik and Lang are at Los Alamos facing a room of vampires, whom we’ve also seen in an earlier story. While Vik asks the logical questions we’re all wondering (How many are there? How did they get there?), Lang grabs a fire axe. There is some hacking and slashing and then Jenkins arrives! Oh my gosh! It’s starting to feel like getting the team back together again. (And besides, I love coincidences.)

It’s still quiet at Tesladyne, where the interns are slowly cleaning out their clubhouse and coming up with plans for it. Foley and Robo chat briefly about the interns. And then there’s a delightful bit where Robo comes across the interns in room 103. They try to look innocent. Robo tells them he thinks they meant to sneak into room 107. It’s a perfect, humorous, Robo moment.

Robo’s work with Alan continues, including giving him another P. G. Wodehouse book. Alan’s motor skills are also improving. He’s also taken to wearing clothes. We also learn that Mr. Tesla and Mr. Turing were pen-pals for a while. Almost every time Atomic Robo and Alan interact, they touch on some interesting philosophical questions. I love these moments, and taking some time to think about them myself.

But not for long, because Vik and Lang arrive back with Jenkins in tow. The interns stumble upon all this and have to listen in. There is some rapid-fire exposition. Jenkins has been off-grid for a while, and has found out that the earth is under siege by the vampire dimension. They’ve been trying to establish a permanent doorway; Ultra was holding them back. Jenkins is all ready to call Tesladyne in to take over the vampire problem, except that right now, Tesladyne has nowhere near the assets they used to have.

The being Bernard rescued is Princess Nequa – and he can understand her and speak with her! It has to do with the crystals. But those crystals still carry some dissonance in them from Dr. Dinosaur, and that blight is killing them. But she also knows of a prophecy that told of a way to make things new.

This is one of the many things I love about the Atomic Robo universe. There have been several story arcs over the years, and each one has threads that can be (or have been) explored later. This makes the world-building so rich. And it’s deftly done. A longtime reader, such as myself, can be thrilled at what we tie into. But I believe that most new readers will get enough to go on from the story at hand.

Atomic Robo: Dawn of a New Era #3 has a distinctive look that just fits. There are always crazy things going on, so you never know what you’re going to see. When Bernard pulls Princess Nequa free, there’s a feeling of familiarity (if you’ve been reading all along), even though we don’t see her that distinctly. We’ve seen the vampires before, and Jenkins – although he looks like he’s been doing a bunch of stuff since we last saw him. That’s another thing I like – when we don’t see characters for a while, they’ve plainly been living and doing stuff.

And the facial expressions are just fun. From goofy vampire expressions, to Vik looking taken aback, to Lang looking seriously pissed off, we get a whole range, and they’re taken just a bit over the top to add to the humor. The interns as well are delightful, especially when they leave room 103.

BOTTOM LINE: HOLD ONTO YOUR HATS

Everything is forging ahead in the best action-science tradition in Atomic Robo: Dawn of a New Era #3. It’s a new adventure, but the groundwork has been laid so we feel like this has been bubbling under the surface all along. And who knows what more is going to happen before some of this gets resolved?