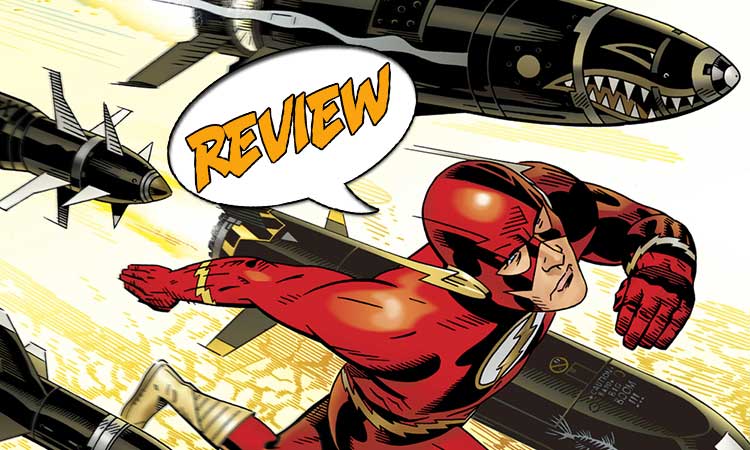 I always enjoyed it when Batman and Superman got along together, so it took some time for me to adjust to the World’s Finest duo fussing and fuming against each other. Now that this has taken hold, it’s not much of a jump to buy into Batman and the Flash having their own troubles.

The Flash and Batman make a great team, I believe. One is a CSI while the other is a detective. They should complement each other very well.

Just like Superman, however, the Dark Knight is having a tough time working with his fellow heroes in the DCU. It all comes to a head in this issue! SOLICITATION: “THE PRICE” finale! The two greatest detectives in the DC Universe take on the one cold case that will tear them apart!

As chief architect of the Sanctuary program that cost so much for so many, especially Wally West, Batman will be held accountable… by the Flash!

A cold case from the Justice League’s past has mysteriously re-opened, and Batman and the Flash—the only two heroes who stand a chance of cracking the case—are at each other’s throats! Our heroes must combat a demon from the past while burying their own inner demons in the process…and neither the World’s Greatest Detective nor the Fastest Man Alive will ever be the same again! But who is really pulling the strings here? And how does Gotham Girl fit into all this? Friendships will be tested, and blood will be spilled in this titanic crossover event…

CAN THE TWO DETECTIVES STILL WORK TOGETHER?

This four-part storyline has crossed over between Batman and The Flash, dealing largely with Gotham Girl’s desire to take revenge out on the Dark Knight over the death of her brother, Gotham.

Mixed into that story is the recent passing of Wally West, who just came back to the DCU, blast it! And I enjoyed having him back! I know there are some fans who will NOT take this very well!

See, Batman has long been the “brains” of the DCU. He solves mysteries no one else can solve, he’s been a strategic genius many times, and he’s been someone other heroes have been able to rely on.

But even Batman can make mistakes.

The Flash, who can run faster than anyone else, can see things coming that even the World’s Greatest Detective might not figure out. So, when Wally West once again leaves the DCU, he’s going to take it out on the one person who should have figured out this could happen. But Batman didn’t.

This four-parter has been scripted by Flash regular writer Joshua Williamson, and I have loved his work on this title. Honestly, he’d go a great job on Batman if DC needs him to.

One of the best sequences in this comic has to do with Iris West writing Wally’s obituary. In the middle of it, she realizes she could actually be writing about Barry’s swan song as well.

It’s tough when you must face your own mortality. When I was young and my parents were driving someplace, I heard them talking about death and dying, and they were having something of a funny time about it. I guess they had faced all this before.

I called out to them from the car’s back seat to stop it, because it made me realize I also wouldn’t be here someday, and the thought terrified me. They got quiet.

Williamson just handles issues like this with great skill, and these four issues remind me a lot of Identity Crisis, one of the most ground-shattering comics in the DCU. I love DC because their characters are icons, not everyday people. When even icons realize their time on Earth is limited, well, they also have to reconsider their next moves.

Batman and Flash are both strongly portrayed and consistent with how they’ve been written in recent years. Williamson is great when he does that, making each person live and breathe on the pages of the comic.

The pacing is strong, but slows down when it needs to, especially when the two heroes face off against each other. If I’m Batman, even though he’s my all-time favorite superhero, and I have to take on the Flash, I’m at the very least going to be nervous!

Batman is very much the opposite of the speedy Flash. He moves much more slowly and determinedly, but the Flash can make things happen faster than many of us might even imagine.

I thought the art was strong, making both heroes work in their own elements. Flash at one point begins to attack the Dark Knight, but he can’t go through with it. You can feel all the energy it took for Barry to stop inches from Bruce’s face. Well done!

BOTTOM LINE: Moving into the Year of the Villain

The last thing we see in this issue is that Batman and Superman and talking about how to resolve a situation that has them uncertain how to proceed. We find out that this story will move into “The Year of the Villain,” which is coming later in 2019 from DC.

I always enjoyed it when Batman and Superman got along together, so it took some time for me to adjust to the World’s Finest duo fussing and fuming against each other. Now that this has taken hold, it’s not much of a jump to buy into Batman and the Flash having their own troubles. Now I can’t wait for “The Year of the Villain!”