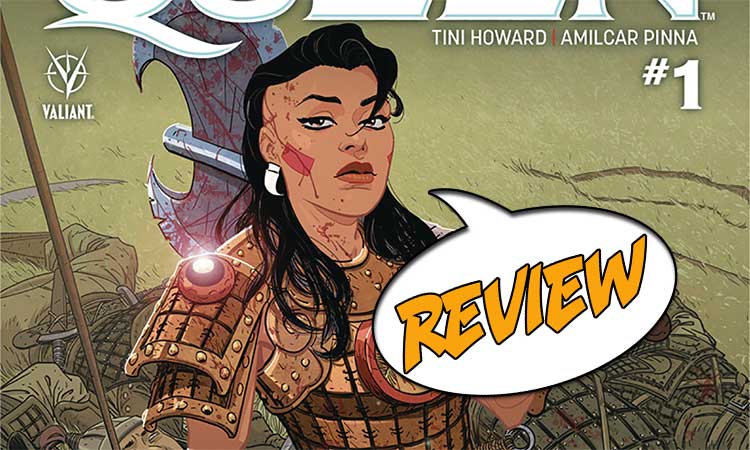 An ancient force, which has roamed the world since the earliest of times, stands largely unknown, until now. A group of ocean researchers is about to uncover one of the most amazing mysteries the world had ever misplaced, but we may have been better off if it remained was lost. The Forgotten Queen #1 is unleashed upon the world today from Valiant Entertainment! Previously in THE FORGOTTEN QUEEN: Despite what scholars and students of history would like to us to believe, there are many gaps in our knowledge of the past. Some things, such as the Rama Empire or the Baalbek Enigma, have been hinted at but never fully understood. Others are considered misunderstood myths or misconceptions that spawned a mythology of their own, such as the lost continent of Atlantis and El Dorado. Those examples overall are based on stories passed down and engraved into the human collective memory. However, what if something appeared that was as ancient as all history, but had largely remained unknown for millennia; or perhaps, hidden?

SMELL THE SEA AND FEEL THE SKY…

Out in the wide, trackless Pacific Ocean, the science vessel RV Lohengrin sits as two of its number dive down into the depths, searching for something long lost. The pair are on edge, something about this dive is off. From their ship above, they receive a warning of seismic activity. They need to retreat to the ship. Despite a feeling of illness and something not right, the male diver, Erik, insists he needs to retrieve some samples.  As he proceeds something goes horribly wrong and he begins to act erratically. The team onboard the ship decide they need to retrieve them immediately and begin to bring them up. Suddenly, the pair are torn apart from each other and the last thing Erik sees are the eyes of a woman.

The story suddenly shifts and we are transported to 1200 A.D., the tents which for the palace of Chinggis Khan. Chinggis Khan, known to modern readers as Genghis Khan, lies asleep in his great tent and is awoken by calls that his men have captured the witch. Arming himself and leaving his tent, he is greeted by a beautiful, if nor foul-mouth, woman who arrived at his camp on no horse. The great Khan has little patience for her, and orders his men to leave her to the desert and certain death. As they escort her away, she frees herself from the guard’s grasp, takes his helmet, and walks away. The two guards begin to fight each other, but the woman has already moved on, determined to bring back a tribute to the Khan and show her intentions. When she arrives back, still on foot, weeks later, she holds the guard’s stolen helmet, filled with precious water. So begins the association between the force known as Vexena the War Monger and the Genghis Khan. We learn the origins of this woman, who remembers no mother and no true name, and of her ability to trigger the fighting fury of those around her.  She is ancient, even then, and has seen and helped many empires rise and fall. The Khan will be no different.

Back in our time, the crew of the Lohengrin is dealing with being sideswiped by a whale, losing a diver and their communications, and a mysterious patron. Sarnai Oyuunchimeg is an archeologist, and she explains how her organization funds research grants, such as the one bankrolling the Lohengrin and its team, in exchange for the opportunity to search of artifacts. She has been collecting the parts of a suit of armor, a familiar armor with a Mongolia design, and are on the verge of completing it. She has a connection to the armor, and will be diving herself to locate the last piece.

Before the issue is through, we find out the fate of not only lost diver, but of Vexana and the Khan as Vexana finds something possibly more important to her than war.

ALL IS FAIR IN WAR AND LOVE

The Forgotten Queen is off to a promising start with this first issue. The premise for the title is very interesting, an ancient force that knows little more than war. Tini Howard (Hack/Slash: Resurrection, Rick and Morty) sets it all up nicely, and she really conveys the mercurial nature of Vexana. There are a few things that bother me as far as the writing, I can’t help thinking a diver brought up as fast as they were would contract the decompression sickness, but in the overall scheme of the story it is a little thing which could be addressed in the next issue. I have no problem looking past that sort of thing as the story just drew me in. Vexana is a bewitching character, and I would like to see how she interacts with the rest of the Valiant Universe. Will she be a force for good or ill, or just simply a force of nature?

The artwork by Amilcar Pinna (M.O.D.O.K. Assassin, Generation X) brings a strong game to the art. His female figures are lovely as they are powerful and he has a great eye for design. The final page is mindblowing, but I think that it is the simple facial expressions which grab you the most. You know what the character is thinking without having to read the dialogue. Excellent work and a treat to see.

THE FORGOTTEN QUEEN #1 is a book that feels fresh. The underlying story, the characters, the set-up, it all seems like a little something more than much of the standard fare on shelves. Valiant has been known for taking their characters in different directions, and this book is no exception.

THE FORGOTTEN QUEEN #1 is a book that you will want to remember when you get to your local comic shop.

The Forgotten Queen #1 has it all, war, love, mystery, all delivered by a wonderful team of creators.