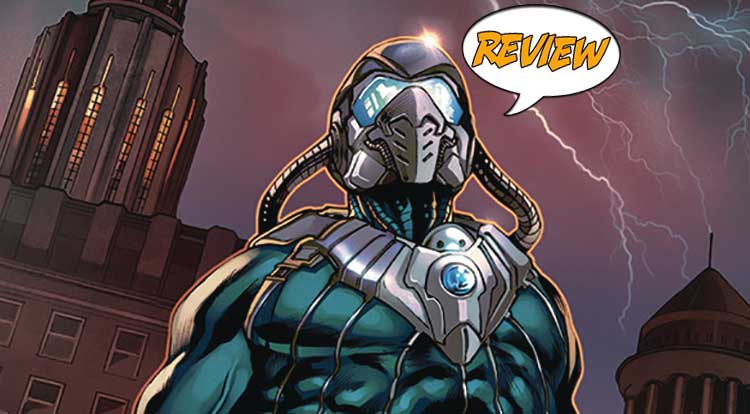 Merlin is at war with the ancient Order of the Tarot… but he has one important secret weapon! Major Spoilers review of Zodiac #1 awaits! Previously in Zodiac:  As the war between Camelot and the Order of Tarot wages Merlin the Magician looks to give himself an advantage… by eliminating all of his Tarot’s biggest threats.  And he has the perfect man for the job, a deadly magical warrior who was born to kill.

“ALL I WAS EVER GOOD AT WAS KILLING…”

We open with our mysterious masked assassin ruminating about his life and his awesome astrologically themed weaponry as he tracks down his quarry: Judgement and the Page of Swords, both highly placed in the Order of the Tarot.  Judgement (who looks remarkably like Malthael from ‘Diablo III’) hangs back when they are attacked, allowing the Page to face Zodiac one-on-one, boasting that none has ever beaten him with a blade.  His death is a foregone conclusion, and Zodiac immediately takes off thanks to his magical jet pack (which may be symbolic of Cancer’s crab-shell?)  When Judgement reports back to his fellow Order members (including someone who seems to be Purgatori, late of Chaos Comics) that there’s a new player in the game, it is decided that he must be the one to deal with the threat of Zodiac.  Elsewhere in New Orleans, Zodiac seeks out answers from Sybilla, an elderly sage, but she has his number, psychically and/or magically forcing him to relive his darkest moments (and giving us some disguised exposition on the way.)  When he awakens, he is greeted by Mystere, another Zenescope headliner, who offers to help him find his target once again…

The biggest question that I have after reading Zodiac #1 is “Did Zenescope buy the rights to Purgatori?”  It’d be kind of neat if they did, especially since visually the devil-woman shown is practically ‘Tori’s twin.  As much as I like the design of Zodiac’s armor and the descriptions of his lion claws, his “Scales of Justice” (two big guns) and his scorpion’s stinger, the character is kind of annoying as presented here.  At first, his habitual use of “lad” and “lass” made me think he was some sort of immortal, but the reveal that Zodiac is in truth Logan Patrick O’Connell from Belfast Ireland and that he learned his trade in the IRA is eye-rolling.  The dialogue throughout this issue is equally familiar, almost hackneyed, with first person Wolverine narration followed by Secret Society “We can not allow this!” chicanery followed by a tense tough-guy back and forth between Zodiac and Mystere.  The art has its moments, especially when characters are in motion or in combat, but there’s a distinct lack of clear facial expressions and a certain lumpiness to the anatomy that can work against the story-telling, especially during Zodiac’s flashback sequence.

BOTTOM LINE: I THINK I PLAYED THIS CHARACTER IN D&D ONCE

There’s a lot of neat bits and pieces here, but the “perfect assassin with a heart of gold, forced to fight a war that he never made” is a very familiar story, and the revelation that he is a product of The Troubles in Ireland is doubly-so.  (Especially since that makes Zodiac close to 40, which feels like it doesn’t fit the character’s attitude and physicality.  Then again, it is kind of nice to have a protagonist who isn’t a twentysomething.)  Still, Zodiac #1 has the built-in disadvantage of rolling out of a Grimm Fairy Tales crossover story and overcomes it well, and the best parts of the art are pretty impressive, especially the design work that went into the main character, earning a slightly disappointed 2 out of 5 stars overall. It’s not a terrible comic, but it is one that could have benefited from tighter and more expressive inking and perhaps some dialogue polish.  I do like this main character, though.

Though the ongoing Grimm Universe has a lot of familiar characters, this one just doesn't quite seem to put all the pieces together in a coherent whole. As clever as his gimmicks are, there's just too much cliché dialogue and too many predictable plot points.