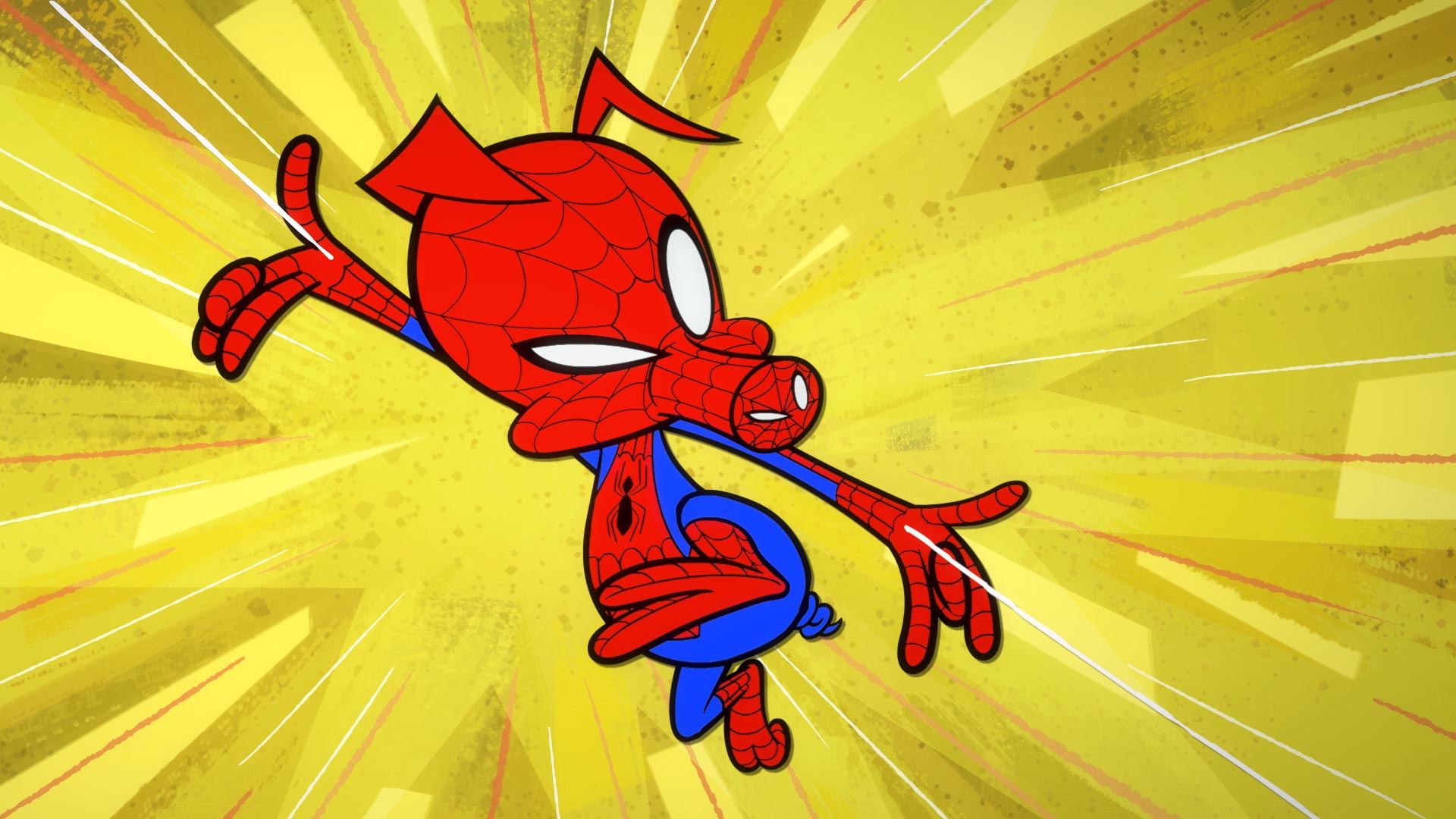 Last week our own Ashley Victoria Robinson was invited to the studio to interview many of the creative forces behind this major motion picture and some of the special features that will be appearing on the blu ray – including Miguel Jiron and David Schulenburg who both worked on Spider-Man: Into the Spider-Verse and were the director and producer, respectively, of the Caught in a Ham animated short that will debut exclusively as part of the blu ray release.

“Caught In A Ham” | SPIDER-MAN: INTO THE SPIDER-VERSE

“Caught In A Ham” | SPIDER-MAN: INTO THE SPIDER-VERSECatch this all-new Spider-Ham short among over 90 minutes of special features when you bring home #Spide…

MAJOR SPOILERS: Let’s start by talking about why the short stars Spider-Ham and your reactions to being presented with the opportunity to make Caught in a Ham?

MIGUEL JIRON: [We] had this post modern idea of combining these two things together into one silly package. For me, personally, I thought it was just an opportunity [with]as many people understanding who Spider-Ham is and knowing that this character exists.

DAVID SCHULENBURG: I think the idea of having a cartoony-like character in this film was different of itself and you saw it – and the audience saw it – and embraced it. It was a no-brainer. We got to do something with Ham! And, people just love him and they love seeing him and, so I think we were thrilled. Sony decided that we could do something because we knew there was an appetite for it.

MS: What was it like having to build an entirely new world from what we see in Spider-Man: Into the Spider-Verse?

MJ: It was really fun. Truth be told, we do have a couple glimpses of his world in Spider-Verse and we took those, really studied those, went to so many people – I worked on Spider-Verse, so I know all these people – Justin Thompson [production designer]we went to. We had a lot of fun flushing out and expanding those scenes to see what it would actually be like in his world. ‘Cause since we’re doing this in … 2D we could push thing a little further. You can make it more cartoon-y. You can make it more fun. It was a blast.

DS: Yeah. It was one of the more fun parts of it because it was like: people are going to want to know where he came from and we get to show that. We get to decide.

MJ: And Joey Chou is such a talented artist that he just made it amazing.

MS: Was there ever consideration of using one of Spider-Ham’s classic villains, rather than inventing a completely new character for the short? DS: I think we really wanted to make our own short and I think that yes, we could have. But, how much better to create something of our own? Everyone seems to have such a positive reaction to Doctor Crawdaddy – he’s kind of amazing.

MS: When is his action figure coming?

MJ: I want to know that!
It was fun because it was an opportunity to be a little more postmodern and referential with it. For most of his time he’s just questioning who he is. (laughs) What’s his name? He’s a very insecure dude, so it was fun to play with that character.

MS: Can you talk a little bit about interfacing with Titmouse and bringing in a team outside of the studio?

DS: Sure. Titmouse is known to do amazing cartoon work and we felt confident working with them because we know their style and sensibilities. We needed to work quickly. We needed to work outside of our main feature pipeline on something 2D and they were a no-brainer because of the past work that they’ve done. We felt pretty confident.

MJ: It’s kind of like if you want great 2D work done, you go to them, so it was a no-brainer. We went to them – they were the first people we went to – we were so thankful they said yes and Mike Carlos – who was the animation director [at Titmouse]– is just amazing. He really embraced the cartooniness in his work on the short.

DS: Which was very important that he had a similar sensibility as Miguel, so that they were really after the same goals. MS: When fans are getting ready to watch Caught in a Ham for the first time, what is the one thing you want them to be on the lookout for?

MJ: I love the mallet.

DS: The mallet is great. This is not really an Easter Egg, but I think it’s easily missed, is that he is going through that portal to end up in Miles’ world. That is the portal from Miles’ universe and to make that connection – to know it’s going to be shown before Alt Universe mode – it’s on cohesive piece. It’s one big throughline that incorporates not just the short, but the short and the film together, I think that’s super exciting. By just watching the short on its own you might miss that, so it’s not necessarily an Easter Egg, but it’s something that could be easily missed. I think that’s what makes this so special.

MS: Final question – we do know there is a Spider-Verse sequel coming. Would you be more interested in making another Spider-Ham short or potentially exploring a different Spider character?

DS: Either or. Both. I could make Ham forever. (laughs) He’s so much fun to make! But, you are right, all of the other characters deserve their moment and they could have been equally as amazing and, so for sure they deserve a turn.

MJ: Yeah, I love these characters. I feel like there’s so much opportunity for this and we don’t know what’s going to happen – at all – but, man, I would love to see a Spider-Man: Noir short. That would be dope. It’d be really great.