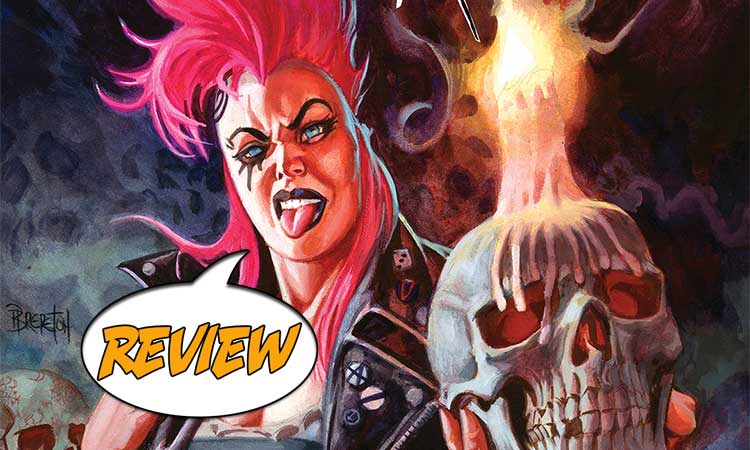 PUNK MAMBO #1 will slam dance its way onto your read list and put its unique brand of magic and mayhem at the top of your comic pile.

Punk Mambo has been through it all. She’s aided the white hats in their battles, she’s walked the Deadside and pissed off more than a few people, living and dead. Now someone, or thing, has taken something from her, and nobody takes from Punk Mambo. Presenting an advance review of Valiant Entertainment’s PUNK MAMBO #1, hitting store shelves April 24th, 2019. Previously in PUNK MAMBO: Punk has been in the mix a bit lately. She worked with Jack Boniface, aka Shadowman, to rid himself of the loa which possessed him. She even was recruited by MI-6 to take a team into the Deadside and traded blows with Master Darque. Now she is in her adopted home of New Orleans doing whatever she wants, and what she wants is to bust some heads.

ANARCHY IN THE BIG EASY…

New Orleans is a place of culture, music, and the arts. It is also a place where you can pretty much do whatever you want as long as you don’t get caught. But getting caught is exactly what has happened to friends of Punk Mambo. It seems a group of her, casual acquaintances, have disappeared down the notorious Grunch Road outside of New Orleans. Whether she really likes them or not, they are associates and she doesn’t really need a great excuse to go off. As she arrives on Grunch Road, she recognizes all the signs of a trap, and happily springs it. As the inbreed, deformed, cannibalistic residents of Grunch Road swarm her, Punk Mambo does what she does best, kicks ass. Through fist and magic she teaches the Grunch they should rethink their diets, and even when they think they have the upper hand, they realize they don’t. Punk calls forth her own personal loa, Ayezan, loa of doors, barriers, and beating. She doesn’t ride Punk the way most loa ride their subjects, Punk rides her. The two beat and bash a bloody path through their attackers until they find out the location of the ones who had been taken. So deeper into the swamps Punk and her loa go, until they find the home of Mama Grunch, who is preparing to make a little dinner for… sorry, out of… Punk’s acquaintances. But Punk is determined not to stick around for the first course, but she does want Mama Grunch to have her just desserts. Punk and Aye have the upper hand until a dark and wicked figure leaps from the swamps, and suddenly Aye is gone, the link between Punk and the loa severed. But Punk did not always have the loa in her back pocket, and has her own set of skills to handle the Grunch clan, but can she?

Punk realizes that while she might not have had a love for the loa, it was hers and someone took it without permission. Aided by the spirit of Marie LeVeau she sets out to find Aye, or at least to curb stomp the ones responsible for breaking that which she bound to her.

THE SINS OF THE PAST WILL HAUNT YOU

Once again I find myself reviewing a title by writer Cullen Bunn (The Sixth Gun, Bone Parish), and once again I find myself wondering exactly how he manages to continually pop up on my radar as a reviewer. I have reviewed multiple titles by Bunn over the years and I am nearly always impressed by the quality of his work. Punk Mambo #1 is no exception. When the character showed up in the Shadowman series a few years back, she was an interesting character that deserved fleshing out. When we got her origin story in Punk Mambo #0, we were given hints of what a deeper character she could be was, and now with Punk Mambo #1 we are shown that she can hold her own on her own. Bunn has visited the world of voodoo multiple times in other titles he has scribed, and here he returns to that subject and weaves it in deeper into the shared Valiant Universe. His dialogue for Punk seems fresher and more tru to life than a few of her other appearances, and it helps to flesh the character out and give her a voice that stands out from other characters. With a great cliffhanger, I’m really looking forward to seeing what else he has in store for this punk rock voodoo priestess.

On the art duties, we have Adam Gorham (Jughead The Hunger, X-Force). I’ve reviewed Gorham’s art multiple times as well, and it is great to see he is still delivering the solid product that makes him an in-demand name. Part of what has to be remembered about Punk Mambo is she is an older woman in a young girl’s body. She made her deals and gained her powers as a young teen, and some artist may be tempted to forget that and draw her as a femme fatal. Gorham manages to keep the realistic teenage figure you would expect from a teen, but adds some little touch that conveys the fact she is in her forties. It is a little thing, but if you are coming into this series knowing something about the character, it is a pretty big deal. Nice panel construction and a good eye to story flow make it for another enjoyable issue.

Punk Mambo is one a title for fans of the old school, rebellious magic-user genre that has been made so popular by another British born character. Bunn is taking her on what seems, on the surface, to be a standard adventure, but there are hints that there may be some changes in how the character operates and works. While I do not think she needs to be fully integrated into the Valiant Universe of heroes, I think she will have a great position as the one that they go to begrudgingly for help and who has no qualms about telling them to bugger off. She’s a strong female lead with an out of the ordinary look and background, and will be just what a legion of fans may be looking for.

PUNK MAMBO #1 is a solid return for a good counter-culture female character, and she looks to be ready to but her boot print on the backsides of the darkest and creepiest of the Valiant Universe. Go ahead and pre-order a copy now.