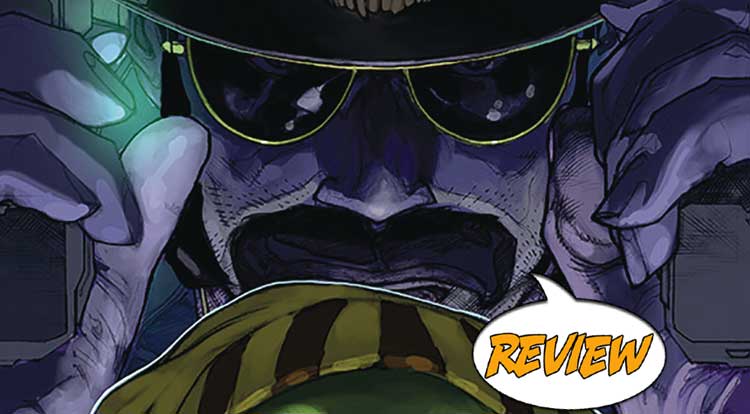 Sharkey The Bounter Hunter #1 (of 6) Review

Didja hear the one about the intergalactic bounty hunter who drives an ice cream truck?  Your Major Spoilers review of Sharkey The Bounty Hunter #1 awaits! Previously in Sharkey The Bounty Hunter #1: Set in a brilliant new sci-fi universe, Sharkey is a blue-collar bounty hunter who tracks criminals across the galaxy in his converted, rocket-powered ice-cream truck. Aided and abetted by his ten-year-old partner, he’s out for the biggest bounty of his career.

On planet Tefi-8, a hive of scum and villainy, a blue-skinned dirtbag gets a free drink from a woman who is half cybernetic.  Sharkey downs it gratefully before taking down his latest quarry, a creature called Multiple Jax, whom he takes down with a toilet.  We find that Sharkey is heavily in debt, with 90 percent of his bounties being taken by his creditors, right before he hooks up with the cyborg woman (whose perfectly-human rack is shown clearly, while Sharkey’s genitals are shaded by the incredibly dark and muddy coloring.)  As they enjoy a post-coital smoke, they are interrupted by a young boy, Jax’s nephew, who insists that since Sharkey took down his guardian, it’s now the bounty hunter’s responsibility to deliver him across the galaxy to his only remaining family. Elsewhere, a woman named Cassandra kills a roomful of her betrothed’s guests, only to reveal herself as Gambol Bliss, another hunter, who is after the next big score, the one that could put Sharkey back in black ink.

I HAD HOPED THIS WAS A BURT REYNOLDS SEQUEL

Any comic book collaboration lives and dies on the strength of the synthesis of creators, but this issue felt like it had a fundamental mismatch for me.  Bianchi’s art has its characteristic impressionistic take, making the huge-eyed young waif who talks Sharkey into helping him out even more compelling, but a dark and muddy coloring job brings it all down a notch.  There are some spectacular designs in the issue, including Sharkey’s ship, the Snowcone, but even as complex and fascinating as some of it is, it features almost TOO much detail.  The story is a very familiar collection of tropes with the occasional flash of science fiction wildness (Sharkey’s lady-friend is in the middle of being surgically altered into a security vehicle, which is a little bit funny, but kind of ridiculous, and doesn’t explain why her alterations don’t include the parts that would get this an R rating on Cinemax), but mostly it’s a lot of the regular “down on his luck private eye” moments of a ‘Rockford Files’ episode with some cursing, ultra-violence and sexual situations.

All in all, Sharkey The Bounty Hunter #1 suffers the most from the self-indulgent elements of the story being told, with the better elements of the art being muted by the coloring issues and some of the best world-building bits unraveling if you think about them too hard, earning 2 out of 5 stars overall.  There are a lot of places that this story could go, even with the shopworn parts of its plot and characterization, so I might check it out in a collected form, but this first issue was quite disappointing for me.

The down-on-his-luck bounty hunter with a heart of gold is familiar and Bianchi's art is abstract to the point of being muddy, but it makes for an interesting first chapter.