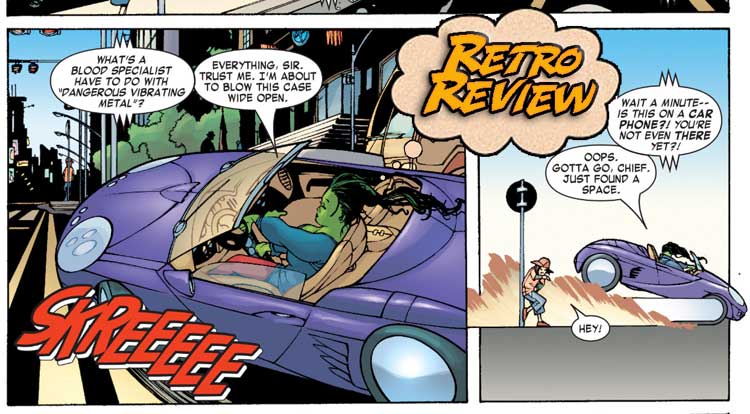 Previously in She-Hulk:  After an emergency transfusion from her cousin, Jennifer Walters’ life changed forever, though not unexpectedly, as that cousin was Bruce Banner, The Incredible Hulk.  The gamma radiation changed her life forever, allowing her superhuman power and helping her to overcome her lifelong shyness.  After losing control of her Hulk side and destroying a small town in a rage, Jennifer has embraced her outgoing party side.  Our story begins as she wakes up in her suite in Avengers Mansion, having brought home an underwear model for a one-night stand.

It makes for an awkward breakfast. This issue also features flashbacks to her time in law school, showing us the quiet, nebbishy Jennifer whose classmates didn’t even recognize her as she was named first in the class.  Having awakened with one of People Magazine’s sexiest men alive, she launches herself into her day, racing to get to court in time for her latest trial, where her Avengers knowledge manages to cross over into a successful defense. Her closing arguments are interrupted by an Avengers emergency, during which She-Hulk has to take down The Blizzard and MODOK with her teammates, still unaware that the legendary attorney Holden Holliway is head-hunting her for her lawyerin’ skills.  With the world saved, She-Hulk and Hercules join forces for a huge victory party at Avengers Mansion, ruining Jarvis’ day for the second time. Faithful Spoilerites, when Iron Man is worried about your partying, things have officially gone too far.  Slott’s script is really well-done in this issue, making the point that Jennifer is desperately partying a little too hard to get past her guilt and fear, and Bobillo does a wonderful job on the art, delivering one of my favorite She-Hulks this side of John Byrne’s.  Returning to court, she gets a big win in her Vibranium defense, with in turn leads to another She-Hulk bash, which leads to Captain America knocking on her bedroom door the next morning. The moments where she awakens are the most telling parts of the issue, as the first time, she opens her eyes as Jennifer and worries about getting the “I went to bed with She-Hulk and woke up with *this*” face, and the second she mistakes her paramour for a spy with a bomb.  It’s very awkward, and a little bit sweet, especially when she gets fired from the D.A.’s office after her win turns into a mistrial.  Apparently, the judge was convinced that her presence might have swayed the jury to vote with the big hero who just saved the world.

Also, she crushed one of the photocopiers making prints of her butt, a charge which she vehemently denies until she is told that it was a color copier, a real laugh-out-loud line for me.  Going to a dive bar to drown her sorrows at getting fired and thrown out of her home the same day, Jennifer is attacked by The Blizzard.  Their would-be fight turns into the two of them getting horrifically drunk together, sharing their worries about their place in the world.  It’s telling when She-Hulk confides that being a “big shot” can feel really hollow, just in time for Holden Holliway to walk in. Holliway calls her on her childish behavior, offering her a job on the sole condition that he is not hiring the super-strong idol of millions who can drink anyone under the table, but Jennifer Walters, the crack lawyer who came up with the Vibranium defense and does the leg-work that her alternate self chooses to just leap over.  She-Hulk #1 is a fascinating comic on a number of levels, showing the usual Slott humor without overshadowing the drama at the core of the She-Hulk character, and featuring some really attractive art that makes both Jennifer and her alter-ego look cute as a button, earning 4 out of 5 stars overall.  This arc really redefined the character for a whole new audience, giving her a depth that some previous creators neglected and making both sides of her life important.  Now, if we could just get someone to add her the the Marvel TV or cinematic universes already!

Giving us everything we need to know about our hero and her dual life, adding in some important bits of character and setting and doing it with style, this is how a number one issue should go.