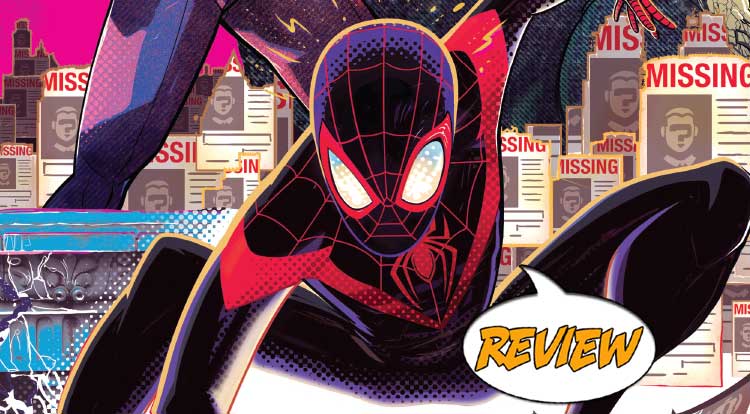 Spider-Man teams up with Captain America to find missing children… but are they up to the challenge?  Your Major Spoilers review of Miles Morales: Spider-Man #3 awaits! Previously in Miles Morales: Spider-Man:  Not long after Miles met Eduardo, his maybe-girlfriend’s nephew, the kid went missing!  Right on the case, Spider-Man has some good luck, running into the Rhino, who was also looking for a lost child.  Spider-Man and Rhino followed their leads to Tombstone, and that’s where things got complicated…

Miles starts out this issue shaken by the appearance of a second guest-star, Captain America himself.  Cap is suspicious of Rhino’s motives at first, but takes Spider-Man at his word that the villain is on the up-and-up.  Tracking the lost kids thanks to an app on Captain America’s phone (a moment that has teenage Miles helping the 1920s-born Cap deal with the complicated smart phone, which is a really fun moment that is not quite too on-the-nose for my tastes), they track the kidnapped kids to Brooklyn, where they discover the man behind it all: Snatcher.  Using his mental powers, Snatcher manages to overtake the minds of Spider-Man and Rhino, but struggles to keep Captain America under wraps.  With his energies focused on keeping the First Avenger down, Spidey and Rhino almost get the kids clear of his influence, but the villain turns the mind-controlled children against one another, leading to an angry Spider-Man venom blasting him right in the breadbox for the win.

SPIDER-MAN LOOKS PRETTY GREAT, BUT HIS EYES ARE… ODD

A lot of the time, the success of a Spider-Man story is defined by his mask for me, and this issue is a mixed bag on that front.  Miles’ red-on-black webs looks pretty amazing, but certain scenes have a strange foreshortening effect on his eyes.  I’m not sure if it’s intentional to differentiate him from the Parker Spidey, but I found it distracting more than once during the issue.  The basic thrust of this story is quite solid, especially the ending sequence, where Miles ruminates about how life is about the people you see each day while taking his sorta-girlfriend and her nephew to the movies.  The problem storywise is the villain, whose flak jacket, sleeve tattoos and goggles make him the modern equivalent of a Marvel Team-Up opponent, one who is over-the-top amoral and proud of it, but gets taken down with a single Spider-punch.  His visual looks pretty good, especially the consistency of his various armored plates and Judge Dredd boots, though, and he looks great getting KO’d by our hero.

On the one hand, this issue features a grounded, interesting detective story wherein Spider-Man and Captain America bond over their Brooklyn roots, a woman who is clearly not Alexandra Ocasio-Cortez for legal reasons and Captain America deferring to Spider-Man’s local knowledge and expertise and some strong art.  On the other hand, Miles Morales: Spider-Man #3 has a villain that is literally unbelievable and some strange mask shots of the title hero, but the final balance is in the creative team’s favor, with the strongest parts of story and art earning an above-average 3.5 out of 5 stars overall.  I don’t want to ever see Snatcher again, but I’d love to see more Spidey/Cap/Rhino team-ups in the future, as they make an interesting triumverate.

I like the basic thrust of the story (and the cameo by Captain America's congresswoman) but the villain is a little too pantomime evil to hold it all together, with strong art and coloring.