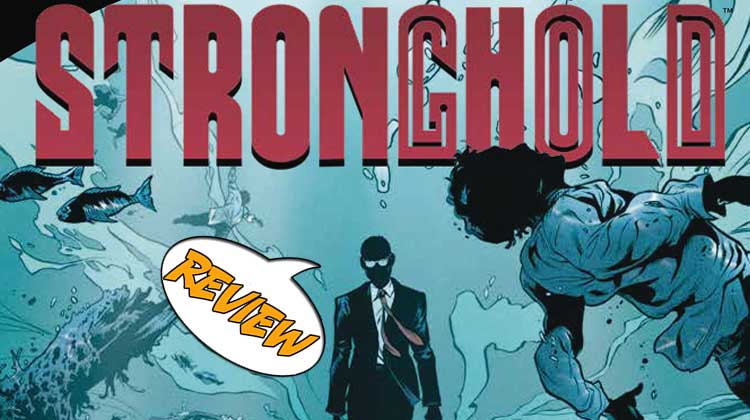 Each of us has likely felt that we were more than our surroundings—sometimes much more, in fact.

In Stronghold, we come across people who truly ARE more than what we see. When two of them are attracted to each other, there could be cosmic consequences! SOLICITATION:Our planet is actually a prison designed to both trap and shelter an amnesiac alien entity of incalculable power. Now known as Michael Grey, this cosmic angel of destruction currently believes himself to be an ordinary, midwestern insurance underwriter, who belongs to a global secret society dedicated to making sure he never discovers the truth about his past.
To make matters worse, our hero has fallen in love with Michael Grey. And for their love to be born, Earth must die.
Phil Hester (The Coffin, Deathstroke, The Darkness, SHIPWRECK) and Ryan Kelly (The Wicked & The Divine, Lucifer, Saucer Country) weave a tale of cosmic horror, high adventure and tragic romance unlike anything else in comics.

HORROR/TERROR ON A GALACTIC YET SMALL SCALE

There are some creators I just HAVE to follow. One of those is Phil Hester, a comics creator who can both write and make art, each superbly. When his name is on a comic, I buy it!

This is one of those cases when Phil is not doing both (which I always support), but serving as writer. I’ve always found his ability to create stories that tap into our deepest feelings and needs so very compelling. And that’s what’s going on in Stronghold.

Michael Grey is the main person in the story, and I was happy to see that he’s a person of color. It’s a trend I see happening more and more, and I support it when it is done like this!

Grey does not remember what appears to be his past. The pictures around his home are the ones that came with the frames, so they aren’t his real family. What’s really engaging is that he’s actually an angel of death and destruction, and Earth is safe as long as he doesn’t remember that.

One of the first things that happens in the comic is when he comes to the aid of a child about to die after falling off a bridge. He does rescue the girl, but slips back into the water, only to discover that he should have died… but he can survive without breathing when he’s underwater.

Enter Claire, a girl who has spent the last year as a “gap year,” a time in which she stays among “normals” but is returning to her true home after that time has passed. She much drink something called “the water” in order to remain among her people and even remember them at all.

The fascinating element about Claire is that she longs to be with Michael Grey, called “The Primacy” among her people. Not just protect him—develop a relationship with him beyond simply looking out for him.

When the two begin to interact, some sparks begin to fly. When Michael takes on some thugs rather destructively, Claire runs away, leaving Michael to wonder exactly what he really is.

It would be easy for this tale to get bogged down in the details, but it doesn’t. Hester’s ability to create vibrant characters in challenging circumstances really shines here, and we’re left wanting to know what will happen next!

By the way, the Stronghold is something akin to a church, one that has an all-too-real mission to complete. One of the strong points of the comic is seeing the conflict between real feelings and potential global destruction. We want them to be happy, but not at the cost of the end of the world!

The pacing is quick, and when information is needed, it comes in interesting ways. For example, when Claire’s mother attacks her, there’s a reason for it that impacts the story quite significantly.

Look, I always prefer when Phil draws his own stories, but if we can’t have that, then Mr. Kelly does a great job of making the unbelievable accessible.

Action sequences fly by, and the appearances and facial expressions of the individuals are something we can understand. Even when we’re seeing something impossible happening before us, we can buy into it because the art works.

I’m always drawn to a story in which I cannot tell what will happen next. Stronghold makes me care about the two main characters, but I must also worry about the world around them.

This kind of conflict can’t end well, and it’s like watching an auto accident happen—we just can’t take our eyes off it! Powerful conflict with high-power consequences can’t help but make us pay attention!

I honestly don’t know what the creative team has in store for us, and I always love a comic like that! After all, I’ve read comic books for years now, and it’s a rare and wonderful thing to read a story that challenges and surprises me! This one does that powerfully! Highly recommended!

It’s a rare and wonderful thing to read a story that challenges and surprises me! This one does that powerfully!