BOOM! Studios has released a first look at the upcoming R.L. Stine’s Just Beyond: The Scare School a new original graphic novel that arrives in September 2019.

In JUST BEYOND: THE SCARE SCHOOL, the first original graphic novel in the series, something’s not quite right as we meet three 12-year-olds in strangely old-fashioned clothing creeping through the halls of Scare Middle School and trying to blend in with the present-day students while evading a menacing cyborg creature, the Drogg. Where did they come from? And why is this scary mechanical monster hunting them down? Thrust into the middle of this terrifying mystery are three modern day students, Josh, Jess, and Marco, who end up fighting for their lives while trying to escape the very nightmare that the three kids in old-fashioned dress were fleeing from, a school of horrors that exists JUST BEYOND their very own. 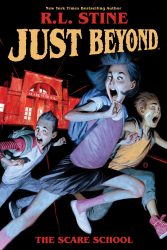 This is the first in a new series of OGNs written by R.L Stine, along with artists Kelly and Nichole Matthews. Be on the lookout for R.L. Stine’s Just Beyond: The Scare School when it lands on September 4, 2019.