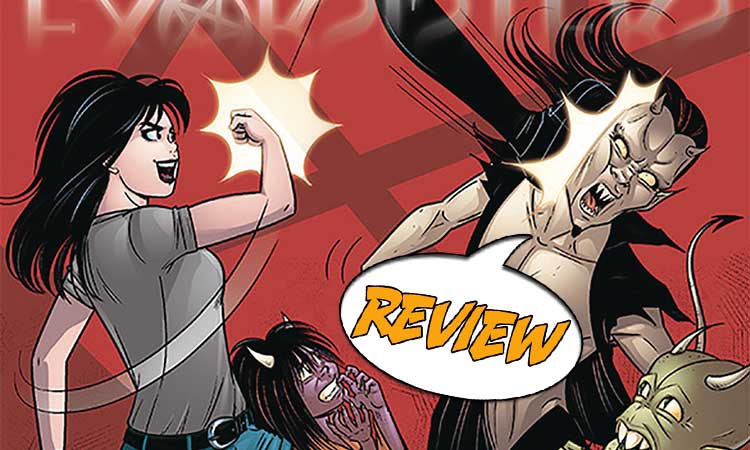 We learn a bit more about the First Shadow, but what does it have against Earth, and why is Cate and Kate’s mom helping it? Previously in Exorsisters: Cate and Kate hear a cry for help and find a guy (Drew) being menaced by a very stereotypical Satan. Drew tells them he sold his soul to become a great criminal, but it has backfired. He is a great criminal, but somehow he never manages to keep his hands on the loot. This seems weirder than their normally weird cases, but things are soon made clear when they find a feather. This lures out an angel who fell to earth but survived the fall. (To disguise himself, he found a very stereotypical Satan costume…) When they talk to the angel, they have an odd experience where people not only don’t notice them, but they’re missing their shadows. The angel lets slip that they’ve been taken by the First Shadow. Buzz, Cate’s ex, pipes up that the First Shadow killed Beelzebub as well. Drew gets into trouble, and Kate opens a door to hell so they can rescue him, but she finds only blackness.

Exorsisters #5 is at a point where finally the threads we’ve been given in each issue start really coming together. We’ve seen hints that there are bigger things going on, but so far there’s been a sense that Cate and Kate just tend to have wacky and weird adventures. It’s interesting to watch the plot become more cohesive.

Cate, trapped in the darkness, has a flashback to when her mother gave her (Cate’s) soul to Hell. Demons have rules, and Cate had to sign a contract under the threat of having horrible things happen to her mother. As it turned out, Cate had a history of seeing herself as Cate and Kate – the one who would do the things that Cate was afraid to do. When she signed her contract, she signed it as “Kate,” and that’s when her soul became separated from her body. That’s a surprisingly satisfying explanation (although now I’m really wondering about her mom).

Anyway, having a Kate around is useful, as the darkness does not affect her. She breaks through, closes the door to Hell, and saves Cate. They barely have time to recover when the angel (minus most of his wings) walks in with Buzz, whom he wants to destroy because, well, angel – demon – you get the idea. It’s all the work of the First Shadow.

And we finally get our explanation, and this is rather elegant. When the Creator created light, this caused the First Shadow – the Creator’s own shadow. It is but a mere shadow of the Creator, with an infinitesimal amount of the Creator’s power, but remember that a small fraction of infinity is still infinity. (As Kate says, “Damn you, math!” which is quite funny.) And this sets up an interesting take on the problem of evil, although technically it puts the First Shadow beyond evil, making it something that just wants to go back to nothingness again, and will pursue any means to this goal.

Drew shows up – who they thought was in Hell – but it isn’t actually Drew. It’s the First Shadow! It decides to get rid of the girls, when their mom shows up and tries to bargain with it. This is the point where the plot feels like it’s rushing toward the end which, to be fair, does have an amusing twist. Having Drew and Mom just kind of show up felt weak, especially in contrast to the well-thought-out backstory for the First Shadow. I’m all for coincidences, but this sort of felt like bringing in the only other characters we haven’t seen yet.

THE MALIGNANCY OF THE FIRST SHADOW

As it has been all along, the art in Exorsisters #5 is terrific. The girls are beautiful and the lines are so clean. I like the use of panels in the opening scene with Cate’s flashbacks. These are very nicely done, with colors keeping them separate from present-day Cate and each other. And I like the way young (and younger) Cate is drawn – she is plainly a younger version of Cate.

Buzz as a combination foil and source of information continues to amuse, as well as the moments where Kate is a little overwrought. The contrast between Kate and Cate is usually a good source for humor. I find it interesting that right after her rescue, Cate is more untidy than usual, looking even more like Kate.

I do like how the First Shadow keeps showing up, in people’s shadows, with just a grin and glowing red eyes to set it apart. As simple as this concept is, it communicates malevolence effectively.

It’s taken us a little time to get here, but in Exorsisters #5 we’re finally seeing how many of the puzzle pieces start fitting together. It’s not exactly your typical take on Heaven and Hell either, which is intriguing

in Exorsisters #5 we’re finally seeing how many of the puzzle pieces start fitting together.