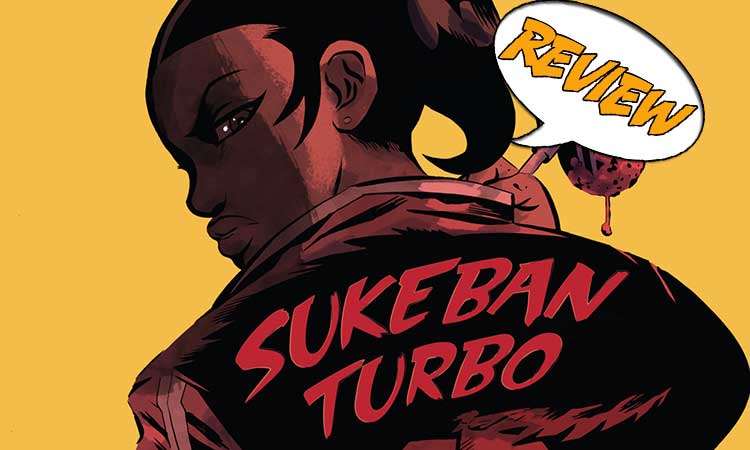 Sukeban Turbo #4 stomps all over the mean streets of Brooklyn, depicting the empty lives of a vicious band of girls eager to get rich, and get out.  Caught in a trap, Shelby and the other members of Sukeban Turbo set up a plan to escape the clutches of Jared, and along the way, make their fellow member Kate pay for her betrayal.  It’s vicious, it’s fun, it’s Sukeban Turbo #4! If Quentin Tarantino picked up a pen and wrote a comic, Sukeban Turbo #4 would probably be it.  It has all his trademarks – visual flair, mindless violence, mouthy characters, a twisty (and twisted plot), gratuitous cursing, and the satisfying crunch of a golf club to the head.

The girls of Sukeban Turbo lead lives on the edge, dealing drugs, intimidating victims and looking for the ultimate score to pay their way out of Brooklyn for a better life.  Along the way, though, their leader, Shelby, faces betrayal from her best friend Kate, and the menace of the man they’ve fallen in with, Jared.  Not only that, Shelby has to deal with her parents who shun her, and her cousin Sam, lead singer in a boy band, who’s dealing with his own issues.

There’s a lot of fun to be had with the girls of Sukeban Turbo.  Shelby is the standout; a girl who has taken enough crap for a lifetime, and now wants everyone who has crossed her to pay.  She’s savvy and street smart, and while nursing her grudge against Kate for revealing her secret links to Sam, is prepared to bide her time and plan her revenge.

The other characters in Sukeban Turbo are just as ruthless.  Sam refuses his cousin’s help, rebuffing her in a key scene in the issue that determines his fate, and her’s.  There’s a moment where you see his vulnerable side, long absent from the series, but you can also tell his shot at redemption is too little, too late.

The other characters in the issue are equally as broken – from Shelby’s parents who think she is a worse cut up than her brother, to the dismissive Jared who is willing to use anyone to realize his dream of building a nightclub.  Kate has betrayed Shelby’s secret to win Jared, who despises her.  Sam has previously hooked up with a porn star, Alanis Parrow, who has seen enough of him to know she doesn’t want to be with him again.  Sukeban Turbo #4 is one of those books where none of the characters is appealing, and most of them, if not all of them, are frequently awful to everyone around them.  Sometimes, that can be very draining for the reader, who is desperately casting around for someone to like.  But this issue and series manage to skirt that pitfall because of the strength of the writing, and the bravado of the characters who are caught in a trap of their own making.

Victor Santos’ art is the main reason Sukeban Turbo #4 stands out so much.  There’s no effort at anatomical accuracy – Jared’s bulging shoulders make him look more troll and less human, for instance.  Instead, the characters, especially the leads, are bold and brassy, with strong features that draw the eye.  Brooklyn is a badly lit hellscape, all darkness, and swarming shadows, and as the cliché goes, basically a character itself.

Santos makes inventive use of angles, ‘shooting’ scenes and panels from high, low and off center.  Coupled with an exaggerated two-dimensional effect to the artwork, and you have a dynamic comic book that feels active in your hands.  It’s an impressive feat of artistry and makes the issue and essential visual experience.

Characters don’t have to be likeable for you to enjoy a story.  Take any Tarantino movie and you’ll see the truth in that.  The key to enjoying the story in this instance is the strength of the storytelling and characters.  Shelby has agency and is willing to plot and plan against the best of the men.  She takes no garbage, and can throw her weight around when needed.  Sukeban Turbo #4 barrels along, taking the reader with it and by the end of it, you do feel that the change from Sukeban Tribe to Sukeban Turbo is not only earned by the characters, but by the reader too.

Sukeban Turbo #4 is about as damned close to a Quentin Tarantino movie in comics form as you’re going to get! It is a gut punch of a book, full of incident and character, that evokes the best of pulp movies, with compelling art to match