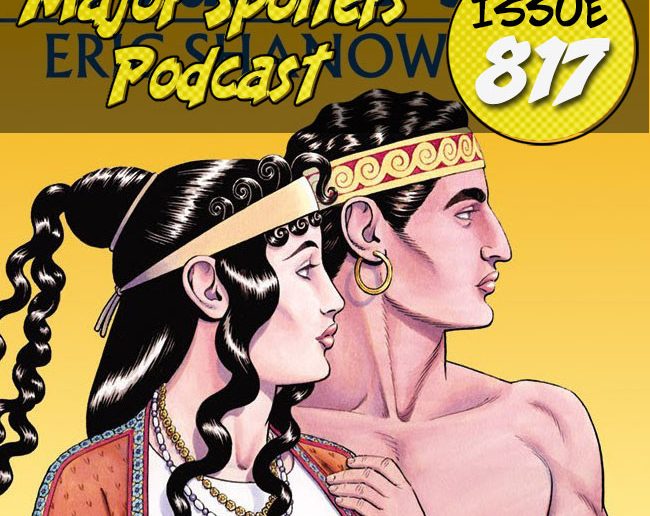 Spider-Man and Gwen Stacy sitting in a tree? The complete history of the Trojan War? Batman and Flash teaming to bring down Gotham Girl? GO-BOTS!? What is going on? Find out in this week’s Major Spoilers Podcast.

In Mexico, Gwen Stacy Never Died… or Did She?

In the 1970's, publisher La Prensa did not believe Mexicans would read Spider-man after Gwen Stacy died. They created 45 original issues after Spiderman 119 where she lives, that have never been translated or reprinted. This is their marriage issue. Marvel needs to collect these! pic.twitter.com/dx2z6NO5JX

STEPHEN
BATMAN #65
Writer: Joshua Williamson
Artist: Guillem March
Publisher: DC Comics
Cover Price: $3.99
Release Date: February 20, 2019
“THE PRICE” part three! The two greatest detectives in the DC Universe take on the one cold case that will tear them apart!
As chief architect of the Sanctuary program that cost so much for so many, especially Wally West, Batman will be held accountable…by the Flash!
A cold case from the Justice League’s past has mysteriously re-opened, and Batman and the Flash-the only two heroes who stand a chance of cracking the case-are at each other’s throats! Our heroes must combat a demon from the past while burying their own inner demons in the process…and neither the World’s Greatest Detective nor the Fastest Man Alive will ever be the same again! But who is really pulling the strings here? And how does Gotham Girl fit into all this? Friendships will be tested and blood will be spilled in this titanic crossover event…

What dark secret lies at the center of Gobotron? You won’t believe the answer! From the creative mind that brought you IDW’s Transformers vs. G.I. Joe! Visionary creator Tom Scioli unleashes his imagination on the bizarre, absurd, and wonderful world of Go-Bots!

RODRIGO
THE DRAGON PRINCE (SEASON 2)
Program creator: Aaron Ehasz:
In the magical land of Xadia, magic comes from six primal sources: the sun, moon, stars, sky, earth and ocean. When human mages create a seventh kind of magic — dark magic — they start capturing and harvesting the unique magical creatures they need as ingredients, which sparks a war between Xadia and the Human Kingdoms. Three kids from opposite sides of the conflict — two princes and an elven assassin sent to kill them — discover a secret that could change everything and decide to join forces and go on an epic journey. That trek could be their only hope of ending the war and restoring peace to both worlds.

Traveling from one place to another takes up a lot of time, and honestly, that time could be spent doing other things. Over the last year, I’ve aged three months just for travel alone. While time travel would allow us to skip that aging bit, we’re still going to age at a normal rate over time.

Age of Bronze Volume 1: A Thousand Ships
Eric Shanower
Publisher: Image Comics
Daring heroes, breathtaking women, betrayals, love and death–the most spectacular war story ever told: The Trojan War. When a lustful Trojan prince abducts the beautiful Queen Helen of Sparta, Helen`s husband vows to recover her no matter the cost. So begins the Trojan War. From far and wide the ancient kings of Greece bring their ships to join the massive force to pledge their allegiance to High King Agamemnon. Featuring the greatest of the Greek heroes: Achilles, Odysseus, and Herakles, along with a cast of thousands. AGE OF BRONZE: A THOUSAND SHIPS reveals hidden secrets of the characters` pasts, serving up joy and sorrow, leading up to the brink of war, and foreshadowing the terror to come. Age of Bronze will be included in a major international exhibition travelling to three German museums in 2002. The exhibit is centered on the current excavations at Troy and features Age of Bronze in an exhibit devoted to modern interpretations of Troy. Age of Bronze has been nominated for numerous Eisner (The comic industry’s Oscar) Awards. Rack it in your mythology and historical fiction sections for even more sales success.