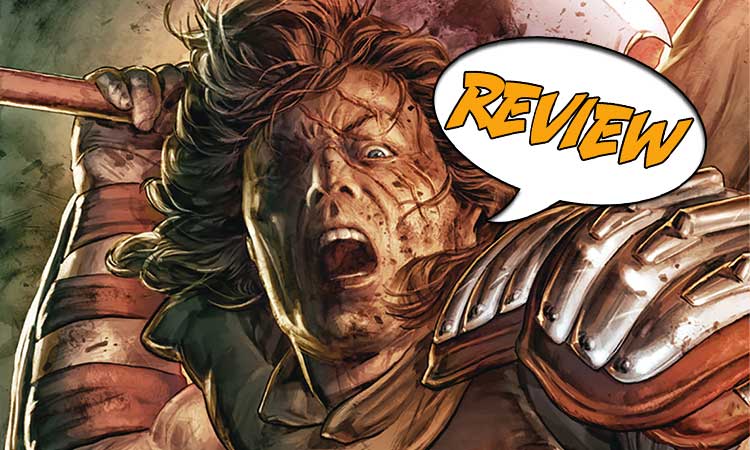 An Eternal Warrior, a young Geomancer, and a ruthless invader who can travel through the Deadside – and whose next target is Earth! The Valiant Universe introduces a new and ruthless villain who can move through the Deadside and has her sights set on Earth. Genocide doesn’t begin to describe what she is capable of. Fortunately, a Geomancer and her protector are ready to stand against her!

Incursion #1 doesn’t start out on Earth, but rather on a planet in the Cygnus Galaxy. Here we see the result of an incursion, which I also read as a metaphor for a major ecological disaster. Even on a world far from our own, it comes down to food shortages and resulting riots which stem from that. This is a world in chaos, in desperation, even dying. A scientist pleads his case to the apparent ruler, Imperatrix Virago (that name tells you a lot about her), begging her to halt the infection which has destabilized the world.

In the best tradition of selfish rulers, she blames the scientist for wrongly estimating how long their world could sustain her. As he realizes she had been lying all along, she admits she cannot stop the infection – and it’s the means by which she siphons off all the living energy from a world to herself to stave off old age. She keeps no one alive but the scientist, of whom she makes a trophy. We don’t even know his name, which further dehumanizes him. (Although technically he isn’t human, you get the idea.) I think this can also be read as a metaphor for the worst results that happen from colonization as well, a blunt and ruthless destruction of a place and its people all for the sake of its resources.

And then there’s the unexpected arrival of Syntilla, who is small and looks like a child, a vassal of the Imperatrix? A cohort? A friend? Her child? Can someone like the Imperatrix even have a friend? Syntilla has been scouting worlds for Virago, and is sure that she has found the one they’re looking for.

That planet, of course, is Earth. It’s difficult to pinpoint a time period here. When we see Tama and Gilad, they’re wearing boots and capes, and he’s carrying a medieval-looking axe. They’re camped out in what looks like an abandoned concrete bunker of some sort, which is located in Idaho. She’s a geomancer, able to make plants grow, and she doesn’t want to eat meat. In the dilemma of vegetarian/vegan diets, she needs protein and they’re in a situation where she does not have the luxury of a wide variety of foods to choose from. But her distaste for eating animals runs deeper – she can go into the Deadside, and she sees there some of the animals they’ve eaten for food. They look like they’re asking her “why?” (And isn’t that one of the questions for the ages?) Gilad, as the Eternal Warrior, has died and been brought back, and he has seen that question in the eyes of the dead as well.

Before long, these two threads of story meet as Syntilla arrives on Earth just shortly before Virago’s horde. In the ensuing fight we do find out exactly why Virago wants Earth, and how challenging a battle this could be.

It’s an interesting beginning. How difficult a challenge will it be to prevent the Earth from being utterly devastated? If the devastation takes root, is it even possible to stop it? I think there are some deep thoughts for consideration here under the surface of an action/adventure story.

THE SOFTNESS OF THE ART BELIES THE STEEL OF THE CHARACTERS

Incursion #1 is an incredibly beautiful book, considering the devastation that it depicts. The inking looks almost more like heavy pencil, which just gives it a different character. Edges are somewhat softer, and there is a great depth of shadows which gives everything a lot of texture.

The alien characters we see are all variants on humanoid, which is fine. It’s a pet peeve of mine that I would like to see much more variance in life around the universe, but then I’ve never thought that Earth is the center of everything either. They do have different skin colors (blue and purple) and some other structural differences.

I particularly love the coloring. While there is a wide variety of color, it is somewhat muted, so there isn’t the brilliant palette of a traditional superhero book. But there is great play of light and shadow, which I do really like.

Right from the get-go, there is interesting character development in Incursion #1, especially with Syntilla and Tama who appear to be girls, although they’re plainly both powerful beyond their apparent years. The stakes are huge, the villain is chilling, and the bit players are intriguing. Magic plays a significant part here, so this isn’t a hard science fiction story, but is it not classic fantasy adventure either, and it does fit in nicely with the Valiant universe.

93%
93%
Science Fiction With A Mystical Flair

The stakes are huge, the villain is chilling, and the bit players are intriguing.