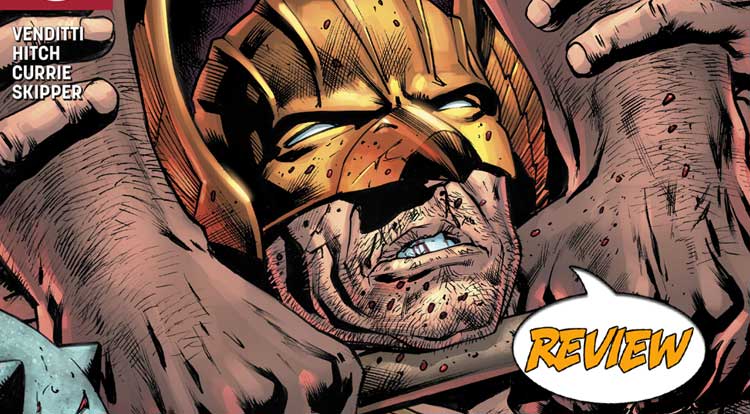 The Deathbringers have come…  and they’re after Hawkman’s head!  Your Major Spoilers review of Hawkman #9 awaits! Previously in Hawkman: The Deathbringers know where Hawkman is – and now they’re coming to Earth to claim him!  Carter will need to put all the clues together and fast if he’s going to save the world from mass destruction!

THE TRUTH BEHIND THE RESURRECTIONS

We open in the curio shop of Madame Xanadu in the center of swinging’ London, as Hawkman suddenly barges in (looking, I might add, for all the world like Indian Jones minus his hat.)  Having just encountered one of his past selves, Catar-Ol of Krypton, through some sort of psychic time-link thingama, he wants her to help him contact other former personalities, in the hopes that he can figure out the secret of the Deathbringers.  Xanadu mocks the name (which, I have to admit, might be awesome or might be a little too meta for my tastes, I’m not sure) but suddenly notices that he won’t have to wait to find out about said Bringers of Death… because they’re attacking!  Hawkman suits up and takes to the sky for some shouted conflict with his presumed-dead former colleague, Idamm, but ends up on the wrong end of a severe beating, and as we fade to black, it looks as though Hawkman is about to be ritually sacrificed to the alien warlords.

I’ve seen a lot of Hawkman books come and go since I started reading comics circa 1982, but this may be one of the most attractive of the lot.  Bryan Hitch makes Hawkman’s hard-to-render silhouette and helmet look great, adding modern superhero-movies texture and detail to what is essentially the original 1940 Hawkman costume.  The sight of the giant robots hovering over the city is awesome and cinematic, completely in character for the guy who gave us ‘The Ultimates’ and the amazing visuals of that recent JLA run, and all the aerial combat sequences look great.  The final page, depicting as it does the impending death of our hero is pretty incredible, too.  It’s kind of a bummer that the story isn’t quite as outstanding, as this issue feels more than a little cramped story-wise.  There are some tiny bits of foreshadowing as Carter and Xanadu converse in her shop,  but devoting a full five pages out of a total of sixteen to that discussion shortchanges the big confrontation sequence.  Of course, the presence of only sixteen story pages in a four dollar comic is in itself could be a problem.

BOTTOM LINE: NOT A BAD READ

Even with the issues in the pacing, this is a comic that delivers on the big moments with some excellent visuals, leaving Hawkman #9 with a better-than-average 3.5 out of 5 stars overall.  Given the difficulties in regulating and utilizing all the various threads of Hawkman history, the post-Dark Nights relaunch of his adventures has to be considered on in the win column, and this issue makes for a good, albeit short and oddly paced, read.

The dialogue is a little over-wrought, and I'd have enjoyed a bit more context, but the art is amazing.