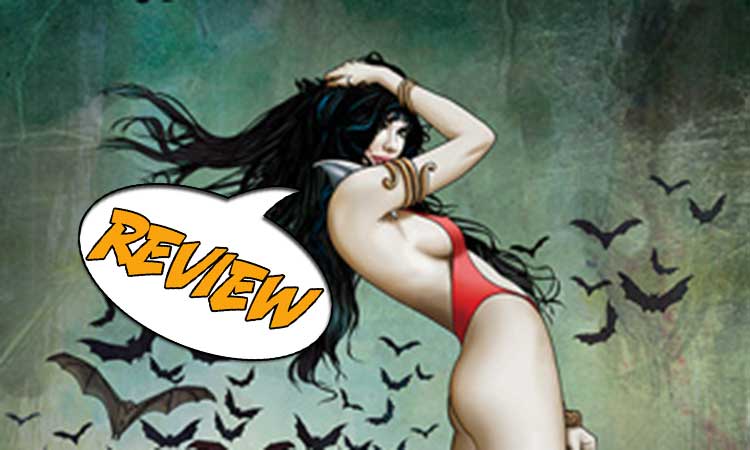 Most of us have had to deal with it, a Valentine’s Day ruined because of some, figuratively, bloodsucking ex. But did you ever wonder how a real bloodsucker spends Valentine’s Day? Let’s find out in the VAMPIRELLA VALENTINE’S DAY SPECIAL, on shelves now from Dynamite Entertainment. Previously in VAMPIRELLA: Vampirella has gained a reputation as something of a vamp with a heart, helping those under attack by the supernatural and monstrous forces that stalk the dark corners of the world. So when she gets a call for help and it involves missing children…

WILL YOU BE MY BLOODY VALENTINE?

In “Happy Valentine’s Day”, a sullen and determined Vampirella walks the streets of New Orleans on a mission. She has received a call for help, and when it involves thirteen missing children, she feels compelled to do what she can. So when she arrives at the home of Madam Toussaint, the woman who allegedly called her, she expects to be greeted with at least some hospitality. A door slam later proves her wrong and a moment after that she discovers the reason for the hostility. Pull out your monster manual kids, because our vampiric vixen has been called to the lair of a Lamia! It seems this snake woman is the reason behind the children’s disappearances, and Vampirella is determined to make her pay for the suffering she has caused. You see, the Lamia feeds on human children, swallowing them whole, and alive. This is not something which can be forgiven. But even as she contemplates on how she can destroy the creature’s eggs, she realizes she has had an audience. Blue jeans, leather jacket, long brown hair, the quintessential Cajun heartthrob. It was Val Boudreaux who arranged for Vampirella to travel to the Big Easy, and Val Boudreaux who has a motive behind it. The Lamia is not the only thing threatening New Orleans this night. He has hired to Vampirella to help him protect the people of New Orleans as they celebrate Mardi Gras, but us that all, or does he have a more selfish motivation.

Leah Williams (X-TREMIST, BARBARELLA/DEJAH THORIS) has a good sense of dialogue, her conversations flow well and seem appropriate for the characters and their personalities. She also continually brings original ideas to her stories and makes you want more. There are some great moments in “Happy Valentine’s Day”, such as when Vampirella discovers the real reason behind Val’s bringing her to New Orleans, it makes you want to just curl up with a blanket and remember how selfish you’ve been. Also, I really have to applaud her decision to write out the French Cajun accent. I won’t lie, I grew up reading Jonah Hex, and that is the number one example of how to write regional accents, but she nailed it pretty well here. I did have to re-read a few lines, as for some reason Pondas kept getting twisted in my mind as Pandas, but once you get it, your mental ear picks up the intended voice well.

The artwork in “Happy Valentine’s Day” is from Maria Sanapo (GRIMM TALES OF TERROR, JOHN CARTER: WARLORD OF MARS) and is excellent. She gets an old school action comic book feel and it makes the story, already dynamic, hit another level. There are great details, solid panel construction, and just enough eye candy to keep you going,. I do wonder though, was the decision on Val’s overall look by writer direction of the artist, as he looks suspiciously like another popular Cajun character. No complaints though, it really just stuck out to my eye.

The second story, “Matinee” is from comic luminary Michael Golden (MICRONAUTS, THE PUNISHER) and was originally printed in the 2005 Vampirella Summer Special #1. It is a quick tale, written and drawn by Golden, and uses the classic “Killer In The Room” device. It is a fun, well written, beautifully drawn, and completely classic tale that shows another side of Vampirella. You get that little, will she won’t she, at the end, and it makes the story so satisfying.

The Vampirella Valentine’s Day Special is a great little book which continues Dynamite Entertainment’s holiday-themed books. While the timing of the first story, the dates used lined up a few years back, has only a slight tie to Valentine’s Day, and the second has no real reference, it is still a book well worth picking up and giving to your honey.

The VAMPIRELLA VALENTINE’S DAY SPECIAL is a fun book with some great creators telling wonderful stories as only they can.

This is a great book to pick up for the Vampirella fan in your life, or to add to that box of chocolates for your sweetheart!