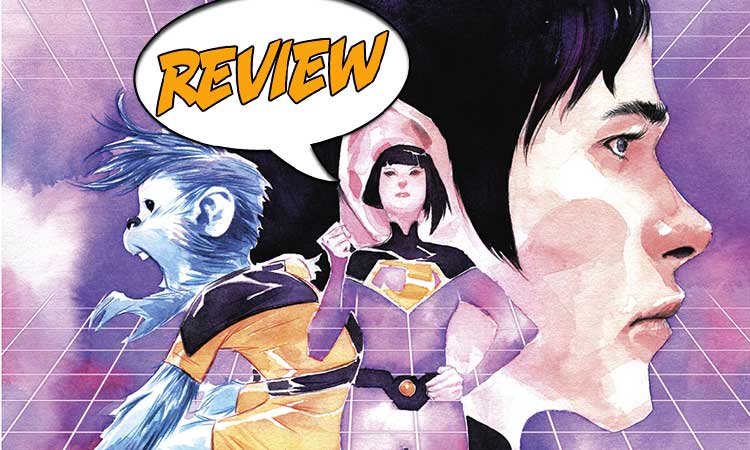 High school can be a challenge even at the best of times. Between the awkward puberty issues, the social cliques, the mountains of homework, and countless other obstacles, it’s a wonder people ever make it at all. But what if you were an alien from another planet, with your own challenges and issues? We find out what that is like with WONDER TWINS #1 from DC Comics. Previously in WONDER TWINS: The Wonder Twins, Zan and Jayna, leapt fully formed into the consciousness of young superhero fans when they appeared in The All-New Super Friends Hour back in 1977.  They made the transition into comics with Super Friends #7, published in October 1977. After the cancellation of the Super Friend cartoon series, it was many years before they made any appearances again, but there was that storyline in Extreme Justice….

HIGH SCHOOL CAN BE THE LOWEST

The school day at Morris High School starts out like many others, with the morning announcements being given by an eager young student. But this is not a normal high school and the young lady giving the announcements is not a normal, eager young student. Jayna is a new student, and her shyness and appearance have marked her as different, even at this school. But not as different as her brother Zan.  While Jayna is dressed in normal street clothes, with only her pointed ears to give away her actual nature, Zan is in full spandex, skin-tight hero mode. As he stands before the class to give his Heritage Day report, he tells of his home planet of Exxor. It sounds like a utopia, no crime, no poverty, no violence, it seems like it would be the greatest place to live ever, also possibly the most boring. Then Zan gets to the thunderstorms, or more accurately, the thunderstorm’s effect on the native Exxorians. Thunderstorms activate something deep inside Zan’s people and turn them from normal, boring, everyday Joes into wild, lustful, copulating sex fiends. Unaware of the inappropriateness of the conversation, Zan later meets with Jayna as they prepare to embark on their new after-school job, working the monitor at the Hall of Justice, home of the greatest heroes in the world. You see, Superman is a personal friend of their father. Due to some scandal or occurrence on their homeworld, the twins could not stay. Naturally, Superman, being the great big blue boy scout he is, offered to take them to Earth in hopes they could have a normal life. He walks the siblings around the Hall, explaining their duties at the dispatch center, and generally tries to make them feel comfortable. But when Hawkman discovers a disturbance tied to the 5th Dimension, Superman calls a Code Red, his old foe Mxyzptlk is on the loose! As the heroes rush to confront the 5th Dimensional Trickster, Zan and Jayna are left to their own devices, which includes calling up the old Hall of Justice A.I., the Supercomputer. Later, a haggard Superman suggests they go home. Mxyzptlk is still a threat, and they have school. But what happens at school the next day could have dire repercussion for one of the twins, and even worse, they come face to face with an enemy who even the Super Friends fear.

Wonder Twins is a six-issue series being released under DC Comics’ Wonder Comics imprint. These Wonder Comics are aimed at teen audiences and are meant to show the trials and tribulations of being a teen hero. This series is being written by Mark Russell (EXIT STAGE LEFT: THE SNAGGLEPUSS CHRONICLES, CAVE CARSON HAS A CYBERNETIC EYE) and contains that brand of humor, pathos and ethos which he has become known for. The Wonder Twins have been a joke in the DC Universe for years, and fans often point to them as the worst sort of pandering to an audience due to their creation solely to lure kids to watch the cartoons, and their undeniable original resemblance to Donny and Marie Osmond. Russell has taken that into account and even embraced it. He knows that these are ridiculous characters, and instead of trying to make them hip and cool, or parodies, he just makes them teenagers. The world they are in, with its Super Friends references and character cameos, is wonderful. Despite a little mature content (the descriptions of Thunderlust) it is oddly wholesome. It would have been easy to throw them around as the butt of everyone’s jokes, which Zan actually is in danger of, but he takes it a little further and fleshes out the characters and their motivations. It makes for smart writing that is enjoyable.

Artist Stephen Byrne (JUSTICE LEAGUE/POWER RANGERS, GREEN ARROW) is a great pick for this book. His heroes are realistic, with normal proportions which look heroic without being inflated. Calling back to the visual design sensibilities of the Super Friends cartoon, and combining it with a flair of the modern DC Universe, it fits well and makes for a friendly read.

BOTTOM LINE: FUN AND SELF-AWARE WITHOUT BEING SATIRE

As I already stated, it would have been easy to portray these characters as parodies of their more popular personals. We have seen this in the Extreme Justice series as well as in the New Adventures of the Wonder Twins cartoons. Russell decides to flesh out these characters and give you a reason to read beside the cheap ten cent jokes. He is laying little callbacks to address later, and adding more depth to these characters than they may have ever possessed in the entirety of their published history. My only question is when does Gleek show up!

WONDER TWINS #1 is a good comic for teens just beginning to wonder if there is anything in comic books specifically or them, or for that older fan who has memories of waking up with a bowl of cereal on Saturday morning to watch their favorite heroes on tv.

WONDER TWINS #1 looks to be the start to a great little series re-imagining some of the most underused characters in the DC pantheon.