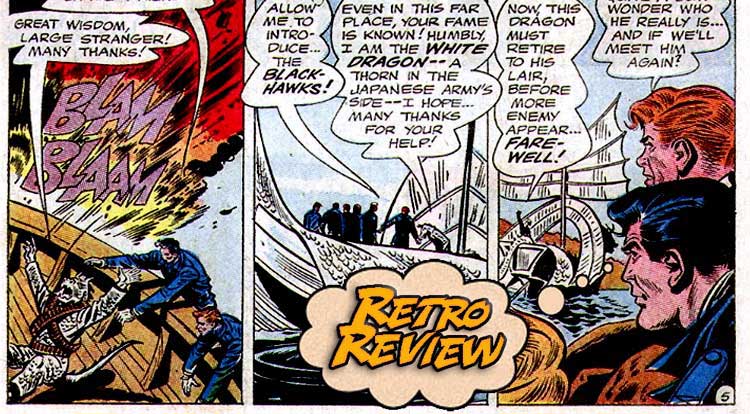 It’s the very first crossover event between Retro Review and our Flashback podcast!  Stand by for the origin of Blackhawk Chop-Chop!  Your Major Spoilers (Retro) Review of Blackhawk #203 awaits! Previously in Blackhawk:  Originating at Quality Comics right before the United States entered World War II, the adventures of The Blackhawks were initially something of a group effort, with their creation coming of a collaboration between Will Eisner, Bob Powell and Chuck Cuidera (who is the credited inker on this issue, some twenty years later.)  Described as “a modern version of the Robin Hood legend” by Eisner, the Blackhawks were a multi-national group of aviators fighting against the Axis powers.  Naturally, a few stereotypes came with that “multi-national” element, such Frenchman Andre being a suave ladies man or Swede Olaf shouting “Py Jiminy!” when riled.  And then, there was Chop-Chop, originally the team’s comic-relief cook.  Hailing from China, he began as an incredibly cartoonish stereotypical Chinese character, wearing clownish pajamas and a queue and speaking pidgin English.  (HIs original roly-poly, buck-toothed visual can be seen here.)   As times changed, so did the acceptability of such a horrific stereotype, leading Chop-Chop to evolve somewhat (though the limitations of four-color printing kept him a bright orange hue) and by 1964, Chop-Chop was a full-fledged pilot in the Blackhawk Squadron.  But how did that happen, you ask?  It all began in a prison camp very reminiscent of ‘Hogan’s Heroes’, where Blackhawk, Olaf, Hendrickson, Andre, Chuck and Stanislaus are being held.  When they get the order to break out, the team leaps into action… Hours of flight time later, the Blackhawks parachute into Chinese territory and immediately encounter a man in a dragon costume putting the hurting on Japanese invaders.  Realizing that the enemy of their enemy is likely a friend, regardless of big scaly mask, the ‘Hawks assist White Dragon in routing the Japanese patrol.  Wishing them good luck, the dragon-man sails away, leaving the Blackhawks to make their rendezvous. Khan Huang, the local leader, isn’t willing to fight against the incursions of the Axis soldiers, and his son Li openly scorns the Blackhawks’ stupidity.  Unfortunately for Li, his father strikes a bargain with the Japanese invaders to capture the White Dragon who has vexed them, only for Khan to discover the face under the mask is…  his own son!  Sentenced to death, White Dragon is saved at the last second by the Blackhawks, but Li Huang explains the terrible truth: Having been captured and “lost face”, he can no longer lead his rebels and is essentially persona non grata among the community.  That’s not the only surprise that the flyers find in the strange land, though. Declaring that the team that saved him is now his home, Li Huang is told that he has to fight his way into Blackhawk Squadron (which seems a bit odd to me.)  He’s not particularly worried, as his skills are more than up to the task of taking down one former circus strongman.  Li takes down the powerful Pole, striking with unspecified martial arts prowess, punctuating each strike with a fierce cry of “CHOP-CHOP!”  The Blackhawks and Huang the younger attack the walls of his home town, fighting their way through the occupation forces. The team of Dillin and Cuidera make for clear and easy-to-follow visuals throughout the issue, without having to resort to anything flashy or over-the-top to get there, a classic Silver Age take.  Rushing to his father’s home, Li Huang and Blackhawk arrive just in time to save Khan from execution, and Li even manages to save Blackhawk’s life with a well-placed Chop-Chop attack!  What to do now that each of them owes the other a life-debt? This issue’s reconned events make for a number of issues for continuity buffs (notably its setting near the END of WWII, ignoring stories which have Chop-Chop with the team at the dawn of the war), and DC has officially designated this as one of the stories that take place on Earth-32.  (That world is home to a number of stories written by Bob Haney, the story where Superboy found Jor-El and Lara in suspended animation in space as well as The Golden Age limited series by James Robinson.)  A few years later, the Blackhawk title would “reveal” Chop-Chop to be one Wu Cheng, with his nickname becoming “Chopper” for a bit, and all subsequent revivals having to find some way around the issue of the team’s Chinese member.  Blackhawk #203 tries to fix a problem but ends up creating additional issues in so doing, with solid-but-unremarkable art and a story that is at least more culturally sensitive than back in 1941, earning 3 out of 5 stars overall.

(If you’re wondering how today’s Retro Review came about, I recommend checking out our Flashback podcast, available to Patrons at the $5 and up level at Patreon.com/MajorSpoilers!)

It's interesting to see the various attempts to make the character of Chop-Chop work, but this one actually raises more questions than it ever answers.