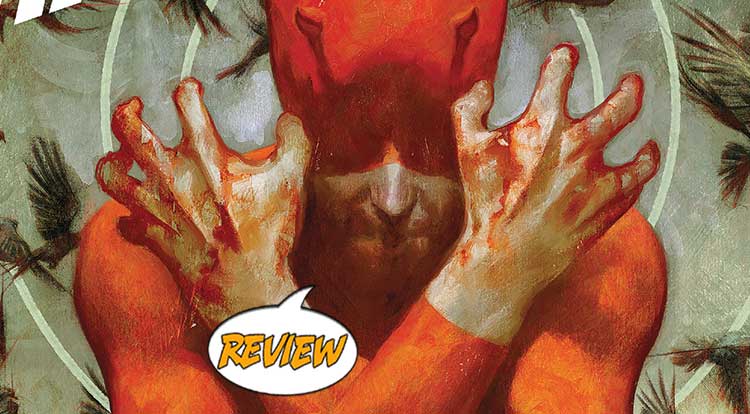 It’s a brand-new day for the Man Without Fear!  Your Major Spoilers review of Daredevil #1 awaits! Previously in Daredevil:  As a child, Matt Murdock lost his sight in an accident involving radioactive chemicals.  Though he can no longer see, the chemicals heighterned Murdock’s other senses and imbued him with an amaxing 360-degree radard sense.  Also, there were ninjas at some point.  Now, he is the protector of Hell’s Kitchen, the man called Daredevil!

This issue starts in a smoky dive bar, where a beautiful young woman strikes up a conversation with a strange man in a big coat.  They flirt a bit, and when he asks her the time, she points out the clock right in front of him and starts to ask if he’s blind.  Matt Murdock shrugs off the unintentional slight, instead taking his pain meds and continuing to flirt.  Cut to the next morning, as they awake in his bed, with the young woman telling him how liberating it is to be with a man who can’t see her or wonder about what her expressions mean.  After she leaves, Daredevil takes to the streets, but after his terrible injuries (he was hit by a truck near the end of the previous run of the book), he’s not 100%.  Not only does he nearly fall when leaping from building to building, he is overwhelmed by three low-level thugs, forcing him to blinding lash out in order to escape, leading to an accidental death.  All the while, Matt flashes back to his interactions with Father Cathal, the priest at his childhood parish, giving us an interesting look at his take on the balance of religion, law and vigilanteism.

I ADMIT, I WAS WORRIED ABOUT CHIP’S COMEDIC TONE

Having enjoyed Zdarsky’s work on the likes of ‘Howard The Duck’ and ‘Sex Criminals’, I worried about a clash of tones with the usually-dark Daredevil.  Instead, what I got was a fresh DD, one that keeps all the elements of previous stories with a new tone, as Matt Murdock wryly comments that Foggy wouldn’t approve of his one-night stand and imagines his own obituary after nearly losing a fight.  The introduction of hard-nosed police detective Cole North complicates matters in a good way, adding a law-and-order character who isn’t corrupt but still has problems with Daredevil, and the final page reveal that Daredevil accidentally killed a man gives the Kingpin new ammunition against our hero.  Checchetto’s art is top-notch throughout this issue, and I appreciate the slight tweaks to Daredevil’s traditional costume (which for once don’t feel unnecessary or TV-show-inspired) seen in this story.  Best of all, the rendition of Matt Murdock’s casual hookup doesn’t feel awkward or prurient, instead serving to show us how affected he is by the recent traumas in his life.

Marvel’s current model of relaunching a book with a new number one when a new creative team takes over has a lot of positive elements to it, and this issue is a perfect example of why.  Daredevil #1 gives us new perspectives on a fifty-year old character with excellent art, some ingenious scripting and the introduction of a couple of characters to expertly help shape the narrative, earning 4 out of 5 stars overall.  If you are in any way worried that this DD won’t be able to follow up on Soule’s excellent run, I’d say: Worry no more.

A damaged Daredevil stuck in a world where his worst enemy is the mayor may *sound* familiar, but it's a whole new take on Matt Murdock.