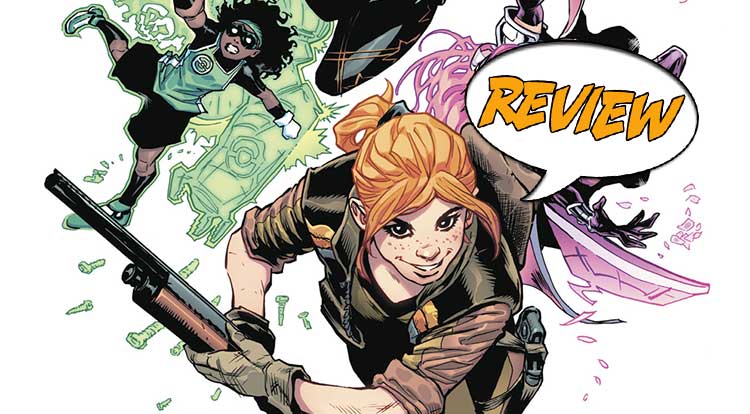 Scattered around Gemworld our young heroes try to figure out where they are and what the heck is going on! Previously in Young Justice: Things are not going so well on Gemworld – whenever there is a Crisis on Earth, it has unintended consequences in the Gemworld. Meanwhile,m in Metropolis, Jinny Hex gets pulled over for driving with a broken taillight, and then suddenly a rift opens and a variety of warriors from Gemworld show up and demand to see Superman (who, by the way, is not around). Robin arrives to fight them, and Jinny helps. Maggie Sawyer and her team from Special Crimes arrives on the scene and are soon surrounded until Impulse moves them to safety. In short order, Wonder Girl and Teen Lantern also get involved and there’s a standoff until a portal opens up. Robin finds himself under the sword of Amethyst in Gemworld. And Impulse finds himself in a field of twisted, decayed plants where he runs into Superboy.

WE’RE NOT IN METROPOLIS ANY MORE

As Young Justice #2 begins, we get another peek into the troubles in Gemworld. The royalty here are all named for gemstones, and Lord Opal seems to be at the top of the heap, and he would reward someone, such as Prince Moonstone, dearly for Princess Amethyst’s head. As if on cue, she comes crashing in, sword and shield at the ready. Princess Amethyst is not going to make this easy for them. And she has an ally in Robin, who comes in riding her winged horse.

Not everyone landed in the same place. Jinny Hex – and her truck – landed in Topaz, and they’re surrounded by a green glow – Teen Lantern, of course, but Jinny doesn’t know that yet. She tries talking to it and gets no response, so falls back to her shotgun. That’s when Wonder Girl warns her not to do that. She comes out, showing her hands, and introduces herself, and tries to figure out who Jinny is.

We get a flashback for Wonder Girl from weeks ago, when she fought Despero at a high school in Florida. The local law enforcement asks who she is, and should they have heard of her? She starts to explain, and then sees an older gentleman in a trench coat. This is her grandfather, Zeus, and they meet in the air some distance away. He’s being friendly; she is suspicious because he’s never come to Earth to visit her before. He professes that he wants to take responsibility for teaching her and to give her a gift – an incredibly powerful amulet. I really like her response here. If this is indeed something that powerful, why is he just giving it to her? What has she done to deserve it? And she turns it down. This is not an unreasonable decision, and in fact, from a storytelling standpoint, it’s a great decision. What has she given up? Was this a better or worse choice?

Back in Topaz, Teen Lantern recognizes Wonder Girl, and Jinny has no clue what’s going on. Wonder Girl has them get into the truck and she flies them up so they can see what’s around them. Robin and Amethyst, and the horse, crash into them, and they all fall back to ground level, landing cushioned thanks to Teen Lantern. There are brief introductions, and Amethyst mentions that they’re in her kingdom. Cue the grand entrance of Lord Opal, who says they all belong to him now.

The opening scene of Young Justice #2 is Lord Opal at the top of a ridiculously tall staircase to nowhere, flanked by a couple spires and overlooking cities far beyond him. It is a stark and alien setting and in one panel it reminds us that the Gemworld has been having problems. There is some lovely inking of the shadows here too.

That tone in the art carries through. Most of Gemworld that we see in this issue is dark. There are a lot of rich blues and purples. As we see some of the people (and creatures, such as the horse), we see that gems are part of them as well, not just as set and polished jewels, but also as uncut crystals. They’re part of the design of the armor, clothing, even directly part of people. It gives Gemworld a distinct flavor.

I like the characters. They are young people, and they honestly look young, around high school age. I also like the costume design. Wonder Girl’s, in particular, stands out. This may just be me, but I appreciate an athletic hero who wears more practical footwear, and she has sneakers, which work just fine for kicking monsters around. The combo of leggings, skirt, and jacket give her the flexibility of a costume that looks more like actual clothes.  And I love Teen Lantern, who appears mostly in some kind of projected exo-suit, but with an attitude that makes it more expressive than I thought possible.