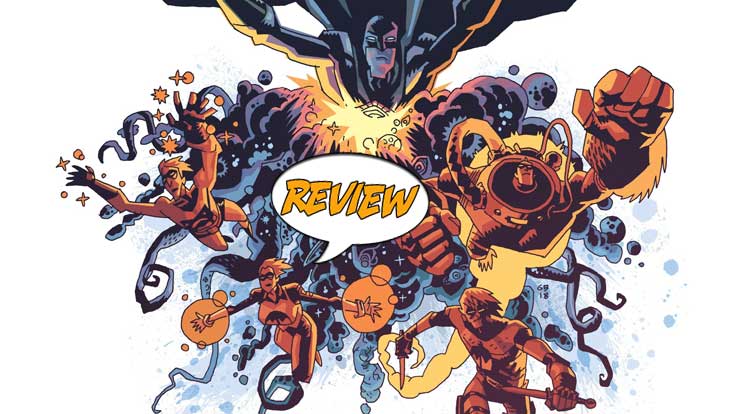 Previously in Umbrella Academy: Hotel Oblivion:  At the height of their popularity and adventuring, the Umbrella Academy had no idea their leader, Reginald Hargreeves, had created an off-world prison to house their worst opponents. Now, a few years after his death, Hargreeves’s inhuman plan has gone terribly wrong, and the Umbrella Academy are not ready for Earth’s nastiest villains . . .

This issue opens with a car crash that is also a flashback (although it’s not identified as such, other than the presence of younger versions of our heroes and the presence of the deceased Monocle) involving the capture of Perseus IX, who turned to crime out of what is identified as jealousy.  Cut to the present, at the extradimensional Hotel Oblivion, where many of the Umbrella Academy’s enemies have been kept, including Perseus’ friend/weapon, a flying head, as well as his son, who finally found his lost father.  At the same time, in After-Space, Spaceboy and his crew discover a tear in space that leads them right to Hotel Obvlion, just in time for a mass escape, engineered by Perseus the younger.  In Paris, Vanya, the White Violin has an inexplicable moment where she discovers that she can, in fact walk, thanks seemingly to her friend who is not named in the issue.  As the issue ends, a Cthu’lian nightmare creature erupts from the sky above the Hotel Oblivion, while the team splits up to find out what exactly is going on.

THIS IS ALL REALLY WEIRD, IN THE ‘GOOD WEIRD’ WAY

The first thing you might want to know is that there is nothing in this issue that identifies the wheres, whys or even the names of the characters, so it’s not an ideal place to jump in to the Umbrella Academy series.  As someone out of the loop, I found it really hard to DESCRIBE what happens in this issue, but I still enjoyed it.  Bá’s art is luscious on every page, with elements that remind me of Mike Mignola and Alex Toth in different moments, and even moments that I can’t quite fathom are fascinating to look at.  The story is likewise complex, including a moment with a corpse that I still can’t quite figure out, but I was fascinated to read about anyway.  The Umbrella Academy is a book with a large cast and a lot of story elements to bring together, and this issue covers a lot of territory.  The downside of it comes in the fact that almost no one is named in these pages, even in conversation or brief asides.  The changes of scenery are identified by location, but there’s no delineation between flashbacks and present time, and this issue may take multiple reads to fully parse.

Even with the occasional obscurity of the storytelling, it’s clear that this creative team knows what they want to do and has a clear vision of this book and the Umbrella Academy’s characters.  Umbrella Academy: Hotel Oblivion #5 isn’t the most accommodating read to leap into, but it’s worth the time it will take you to get acclimated, with lovely art and complex story interacting and giving us a big adventure on multiple fronts, be it universal-scale madness or personal accomplishment, earning 3.5 out of 5 stars overall.  Now, I’m gonna go re-read the series from the beginning.

It's a little bit hard to jump right into this cast in the middle of a massive undertaking, but the art and storytelling help to get you engaged.