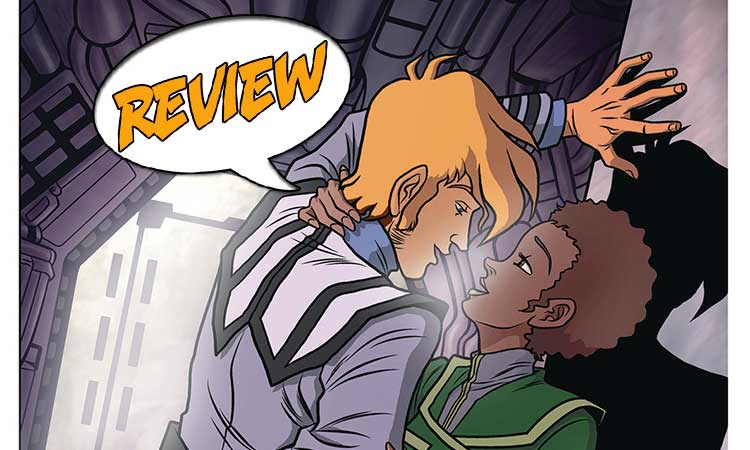 Super Dimension Fortress 1 sits in orbit above the Earth, injured by a blast from one of Earth’s most powerful defense weapons. Nevertheless, life goes on inside the mighty ship as Rick seeks out Minmei, Lisa is reunited with Karl, and Roy attempts to strangle Claudia! What?! Find out more in ROBOTECH #17 from Titan Comics. Previously in ROBOTECH: Karl Riber, who had been reported as killed in action, returned and helped push the Zentraedi attackers into a defensive position. Miriya was defeated and Admiral Hayes fired the Grand Cannon, directing it on the Zentraedi forces, but seriously damaged the SDF-1 in the process. On ship, Claudia prepares to confront Roy regarding the footage she saw of him and Captain Gloval. It does not go well.

LOVE IN A TIME OF MECH COMBAT

Within the Zentraedie strategic operations hub, Supreme Commander Dolza and Commander Azonia are reviewing the footage of the Grand Cannon blast that caused his forces to retreat. They conclude the Grand Cannon was reverse engineered from Masters technology, and it causes them to recalculate their assessment of the threat which they could pose. Dolza declares orders Azonia to stay the course until he arrives. He plans on bringing the full fleet with him and destroying the Earth. If they are unable to recapture the SDF-1, then it will be destroyed.

On the SDF-1, Captain Lisa Hayes is preparing her crew for a long voyage home. The citizens of Macross Island, who still live on the ship, need to be cared for. Captain Hayes has a plan to go to the remains of Mars Base for supplies. Dr. Lang reports that, while there is to much damage to transform the battleship, he has taken care of an ion trail which was allowing the Zentraedie to follow them, and he is attempting to modify the shields.

Claudia, after confronting Roy, finds herself in a dire situation. Roy, or rather, the clone of Roy, is attempting to strangle her for uncovering the secret that he is responsible for Captain Gloval’s death. She escapes his grasp and runs from the room, but Roy pulls his blaster and fires.

Rick has traveled to the city the Macross citizens have made for themselves in an effort to find Minmei. After previously being blinded, he now has a strange new sight, possibly granted by his exposure to Protoculture. Minmei was with him at the time and he wants to see if she has been affected.

All this in the first eight or nine pages and you haven’t even gotten to Captain Hayes dealing with the sudden appearance of her old flame in the form of Karl Riber, the pursuit of the Roy Fokker clone, and more.

NOT YOUR PARENTS PROTOCULTURE

For a generation of fans, Robotech was their gateway into the world of anime. I remember watching it on television and while I was at first drawn in by the mechs, the story proved to be more than mindless, done-in-one stories. I remember the shock of watching Roy Fokker die, as it was the first time I can remember seeing a main character in a cartoon killed off.  It has a special place in my heart, and I am thrilled that Simon Furman (The Transformers, Alpha Flight) has been writing this re-imagining of the series. Overall, the stories follow the general idea of the original, but he has presented a new vision, an alternative take, on the well-known story and made it fresh and new while remaining true to underlying stories that have been enjoyed by many. He is weaving multiple plots together and much like the original television series it has a very organic feel.

This issue is split between two artists. The first seven pages are by Hendry Prasetya (Mighty Morphin Power Rangers, God Complex: Dogma), with the remaining pages by Pasquale Qualano (Grimm Fairy Tales, Dejah Thoris). For anyone worried there may be a charring difference in style, don’t. I actually never noticed it when I was reading the book. Even when I went back and counted the pages, the transition is handled so well I was hard pressed to find any glaring difference. This is a complement to both artist, as they meshed their styles so well it never interrupts the feel of the story.

BOTTOM LINE: A GRIPPING STORY WITH A NEW FRESH LOOK ON A FAMILIAR STORY

I read the old Comico adaptations of the Robotech series back in the day, and that is essentially just what those were, adaptations. As entertaining as they were, you learned very little not in the original episodes. Here Furman has started the familiar story and diverged from the well-worn path to create a new and exciting chapter. Dead characters alive, alive characters dead, it all feels fresh and in no way disrupts the memory of the original. By not using a solid manga or anime art style the series is allowed to gain a visual clarity, mesh with the new story, and forge its own future.

Fans, old and new, should pick up the new Robotech series, and ROBOTECH #17 is a great place to start.

An exciting breath of life into a beloved series, with modern interpretations of the characters and bold new storylines.