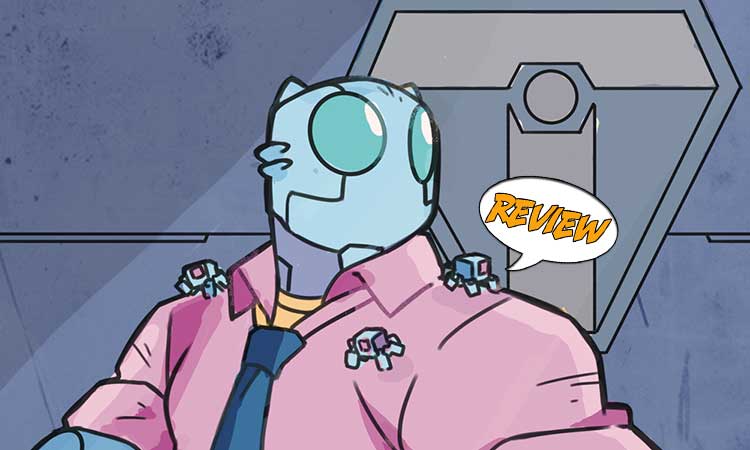 It’s another day at Tesladyne Institute, a beautiful day for exploration, experimentation, and a vacation! Nothing could possibly go wrong. Or could it? Previously in Atomic Robo: Dawn of the New Era: We’re getting back to normal (such as it is) at Tesladyne Institute. Robo is secretly building and working with Alan, giving him a robot body and teaching him all kinds of stuff. We meet Olivia, Margot, and Ben – the three new interns! Robo drops Bernard off at a nearby volcano he’s going to explore with Dahlia, their latest exoplanet explorer. Not too long after that, Vik and Lang set off on a well-deserved vacation.

GETTING THE BALL ROLLING

Atomic Robo: Dawn of the New Era #2 starts out quietly continuing from last issue. Vik and Lang arrive at Los Alamos. No, this isn’t their vacation…exactly. They’re just dropping in to say hello, and Lang has arranged for Vik to have some accelerator time later.

Robo continues working with Alan, who has an entire humanoid body now and has to learn how to use it. Walking on two legs is a bit of a challenge at first, but Alan cracks a joke about it. No doubt about it, he is a pretty sophisticated robot. Then things take a more serious turn as Alan asks if he died. As Robo says, “That’s…complicated.” But the important thing is that he is here, and is himself, now.

The interns sneak out at night to explore a small building on the edge of the grounds. It is locked. Margot tries to pick the lock – it should be an old and simple one – only to be startled when Olivia opens the door from inside. (She crawled in through a window.) There are junk and old files inside, but with a few couches, it could make a place to hang out. Ben pokes around at an old typewriter, and that activates a trap door in the floor!

Bernard is having some trouble phrasing his log entries. He feels like he’s making progress, but things also seem odd. He finds one of his trail markers, which is strange, because as far as he can tell, he’s been walking in a straight line through the tunnels. He checks navigation data from Dahlia and finds he’s walked seventeen…thousand…miles? Darned GPS issues.

The next day Foley is working with the interns. She had them work on designing a paper airplane. They designed a theoretical plane (out of hypothetical material) which has warp drive. Foley lectures them on the appropriate level of “impossible” to have.

Bernard has Dahlia’s lights fired up, and sees more light from further down the tunnel. He strides on ahead only to come back to where he was from the other direction. He’s three days into his exploration and losing his mind. Or is lost. Or possibly both. Dahlia pats him on the back.

Back at Tesladyne, Alan is getting pretty good at walking, but catching a ball is a whole new puzzle. The interns successfully design a paper airplane that they can make and test. And that night, they explore the basement of the shed and adopt it as their clubhouse. Now they just need to figure out a name for it.

Vik and Lang’s half-hour stop at Los Alamos has become a couple days of conferences. This was Lang’s actual surprise gift to him! They may feel out of place in beachwear, but gosh it feels good to be doing some actual science for a change! Someone comes to get them for the next meeting, but when they open the door to the meeting room, it is full of…vampires?

The art in Atomic Robo: Dawn of the New Era #2 is breezy and energetic. We who have been reading for a while are used to the bold, simple lines. One of the things that is really fun about this arc is that we’re getting even more robots. I like robots in general, but I like that they all have their own styles, and even Atomic Robo himself has evolved. Alan has a cool look – more slender than Robo, definitely humanoid, but with a more modern look and articulation. I enjoy his faceplate, which also functions as a screen, which he uses to communicate nonverbally.

And then there’s Dahlia. For an explorer and a robot who is not humanoid, she really is expressive. She’s rarely just sitting around; she does things. And it is very sweet when she reassuringly pats Bernard when he thinks he’s losing it.

I really love the use of color in this issue. There are a lot of things going on, as well as time passing. Each scene gets its own color palette, and while they may be somewhat muted, they certainly are colorful, especially Los Alamos, which just happens to complement the vacation clothes Vik and Lang are wearing. Robo’s lab is mostly gray, but bright and pale, making it resemble a sterile robot lab. And then there are the night scenes with the interns. The colors may be more limited, but there are still a lot of them, plus there are some fun play of light and shadows. I particularly like the light catching dust particles when the trap door opens.

BOTTOM LINE: A MYSTERY JUST AROUND THE CORNER